Suspects have connections to Chinese government 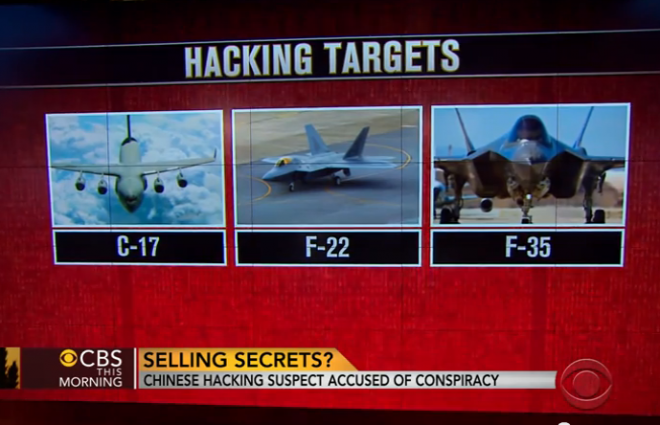 In May, the Obama Administration announced a crackdown of Chinese cyber espionage. The grand jury indictments charged five Chinese People’s Liberation Army members with hacking the computers of a number of U.S. businesses and organizations.

Now the U.S. government alleges that Boeing was the target in a new round of Chinese cyber spying.

Su Bin, the owner of a Chinese aviation-technology company with an office in Canada, conspired with two unidentified individuals in China to break into the computer networks of U.S. companies to get information related to military projects, according to charges unsealed yesterday in federal court in Los Angeles. Su advised the two others in China on what data to target, according to the charges.

Su’s alleged co-conspirators claimed to have stolen 65 gigabytes of data from Boeing related to the C-17 military cargo plane, according to the criminal complaint. They also allegedly sought data related to other aircraft, including Lockheed Martin’s F-22 and F-35 fighter jets.

As was the case with the indictments in May, there appears to be direct evidence linking Su Bin and the Chinese government.

Laura Eimiller, a spokeswoman for the FBI in Los Angeles, declined to comment on the people or entities that Su worked for.

The two unidentified Chinese individuals are “affiliated with multiple organizations and entities in the PRC,” according to U.S. prosecutors, using the initials of the People’s Republic of China.

They are involved with an “entity” that has set up technology bases and does surveillance work and intelligence collection outside China to “avoid diplomatic and legal complications,” according to the criminal complaint, citing a report one of the two individuals sent to the other.

They helped gather information about 32 U.S. military projects, many of which involved multiple defense contractors, according to the filing, citing a Feb. 27, 2012, email between the two Chinese individuals. Su has been working with the two other individuals since the summer of 2009, according to the criminal complaint.

Although Boeing and the FBI deny that any classified material was stolen in this latest hacking episode, the pattern of Chinese cyber spying doesn’t seem to be waning. In unusually strong terms, Secretary of State John Kerry went out of his way to condemn this Chinese cyber spying during his meetings in Beijing earlier this week.

“Instances of cyber theft have harmed our business and threatened our nation’s competitiveness,” Kerry said at a joint closing session of the sixth annual strategic and economic dialogue, as it wrapped up its second day. “The loss of intellectual property through cyber [spying] has a chilling effect on innovation and investment.”

Kerry was specifically reacting to reports in The New York Times on Wednesday that the U.S. Office of Personnel Management was a recent Chinese target as well.

Chinese hackers in March broke into the computer networks of the United States government agency that houses the personal information of all federal employees, according to senior American officials. They appeared to be targeting the files on tens of thousands of employees who have applied for top-secret security clearances.

The hackers gained access to some of the databases of the Office of Personnel Management before the federal authorities detected the threat and blocked them from the network, according to the officials. It is not yet clear how far the hackers penetrated the agency’s systems, in which applicants for security clearances list their foreign contacts, previous jobs and personal information like past drug use.

I feel for the shareholders of Boeing … but it’s hard to sympathize with the gubmint rhetoric knowing full well that they spy on the Chinese government and companies with equal fervor. [plus US citizens]

I’m sure if the Chinese just asked, Obama would have told them whatever they wanted to know.

I am amazed that the Boeing unions aren’t raising hell because the Chinese hackers were non-union.