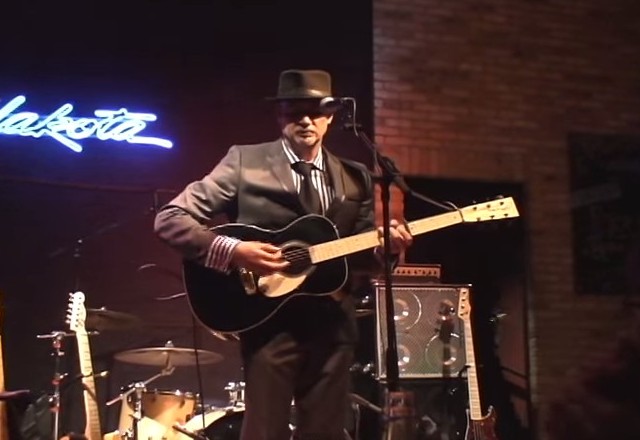 My father just told me about this song by Peter Himmelman, “Maximum Restraint.” Himmelman, in addition to being a singer-songwriter in his own right is also Bob Dylan’s son-in-law.

In the song, Himmelman mocks calls for Israel to exercise “maximum restraint” in response to rocket attacks.

Here’s a taste of the lyrics:

They’re shooting grads and quassams, from hospitals, mosques and schools
When they photograph their dead and dying Hamas just sits and drools

Another photo op to take, take straight to CNN
they paint Israel as the aggressor – and then it all begins again

Himmelman like his father-in-law is a folk rocker from Minnesota. His defense of Israel and criticism of the world’s hypocrisy echoes Dylan’s 1980’s release “Neighborhood Bully” which included this lyric:

Then he destroyed a bomb factory, nobody was glad
The bombs were meant for him. He was supposed to feel bad

I guess the times haven’t a-changed all that much.

Message to Israel, when you have Hamas in the cross-hairs “Don’t think twice, it’s all right”.

Or, when Kerry and Obama talk to you, remember it’s just BS “blow in’ in the wind!”

The Israeli gov’t needs to be very careful concerning itself with morality in warfare, particularly against an immoral, unprincipled, fanatical enemy. Allowing such moral considerations to cost victory over a foe who promises to annihilate an entire nation would be senseless. During WWII the U.S. fought against an enemy similar in beliefs and dedication to Hamas, the Japanese Imperial Army. In the end, we needed to abandon any concern for “civilians” in that conflict because there were none. In 1945, every Japanese was mobilized and expected to fight (Even babies and the mentally infirm were to be used as human shields.) Most were willing to die for their beliefs. When we convinced them we were willing and able to kill them all, hostilities ceased, but two atomic bombs were necessary to demonstrate the empirical evidence.