“Is there hope for liberal television after all?” 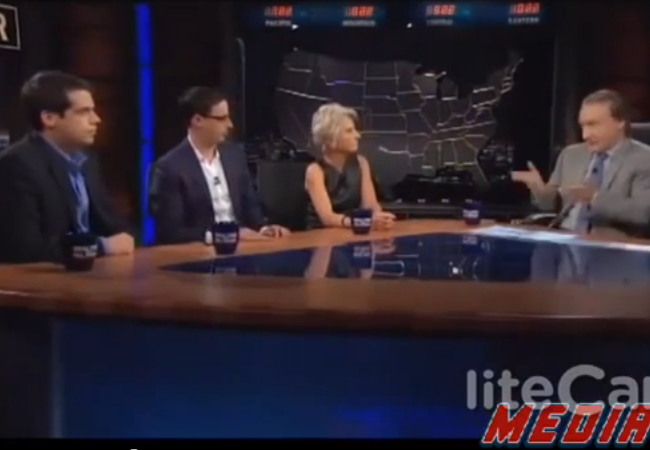 This is remarkable if you know anything about Bill Maher and his audience. You would have to switch channels to MSNBC or the Daily Show to find a more progressive crowd.

I’ve never been a fan of Bill Maher but to his credit, he did anger many progressives on Twitter this week by standing up for Israel.

Jamie Weinstein is a senior editor at the Daily Caller. I met him at CPAC in March and he’s a very smart guy. Last night he was a member of the panel on Maher’s show and his defense of Israel drew applause from the audience.

Is there hope for liberal television after all? Probably not, but for a brief shining moment one conservative rocked the epicenter of the lefty airwaves with such righteous force that HBO viewers are still trying to figure out if they should be terrified, impressed, or some combination thereof.

Daily Caller senior editor Jamie Weinstein appeared on “Real Time with Bill Maher” last night with former Democratic Rep. Jane Harmon and predicter-of-things Nate Silver. Maher actually agreed with Weinstein that Hamas deserves the blame for the conflict in Gaza (a bit of a different tune than Maher’s 2001 knee-slapper that terrorists are “not cowardly”), and then something happened that only Nate Silver would be able to tell us the likelihood of.

“What did Hamas use the money they had for? They built underground tunnels to attack Israel with and hide their weapons, not protect their people,” Weinstein pointed out, prompting a Real Time audience applause break. Bill Maher’s audience actually applauded a conservative for laying out the facts!

Here’s the video via Mediaite:

This is good. Finally! Thanks for sharing it.

Maybe there is still hope for these progressives…and for our country.

Now we should help these liberals see how much they are like Hamas, i.e., feckless in improving life for the citizenry but expert in fomenting unnecessary wars against perennial boogeymen such as fundamentalist Christians and the imaginary foes of contraception.

Americans across the political spectrum are generally people of good will. They may differ in what they think they want the government to do, but they like truth, justice, and liberty for all. Now that they are paying attention to Hamas, they are finding out what Hamas is all about.

Good to hear, but I won’t watch even a second of Maher until he apologizes to our troops, Sarah Palin, conservatives and Republicans generally, the Tea Party people in particular, and spends an appropriate penance in sackcloth and ashes.

If there is ever a video clip of someone beating the living hell out of him, I might consider making an exception.

The headline this morning was something to the effect “Conservative destroys Mayer with facts, audience applauds”–linked at Yahoo!

Watching the segment, you wouldn’t know who was conservative and who was liberal.

I see the headline has been changed since.

The Daily Caller went full Alinsky in how they framed the discussion.

Jane Harman suggests the Palestinian people have made bad choices of leaders. But have they really? What choices did they have in selecting and supporting candidates, both of the PLO and of Hamas? Did wads of UN and US and European dough wind up under the control of candidate A and not candidate B? Were they voting secret ballots, or were they ‘supervised’? And why is Abbas in the eighth year of his 4-year term?

Maher actually interviewed Netanyahu on his show in 2006.