Culture of retaliation and denial. 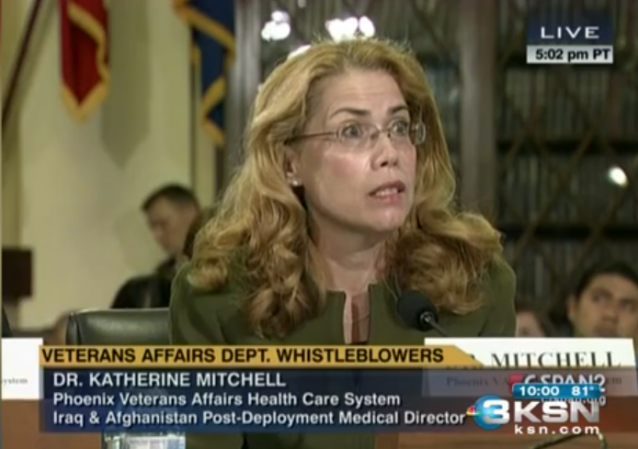 At a House hearing last night, several Veterans Administration whistleblowers revealed the disfunctionality of the agency, and the retaliation they suffered when they raised concerns.

Those are just some of the forms of retaliation described by four whistleblowers from four different regional VA systems, who testified Tuesday night before the House Veterans Affairs Committee….

Dr. Katherine Mitchell, who served as the Medical Director of the Iraq and Afghanistan Post-Deployment Center in the Phoenix VA Health Care System, testified on Tuesday that as head of the emergency department, she saw many serious errors due to understaffing, but that her concerns went unaddressed. ”It is a bitter irony to me that I as a physician could not guarantee [patients’] safety in the middle of cosmopolitan Phoenix,” she said. Mitchell said she was placed on involuntary administrative leave and investigated for including some patient information in confidential Inspector General complaints.

Another witness, Dr. Christian Head who worked at the Los Angeles VA, spoke of attending a holiday party after testifying in a fraud case and seeing a Powerpoint slide mocking him, a photo of him giving the camera a middle finger with a VA IG phone number included. “I was labeled a rat,” he said, nearly choking up.

Scott Davis, a worker at the Atlanta Health Eligibility Center, which processes applications to join the VA health system, also described facing harassment after contacting Deputy White House Chief of Staff Rob Nabors, who completed a comprehensive review of VA policies in June. Davis insisted that there be greater accountability for managers who have the power to punish employees who report possible wrongdoing.

AP further reports on the growing number of whistleblower complaints:

Their testimony came as a federal investigative agency said it was examining 67 claims of retaliation by supervisors at the department against employees who filed whistleblower complaints — including 25 complaints filed since June 1 — after a growing health care scandal involving long patient waits and falsified records became public.

The independent Office of Special Counsel said 30 of the complaints about retaliation have passed the initial review stage and were being further investigated for corrective action and possible discipline against VA supervisors and other executives. The complaints were filed in 28 states at 45 facilities, Special Counsel Carolyn Lerner said.

You can watch the entire hearing recorded at C-SPAN.

Those Obama-ite Administrators who caused this death of the men who defended our country deserve death be firing-squad.

This is why our Framers wanted small, decentralized government. Its a goddamned hospital and evil is rampant there. small, stupid, petty men profiting on the blood of patriots and mocking(!) those who care for them.

RE: “….small, stupid, petty men profiting on the blood of patriots and mocking(!) those who care for them.”

BAD PEOPLE do bad things, this has always been the case. Just because they might be an educated ‘professional’ doesn’t determine their character as a human being. Any law passed, any regulation manufactured, will not solve the problem. Crap, even in sharia compliant countries, thieves are still getting their hand cut off — after 1400 years of enforcement.

How do you make a law concerning someone’s character?

If you’re in an institution where doing good gets you punished, then even good people will do bad things.

People need to go to jail for this. And yet, in Obama’s administration, nobody has even been fired for it.

“Lotsa people should go to jail”: Jonah Goldberg on the VA scandalssss.

Again, you cannot “fix” the VA…or any BIG GOVERNMENT agency. They are systemic failures on multiple levels, and they HAVE to be by their very nature.

Congress/amendments must remove all executive branches except for the POTUS branch. The ancillary branches contain unelected people who do not represent “We the people.”

The tree of liberty will survive if the Executive branches are cut off. No more monarchy for King Popinjay Obama.

These branches have become fiefdoms of power. These fiefdoms follow the Obama rule of lawlessness. No more.

Obama’s not really to blame here, although he hasn’t done anything to fix a longstanding problem, either. My own experience trying to use my veterans’ education benefits (circa 1980) was completely frustrating: the VA asked for the wrong paperwork and then, after it was supplied, didn’t tell me it was wrong. Result, beginning of the semester, no money and the VA shrugging its shoulders because *I* hadn’t applied properly.

Not a health benefit, but the same disregard for getting the job done.

What a fucking joke. They’re going to get a slap on the wrist and go about business as usual.

Everybody involved with the coverup needs to be FIRED. And possibly prosecuted for criminal negligence.

Now think about what retaliation probably looks like for IRS employees…. “Nice family and friends you have – it would be ashamed to have them all audited, annually.”

Government agencies cannot be reformed. The only way to stop their abuses is to close them down. Milton Friedman explained why, using a memorable metaphor that should be constantly repeated by every blogger in our era, in a column published in Newsweek on February, 19, 1973, p. 70. The offending agency under discussion then was the FDA, Friedman arguing that “approval of drugs by the Food and Drug Administration delays and prevents the introduction of useful as well as harmful drugs.”

Here is Milton Friedman’s column, as reprinted within a post by Necessary and Proper Gov’t (N&P) at the following link:
http://tinyurl.com/nuob27h

“In a recent column I pointed out that approval of drugs by the FDA delays and prevents the introduction of useful as well as harmful drugs. … I summarized a fascinating study by Prof. Sam Peltzman of UCLA of experience before and after 1962, when standards were stiffened. His study decisively confirmed the expectation that the bad effects would much outweigh the good.

The column evoked letters from a number of persons in pharmaceutical work offering tales of woe to confirm my allegation that the FDA was indeed “Frustrating Drug Advancement….” But most also said something like, “In contrast to your opinion, I do not believe that the FDA should be abolished, but I do believe that its power should be” changed in such and such a way — to quote from a typical letter.

I replied as follows: “What would you think of someone who said, ‘I would like to have a cat, provided it barked’? Yet your statement that you favor an FDA, provided it behaves as you believe desirable is precisely equivalent. The biological laws that specify the characteristics of cats are no more rigid than the political laws that specify the behavior of governmental agencies once they are established. The way the FDA now behaves, and the adverse consequences, are not an accident, not a result of some easily corrected human mistake, but a consequence of its constitution in precisely the same way that a meow is related to the constitution of a cat. As a natural scientist, you recognize that you cannot assign characteristics at will to chemical and biological entities, cannot demand that cats bark or water burn. Why do you suppose that the situation is different in the social sciences?”

The error of supposing that the behavior of social organisms can be shaped at will is widespread. It is the fundamental error of most so-called reformers. It explains why they so often believe that the fault lies in the man, not the “system,” that the way to solve problems is to “throw the rascals out” and put well-meaning people in charge. It explains why their reforms, when ostensibly achieved, so often go astray.

The harm done by the FDA does not result from defects in the men in charge — unless it be a defect to be human. Most are and have been able, devoted and public-spirited civil servants. What reformers so often fail to recognize is that social, political and economic pressures determine the behavior of the men supposedly in charge of a governmental agency to a far greater extent than they determine its behavior. No doubt there are exceptions, but they are exceedingly rare — about as rare as barking cats.”

There is a whole lot of people at the VA, at a minimum, should lose their jobs and some of them should be prosecuted criminally. I used the VA a couple of years ago and it’s a 4 hour drive one way to Phoenix from where I live. I waited for 8 months for an appointment, however, once I did get one it took less than 45 minutes at the VA to see the doctor and be on my way. Biggest waste of a day I ever had.
Special Counsel Carolyn Lerner couldn’t be related to Lois by chance?

Boehner is on it, don’t you worry….