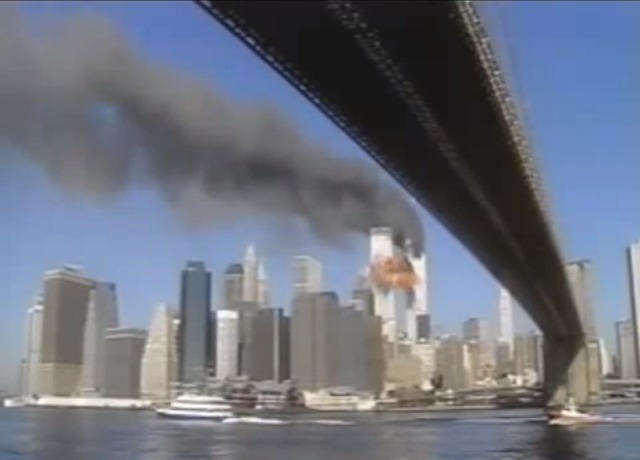 Good morning from the 10th anniversary of the 9/11 Commission. #bpclive pic.twitter.com/GFMg0V3eWd

The panel members warn that though al-Qaeda has been severely weakened since 2001, new and offshoot groups — like ISIS (Islamic State of Iraq and Syria) continue to pose serious threats to the United States national security.

The authors also describe the threat of a cyberattack as a significant concern, likening it to the threat of terrorism before the Sept. 11, 2001, attacks. They describe the “cyber domain as the battlefield of the future” and say the country needs to take further steps to prevent the cyber equivalent of 9/11.

“We must not repeat that mistake in the cyber realm,” wrote the authors, including Thomas H. Kean and Lee H. Hamilton, who together chaired the 9/11 Commission.

The new report is critical of Congress and urges lawmakers to make “structural changes in oversight and appropriations for homeland security and intelligence.”

The former commission members note that in 2004 the Department of Homeland Security, which was created after 9/11, answered to 88 committees and subcommittees of Congress. Today, that number has increased to 92.

Kean also told The Wall St. Journal that he is very alarmed about the threat level to the United States.

“The sense of alarm surprised me,” said Tom Kean, the former Republican New Jersey governor who headed the Sept. 11 commission. “I have not heard this much concern since 9/11.”

The emerging threat from the extremist group calling itself the Islamic State—now competing with al Qaeda—also raises questions about the adequacy of legal authorities for the U.S. to respond to new threats not directly related to al Qaeda.

Congress and the president need to decide whether the 2001 act called the Authorization to Use Military Force provides adequate authority to take on the group, or if new powers are needed, the report says.

From the new report itself:

A senior national security official told us that the forces of Islamist extremism in the Middle East are stronger than in the last decade. Partly, this is a consequence of the Arab Spring and the power vacuums and ungoverned spaces that have sprung up in its wake. Partly, it is the result of America’s inability or reluctance to exert power and influence in a number of places. Officials are also deeply concerned at the region’s seemingly endless supply of disaffected young people vulnerable to being recruited as suicide bombers. We explained in our report that the “United States finds itself caught up in a clash within a civilization,” which “arises from particular conditions in the Muslim world.” This clash has only intensified since then.

In short, the terrorist threat is evolving, not defeated. While al Qaeda’s various affiliates are enmeshed in their own local conflicts, hatred of the United States remains a common thread. While some of these groups are not currently fixated on or capable of striking the U.S. homeland, they may seek to attack outposts of the U.S. presence overseas, including diplomatic posts, military bases, or softer targets such as American businesses in foreign countries.

In addition to Congressional dysfunction, the report blames public apathy and complacency for the lack of attention to oversees terror threats.

Threaded throughout the report is the commissioners’ warning that the American public’s understanding and concern about threats from terrorist groups and cyberattacks lags far behind those of security professionals.

“The terrorist threat has evolved, but it is still very real and very dangerous,” the report concludes. “Complacency is setting in. There is a danger that this waning sense of urgency will divert attention and needed resources from counterterrorism efforts.”

The full report: “Reflections on the Tenth Anniversary of The 9/11 Commission Report” can be read here.

The original 9/11 Commission Report was released on July 22, 2004 and can be read in its entirety at this link.

Thank you for this post, and for linking BOTH the new report and the underlying original.

I believe the complacency of the American public is founded on the story told during the last Presidential election by the Democratic Party: the slogan “Bin Laden is dead and General Motors is alive” was designed to invoke that result.

It’s all the more disgusting when you realize that Barry and Hillary left people to die in order to protect the lie.

The magic thinking of the Collective has made the entire world MUCH less safe than when Pres. ScamWOW came to power.

Really bad people have noticed that Baracula does not deal with reality, and has surrounded himself with like-minded, un-serious people.

This IS hurting and WILL hurt of a lot of people. Some now. Some very soon. Some years from now.

Remember, shhhhhhhhhhhh. Don’t let the public in on it. If they ever learn that Islam is the common denominator in all these groups, from Al-Qaeda and those which you call off-shoots, including Hamas, Fatah, Hezbollah, among others such as Boko Haram, they might get upset and think that their government has been lying to them about Islam’s very unpeaceful objectives.

There are many who are not complacent, who recognize that the Islamic Supremacists are still a huge threat. Groups such as ISIS want to establish a worldwide Caliphate, leaving all infidels – i.e. everyone not a Muslim – with the choice of death or dhimmitude. Since I would not be disposed to pay the jizyah death would be my lot … but would take a Sultan’s Honor Guard of Supremacists with me.

As Valerie noted, it is no surprise that so many people aren’t concerned about this; they have been subtly told not to be. Obama has forbidden the use of the words “jihad”, “Islamist”, and “terrorist” – among others – in any government correspondence, reports, or any other official utterance. And we wonder why there is so much apathy.

And, Germany shows its disgust for Obama’s spying.