US Economy Tanks In First Quarter

US Economy Tanks In First Quarter 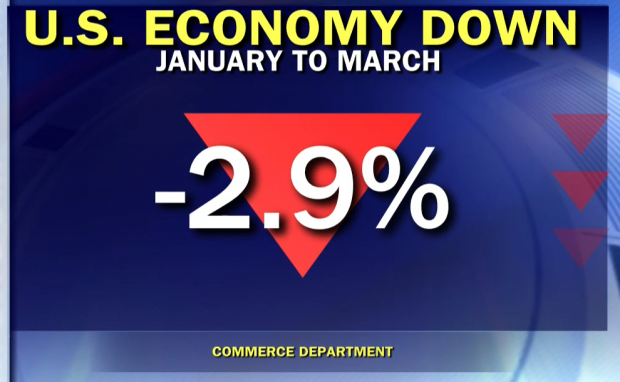 Despite the multiple “Summers of Recoveries” touted by President Obama and Vice-President Biden — it seems the U.S. economy is, at best, in a stall.

Gross domestic product — the broadest measure of economic growth — contracted at a 2.9% annual rate in January through March, according to the latest revision from the Bureau of Economic Analysis. That’s the weakest quarter for the U.S. economy since the Great Recession.

Naturally, The White House and its apologists blamed away the dramatic drop in GDP to nasty winter weather.

“The larger contraction in GDP in the first quarter is not a sign that the U.S. is suffering from a fundamental slowdown — it was still largely due to the extreme weather,” said Paul Dales, senior U.S. economist with Capital Economics. 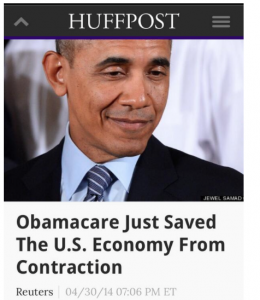 I look at this + the shrinking workforce + decrease in incomes + increase in health ins cost due to Obama care and I compare against the curve of the nasdaq and DJIA.

The market is poised for a huge ass correction.

To me the market is way more out of whack now than it was at the end of 2008 when the housing bubble popped.

I remember back in the day if you argued that the Bush tax cuts kept the economy from being worse than it was, Dems would just laugh, “yeh, right.”

Virtually everything I can think of that spins up uncertainty in the business world has been slathered on our economic picture by Pres. ScamWOW.

Last time I looked, capital formation in the U.S. was at record lows, and money was taking flight to more rational climes.

Private capital formation is still well below 2007 levels, and that indeed means there can be no real recovery. Corporate profits and capital are up, but only because so much money usually in the bond market has been put into equities in search of some return, a byproduct of the insanely artificial low interest rates combined with high spending and public debt.

Publicly traded companies aren’t investing their cash in expansion; they are either sitting on it or using it to repurchase outstanding shares (which helps boost the price – and earnings per share go up because there are fewer shares out).

Taxes and regulation have us in a cycle of limits to growth. The problem, in short, is Obama.

How can capital be formed when real savings rates are negative?

Funny how the economy refuses to go along with the regime’s propaganda, innit?

Cutting through all the spin and propaganda – a -2.9% annual growth rate is a disastrous number for a major economy. Not yet in depression territory, but definitely getting there.

This is nothing surprising to anyone who is living outside the Beltway.

The Obama Economy is a guarantee of inevitable collapse, if not corrected. With nostalgia, I remember Paul Ryan predicting that the economy would collapse if the debt and deficit weren’t addressed. Good times.

The rumor of economic growth is greatly exaggerated. And we the people living it know it. Too bad the DC elites don’t care.

(OT – someone forgot to turn off the ITALICS tag; the entire blog post section is now being “emphasized”.)

just take a life lesson from Chelsea Clinton. You can’t be “concerned about money”.

Obama built this, from the contraction “You didn’t build this” on down.

this is obviously all Bush’s fault.

including the italics, of course.

1Q 2014 the corrected GDP shrank by 1% (after initially being told it GREW by 1%) and 2Q2014 shrank by 2.9%. that my friends is the official technical definition of a recession. and if you look at the economy for the last 6 years we meet every technical definition of a depression. The ONLY reason the stock market looks rosy is the Fed Pumping. if that ever stops, the TRUE market situation will become apparent. And it won’t be pretty.

UPDATE 4, 12:30 p.m.: Note well that the reported reduction in health care spending in today’s GDP report is about 0.4%. That COULD indicate that the BEA still hasn’t captured the full extent of the health care spending reduction, which could lead to a further downward revision in next month’s comprehensive 5-year restatement.
—via Ed Driscoll

That’s after trillion dollar infusions, not including redistributive change (i.e. private capital capture) schemes like Obamacare. I wonder what the state of the real economy is.

And the prog drones will mindlessly point at the equities market and tell you the Soetero economy is great.

We have three more years before a POSSIBLE cure can even begin. But with the illegal vote and the dumbed-down electorate, it’s likely we’ll get obamullah 2.0, ie., Hitlery. The outlookforf any recovery, ever, is bleak.

It’s time to ‘go to the matts’. Stuff your money in your mattress before obamullah and his gang of cutthroats wipes you out, hose it down with fire retardant, and use it as cover when the shooting starts.

The feds have total control of this economy now.

And obamullah just appointed that vicious, vile harridan, Leslie Caldwell, who prosecuted Arthur Andersen Group (overturned but too late for them) and makes Angela Corey look like a model of judiciousness, to run the criminal division for DOJ. She’ll finish off major financial businesses and banking in this country.

I wouldn’t recommend sitting (or sleeping) on too much cash for too long…. we’re ripe for a major bout of inflation before long.

Forgive me but you could not be more wrong. Some lucky punk banks will be thrown to the sharks (such as Bear Stearns) but most will be immunized. That will be strengthened by contrasting them with this witch (she’s a headhunter so if they still have their heads they’re clean).

Who does the jugeared jackass hang out with? Middle class weekend lawn mowing 9-5ers? Or filthy rich cronies with lib credentials and huge rolodexes.

Your time is up. Choose one of the above, and then figure out who will be protected no matter what.

Some leftist commentators are claiming housing is coming up and points to a robust 2nd Quarter.

But durable goods orders don’t go down when housing is healthy. They just don’t. There are new orders for plumbing hardware and appliances for new houses.

The MiMi housing market index is still at -3.01. The normal range is from -2.00 to +2.00. Anything outside that range indicates a rising or falling market. Numbers don’t lie.

ObamaCare has effectively doubled or tripled the cost of health insurance in this country. Obama regulations are a work killing industries and jobs. Tyrant Obama the Liar’s actions threaten to cause a civil war. It’s a wonder that they economy isn’t collapsing completely.