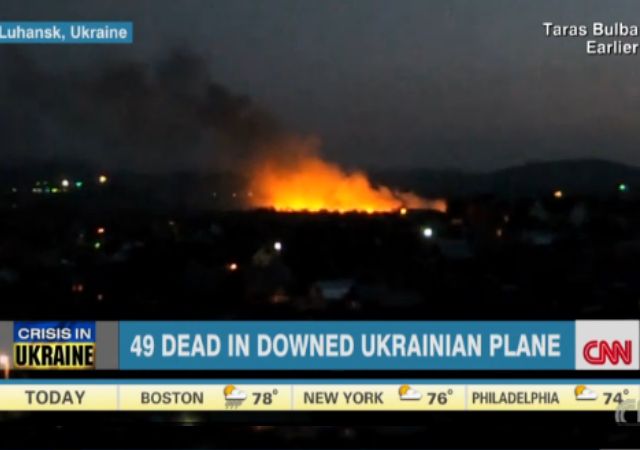 A Ukrainian military transport plane was shot down by separatists in eastern Ukraine Saturday, killing 49 service members in what has been reported as the highest death toll suffered by government forces in a single incident since the unrest began there months ago.

Pro-Russian separatists shot down an army transport plane in east Ukraine on Saturday, killing 49 servicemen and dealing a blow to a military campaign to defeat the rebels and hold the country together.

President Petro Poroshenko promised an “adequate” response after the plane was hit by an anti-aircraft missile as it came in to land at the airport outside the city of Luhansk, a centre of the rebellion against central rule that began in April.

“All those involved in cynical acts of terrorism of this magnitude must be punished,” he said, declaring Sunday a day of mourning for the nine crew and 40 paratroopers killed.

He later consulted with his security and defense chiefs but gave no details of how they would retaliate.

A statement from the Ministry of Defense indicated the plane had been carrying machinery, equipment and food.  Nine crew members and 40 paratroopers aboard the plane were killed, according to the military wing of the prosecutor general’s office, the NY Times reported.

Ukraine’s military had in recent days stepped up efforts to reclaim control of parts of eastern Ukraine from pro-Russia rebel forces.  On Friday, Ukrainian troops drove rebels out of the southeastern port city of Mariupol after heavy fighting.

The news of Saturday’s incident regarding the downing of the military plane comes after the U.S. State Department on Friday accused Russia of sending tanks and weapons to separatists in Ukraine.

The State Department said Friday that Russia had sent tanks and other heavy weapons to separatists in Ukraine, supporting accusations Thursday by the Ukrainian government.

A convoy of three T-64 tanks, several BM-21 multiple rocket launchers and other military vehicles crossed the border near the Ukrainian town of Snizhne, State Department officials said. The Ukrainian Army reported Friday that it had destroyed two of the tanks and several other vehicles in the convoy.

“This is unacceptable,” said Marie Harf, the deputy State Department spokeswoman. “A failure by Russia to de-escalate this situation will lead to additional costs.”

A spokeswoman for the National Security Council condemned Saturday’s attack and echoed the State Department’s earlier urging for Russia to pursue de-escalation, according to CNN.

A U.S. National Security Council spokeswoman Saturday condemned that attack, saying officials were “deeply concerned about the situation in eastern Ukraine, including by the fact that militant and separatist groups have received heavy weapons from Russia, including tanks, which is a significant escalation.”

“Regarding sanctions, we have said that we want to give Russia the opportunity to pursue de-escalation,” NSC spokeswoman Laura Lucas Magnuson said in the statement. “President Obama made clear that de-escalation depends upon Russia ceasing support for separatists in eastern Ukraine and stopping the provision of arms and materiel across the border, and we urge Russia to do so.”

Will Obama read about this in the newspaper tomorrow?

Obviously this was caused by a video.

This, mind you, is just a couple of tanks, but what I don’t understand, is how come they didn’t have the tanks before. An Ukrainian armored column surrendered a while ago, and they once repaired an old T34 that was standing there on the podium and drove it around for a few hours — I suppose that’s all it was good for.
Another interesting thing is that the Russians claim that Ukrainian army made an incursion into Russia. See here:
http://news-for.me/2014/06/13/t-dva-ukrainskih-bmp-peresekli-granitsu-s-rossiej-video/
And Ukrainians say that the separatists made an incursion into Kharkov region, the town of Izyum, where Ukrainian top brass is headquartered:
http://society.lb.ua/accidents/2014/06/14/269753_harkovskuyu_oblast_pitalis.html
It really is awful in Lugansk and Donetsk with separatists (and God knows who else those groups are) using civilians as human shields and Ukrainian army shelling population centers. Accordiang to Russians, something like half of Slavyansk is evacuated to Russia and Poroshenko is talking about opening a humanitarian corridor (with “filtration camps”) to let refugees through. Can it get worse?

An unpopular coup has consequences.