U.S. deserts Israel on Hamas while all eyes on return of alleged U.S. deserter

U.S. deserts Israel on Hamas while all eyes on return of alleged U.S. deserter

The Audacity of Hapless 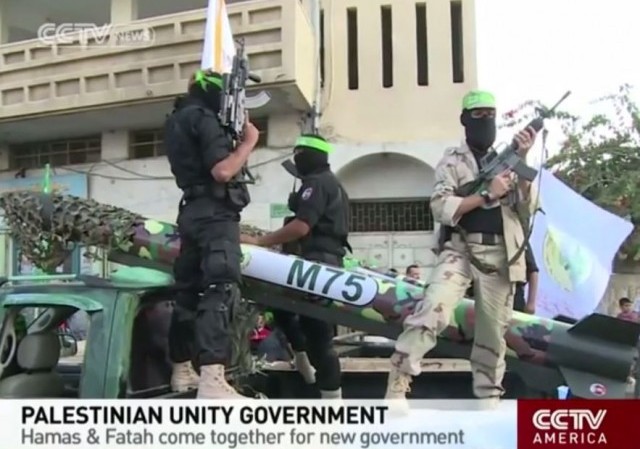 And so it continues.

All eyes have been focused on the increasingly bizarre facts of the exchange of 5 top Taliban Gitmo detainees for Bowe Bergdahl, someone who may very well be a deserter if reports by soldiers who served with him are accurate.

Yet an even bigger event took place just yesterday, as the State Department announced the U.S. was embracing the new Palestinian Authiority coalition government which for the first time includes Hamas, a recognized terrorist group which remains sworn to the destruction of Israel.  Reuters reports, U.S. says to work with, fund Palestinian unity government:

The United States said on Monday it plans to work with and fund the new Palestinian unity government formed after an agreement by the Fatah and Hamas factions, and Israel immediately voiced its disappointment with the U.S. decision.

he United States views Hamas as a “terrorist” organization and the U.S. Congress has imposed restrictions on U.S. funding for the Palestinian Authority, which typically runs at $500 million a year, in the event of a unity government.

Senior U.S. lawmakers said on Monday Washington should suspend aid to the new unity government until it is sure of the Islamist group’s commitment to pursuing peace with Israel.

In its first comment since the Palestinian government was sworn in, however, the State Department stressed that it regarded the new Cabinet as made up of technocrats and that it was willing to do business with it.

Following the U.S. lead, the EU and U.N. quickly announced acceptance of the coalition.

We now have open conflict between the U.S. and Israel based on the U.S. backing out of understandings with regard to Israeli refusal to negotiate with the PA if Hamas were part of the coalition.

Prime Minister Benjamin Netanyahu said Tuesday he is “deeply troubled” by the US decision to maintain relations with the new Palestinian unity government, urging Washington to tell the Palestinian president that his alliance with the Hamas militant group is unacceptable.

Netanyahu has urged the world to shun the government because it is backed by Hamas, an Islamic group that has killed hundreds of Israelis in attacks over the past two decades. But late Tuesday, both the US and European Union said they would give Abbas a chance.

In recognizing the fig leaf of a “technocratic” government that is meant to distract the world from the reality that Hamas is now in full partnership with Abbas, the Obama administration may think it has put Israel’s government—which publicly called for the world not to recognize the Palestinian coalition—into a corner. But by discarding its own principles about recognizing unrepentant terror groups, Obama has done more than betrayed Israel. He has betrayed the cause of peace.

It’s hard even to begin to describe the destructiveness of Obama’s foreign policy.

Obama is out of control. Something has changed over the last couple weeks. It is frightening to wonder what he is up to, what his game plan is, or even that he has no particular plan beyond opposing Israel.

I agree. It’s almost like his first year in office, when he committed Presidential atrocities so fast and furious no one could keep up, and faded away in the dustbin of Google.

Has Hamas repudiated its founding document?

This is a contract to murder, and teach others to murder. It is the primary barrier to peace in the Middle East, and increasingly in other parts of the world, as well. This document must be repudiated.

Now would be an appropriate time for the gutless LA Times to publish a story about the heretofore secret Rashid Khalidi tape. What I have begun to believe is that we elected not only the first black President, but the first Muslim one as well.

“Sources who had debriefed two former members of Bergdahl’s unit told Fox News Bergdahl left behind a note the night he left base in which he expressed disillusionment with the Army and being an American and suggested that he wanted to renounce his American citizenship and go find the Taliban.”

That is from Fox.

Heard this song before. An old classic.

I was wondering why Abbas was suddenly able to get all the pieces together for a “unity” government, since Fatah and Hamas hate each other like two different Mafia clans.

Now I know. It’s all about the Benjamins.

The news gets worse and worse, so depressing.
I played this youtube clip multiple times today. I just wanted to cheer myself up that the US does in fact have an elected leader who can speak logically and insightfully about Israel and the national interest of the US.
http://www.youtube.com/watch?v=_PO7p2aPRv4

Obama must be amazed that his well stated plan to radically transform the USA is coming together so very well. Of course, we need to recall that children’s campaign song, for Obama, from 2008, that Obama would change the US and then rearrange the US, that he’s going to change the world. He’s trying very hard now to achieve his goals.

What’s next, Sharia Law upheld within the USA? Or, his opening the Southern Border to all? Or, issuing another edict on more federal regulations?

Obama would have had the 5 “freedom fighters” at the Rose Garden, complete with al Qaida flag flying if he thought he could get away with it.

…people in power tend to get what they want….

According to Islamic doctrine, if your father was Muslim, you are Muslim, regardless of your professed beliefs. Even though we know that every time B. Hussein Obama opens his mouth he is speaking a “falsehood” as it is understood in western culture, the Muslim concept of taqiya now takes on much more relevance.

My brother summed it up best, “I hate this President”.

I’m afraid our President has reached his sell-by date. Evidence of his dis-ingenuousness is irrefutable. He can not be relied upon to follow either the law as clearly written or to honor the commitments he has made. He has not shown evidence of defending the interests of the United States. Those surrounding him have been chosen for their inability to effectively moderate his decisions. This is a failed administration. Our goal should be regime change.