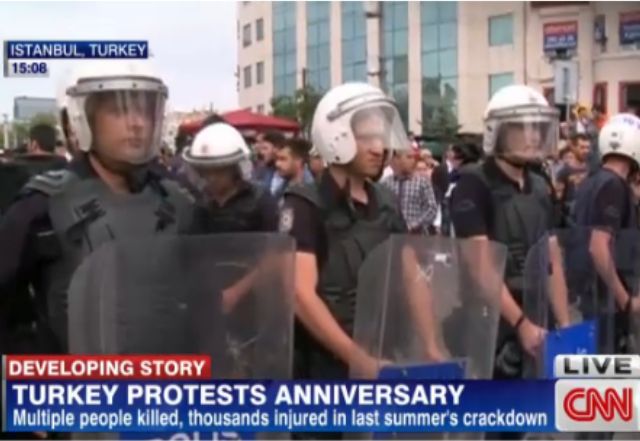 Saturday marked the one year anniversary of the Gezi Park protests that subsequently persisted for months in Turkey last year.  As many tried to gather to commemorate that anniversary, authorities responded on Saturday by blocking access to some locations and cracking down on some of the protesters.

Turkish police fired teargas and water cannon on Saturday to disperse protesters in central Istanbul who sought to mark the one-year anniversary of the country’s biggest anti-government demonstrations in decades.

Police lines kept back activists who had hoped to read a statement at Taksim Square and lay flowers at the park to commemorate the deaths of at least six people in the protests against Prime Minister Tayyip Erdogan’s rule.

Another half-dozen people died in sporadic unrest in the ensuing months as anger at Erdogan and his AK Party simmered.

Turkish plainclothes police also harassed a CNN reporter Saturday as he was in the midst of a live broadcast.

International correspondent Ivan Watson had just finished explaining that police had closed off central Istanbul to prevent demonstrators from being able to lay flowers at the sight of last year’s protests when he himself was manhandled by officers.

Viewers of CNN International on Saturday morning watched as officers demanded to see Watson’s press credentials and passport, as well as those of his crew.

The camera kept rolling as the officers grabbed Watson and started walking with him. One officer kneed him in the back. They also broke the microphone off CNN’s camera while wrestling it out of the hands of the cameraman.

Officers demanded to see Watson’s press credentials, but pressed even further and demanded he produce his passport, something that CNN indicated was unusual.  Watson was not arrested and was released about a half hour later, with apologies from police for the inconvenience, according to CNN.

Protests in Turkey erupted last year after what started out as a peaceful demonstration over the proposed park demolition morphed into a broader anti-government movement as the government cracked down on demonstrations and on many social media users.