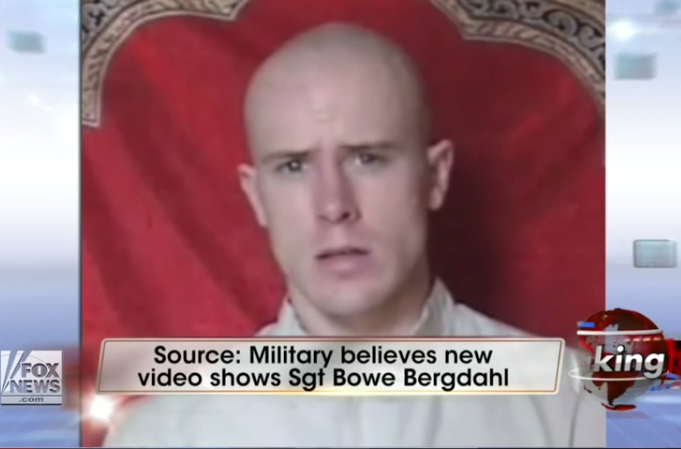 This is what happens when a Center for American Progess Vice President guest blogs at CAP’s captive media organ, Think Progess.

Did Sergeant Bergdahl Desert The Army Or Did The Army Desert Him? (emphasis added):

“Deserter” might be the appropriate label for SGT Bowe Bergdahl, America’s only prisoner of war until he was released last week in a controversial swap for five Taliban detainees. It is an ugly word, ripe and sticky with betrayal. It means a soldier sworn to defend his nation has left his post without permission, and with no plan to return. He has abandoned his comrades. It is worse than away with out leave, for AWOL soldiers come back and face the appropriate disciplinary action. It leaves you short, just short, of being a traitor.

But it is just as likely that Bergdahl was the one deserted by an Army that could not keep up with the mental health needs of deployed force. 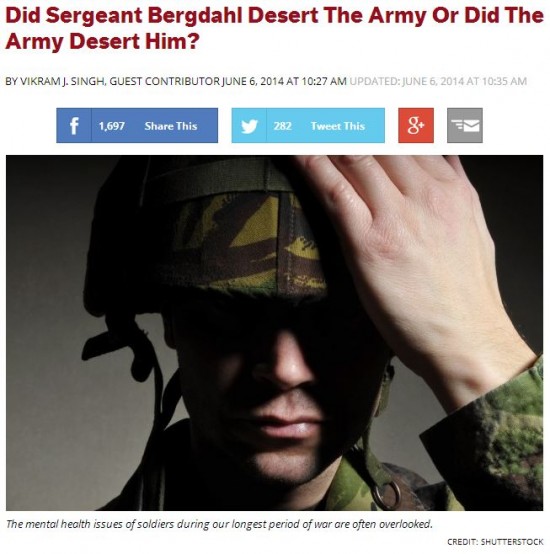 Progressives have no shame, and no brain. I’m almost speechless.

NY Times is on the story, too!
Turns out the problem is due to the Army not securing the camp, thus enabling Bergdahl to desert.
I kid you not.
http://twitchy.com/2014/06/06/so-angry-i-could-spit-nyt-editorial-board-sinks-to-new-low-over-bergdahl-mess/

Maybe they don’t understand that unlike a prison, in Afghanistan, the bad people are assumed to be outside the perimeter, not inside…?

I still remember the night of 9/11 when WBAI-FM blamed the building.

Thunk Progressives would, I suppose, court-martial the Army.

What a collection of morons.

You win “comment of the day” in my opinion! 🙂

I had to log in just to up-arrow this one.

and the standard MSM lingo now accepts “prisoner of war” as the correct term. When did the terrorists start abiding by the Geneva convention? Last I recall they were still targeting civilians and not wearing uniforms.

Oh, man. I was telling a friend at work the other day that, if all else failed and the evidence was irrefutable he was a deserter/traitor, that the left would use the insanity defense. That they would blame his superior officers for not putting him in mental health treatment.

I’ve seen blog comments suggesting that leaving his unit was actually an enlightened act — he discovered that being a soldier involved killing & stuff, and that was something his lofty conscience could not bear. Which is pretty much how Abdullah and his did explain it all (except they add service to Allah).

As Brandon Friedman is my witness, didn’t we as a country desert his whole psychopathic platoon?

Is Think Progress implying that converting to Islam is a symptom of mental illness?

This is just another example of the mental gymnastics liberals put themselves through.

Every time there is a mass killer, attack, or something, they have to blame something – ANYTHING – that they can control.

ANYTHING so they don’t have to admit that sometimes there are bad people in the world and they make terrible decisions.

It’s an ambiguous testimony to Progressive Consternation caused by desperation, which belies the available physical and witness evidence.

I hoje Thaís everyone here knows that Centre for American Progres is one of George Soros’ tentacles.

Just so – and so is Think Progress.

So it isn’t really a “guest post” – they all serve the same master, leftist currency manipulator and alleged money launderer Soros.

Please excuse the “auto-correction” typos because I didn’t chance languages.
Should be, ” I hope that” .

As I’ve been saying for years, all leftists are anti-American totalitarians at heart. There is no debate or discussion to be had with them.

I didn’t realize believing oneself to be a precious little snowflake had become a diagnostic category. Pray tell, what is the recommended treatment? I almost feel sorry for the Taliban who had to put up with Bergdahl for five years.

I believe the recommended cure for desertion/defection during time of war would put an end to what ever ails him.

It is really going to [email protected]@@@ me off to hear that piece of scum being referred as a POW. Abdullah was not a POW. He was a deserter and was held, not by the Taliban but by the Haqquini network.

I think I now know the game of George Soros. He is [email protected]@@@d that his side lost in the 2nd world war.

Dang it I keep reading about these scary “Republican Operatives” and dang it I can never seem to find where to apply to become one. I can’t even find out the pay scale. It’s very frustrating.