“We know those emails are out there, we know they can be found.” 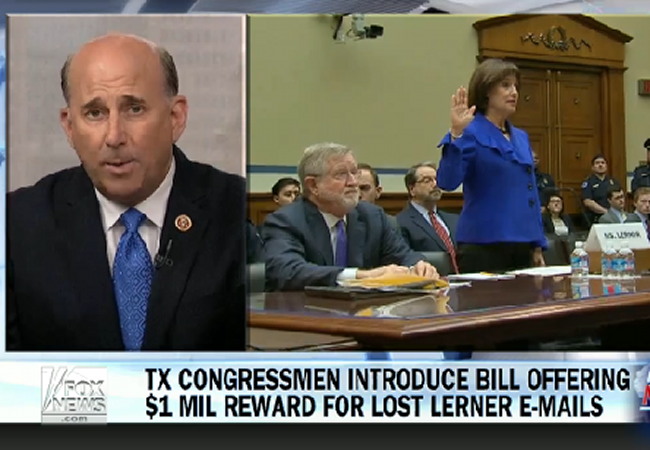 Rep. Louie Gohmert is introducing the pricey bounty in the form of a bill on Capitol Hill, blasting Attorney General Eric Holder and the Department of Justice for failing to get the job done.

The Texas congressman appeared on “America’s Newsroom” Friday to explain why he thinks his bill can get the answers Republicans are looking for.

“We know those emails are out there, we know they can be found,” he said. “We just need the people to help find them.”

“This is a way to work around the attorney general to achieve justice,” he continued, accusing Holder of helping hide the truth and calling for his resignation.

If you watch the entire video, you can see a funny segment on photo-bombing at the end.

Getting the bill through the Senate and White House might be a chore, though. How about just raising the money from donors? And jack it up, a million really isn’t that much these days, especially since the IRS will have first dibs.

Good thinking. The bounty could be offered by a tax-exempt outfit, too, since the goal here is “social” and not political.

Narrow the conditions and raise the bounty for a real “smoking gun” email.

Or broaden the conditions and lower the bounty for individual emails.

Why don’t we do it in kickstarter.com or indigogo…? Can these website be used for this purposes…?

Seems to me they could, but there are others, too.

I know this has already been said MANY times (many ways): Give me a week of non-restricted access to all IRS systems and 10 talented & experienced, and volunteer, I-T professionals, and we’ll get everything that’s needed.

If someone wants to reward us with an extra $1 million on top of our highly-satisfying achievement, that would be fabulous, too.

(Perhaps want to include an extra 10 lawyers and CPAs to help us through those completely random IRS colonoscopy audits.)

Oh, I’m quite certain the IRS I-T staff could do the same thing, but that’s not what the IRS wants.

There is an outfit to which I belong…the Association Of Certified Fraud Examiners (I’ve never sought the certification because I HATE accounting). Certification is rigorous.

One of the “badges of fraud”…things that trial lawyers point juries to in fraud cases…is what I call “holes in the sky”. That is how you spot aircraft on a starry night.

When you look for something that we all know is SUPPOSED to be there, and it isn’t, that can be enough to prove fraud by inference.

This is a disaster; a white flag; not even a “Hail Mary” pass. I’d almost rather hear a physician refer me to a faith healer. It makes “will no one rid me of this meddlesome priest” seem like an effective plan.

Our chief legislative body – the one which is supposed to represent the interests of 300 million Americans – just admitted that the law is incapable of controlling the government. This is not a technical problem about backups, it’s a legal problem about perversion of state apparatus to permit depredations by the Democratic crime syndicate. And that syndicate has just been publicly informed that it can get away with it.

Tell the Weimar Republic to move over, the USA is going to need some space in wherever-it-is that nations go when they die.

“…the law is incapable of controlling the government.”

This is not a revelation. This has been known since ancient Grecian times.

The law, as I have observed here many times, is a clumsy hammer. It is by no means an adequate tool for informing the behavior of people. That requires a code of ethics, organic to the individual. If the only constraint on conduct is fear of the law, for an outlaw there are no constraints.

Put another way: I am very good with tools. If I wanted something enough to steal it, no effort to secure it from me would deter me. Nor would my fear of being prosecuted for taking it under criminal law be of any but passing concern for me. I can defeat that possibility. But there is nothing anyone has that would make me violate my own values, and that is what constrains me.

This is not a revelation. This has been known since ancient Grecian times.

Of course. The Constitution was structured with this danger in mind. As the Dead White Guys knew perfectly well, republican (or even partially republican) governments of earlier historical eras, from the Peloponnesian War to England’s trouble with the Stuart kings, had a history of failure, and they incorporated mechanisms to decrease the probability of similar failure into their new attempt. Separation of powers was one such mechanism. Tyranny and criminal behavior in one branch could not pervert the entire government; with the rest of the government still functioning, corrective action would be possible. Excepting some notable failures, such as FDR’s Executive Order 9066, establishing concentration camps in America – a crime later approved by the Supreme Court – the system has worked tolerably well. It seems that those days are over, at least so far as Congress is concerned.

Your history is too truncated.

Jackson was pretty tyrannical when it suited him.

The Progressives…all of them…were too. Wilson was the worst, but only the worst. Some of his stuff makes FDR look like a civil libertarian.

Even Lincoln was awful when the “worser” angels of his nature were in ascendency.

Tom Swift has a point: the House really is demonstrating that it can’t exercise its responsibilities.

1) put forward a motion to impeach the IRS commissioner, and dare the Senate to obstruct it

3) zero out the IRS budget for travel, conferences and office expenses

In the meantime, where are the Koch brothers when we need them? Let THEM put up the $1 million reward, and watch Harry Reid splutter. That would be amusing.

The emails are there, on a server, on a back up tape or the contractor they fired has a copy. Offer immunity, too.
Each email is date and time stamped with to and from. They are out there.
Sabu could use the money or bitcoins.

Doesn’t the NSA have copies of everyone’s emails?