The audacity of hope. 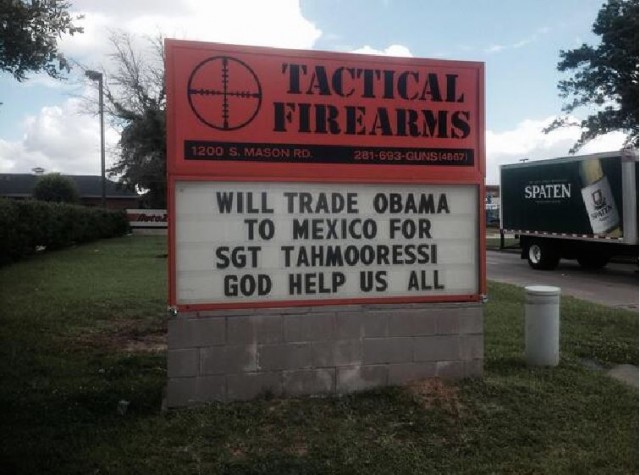 I recently reported on the plight of former US Marine Sergeant Andrew Tahmooressi, who has been languishing in a Mexican jail while authorities hold him on assorted weapons charges for the 3 guns he was carrying in his vehicle.

The backlash against the release of 5 Taliban terrorists from Gitmo in exchange for Sgt. Bowe Bergdahl has dramatically increased dissatisfaction with how President Obama is performing.

Combining elements of these new items together, one Texas gun store owner proposes a prisoner swap that should be much more satisfying (see Featured Image):

Can I get an AMEN? pic.twitter.com/qHfz4ZbE2u

Meanwhile, William A. Thien, the Commander-in-Chief of the Veterans of Foreign Wars, has written directly to Obama in an effort to free Tahmooressi:

I write as the national commander of the 1.9 million-member Veterans of Foreign Wars of the United States and its Auxiliaries to urge your immediate action to secure the release of Andrew Tahmooressi from a Mexican jail.

The charges against Tahmooressi, a Marine Corps sergeant in the Individual Ready Reserve, appear to be a desperate attempt by a failing nation-state to project strength against the United States. What’s urgently needed is for Mexico to release him before irreparable damage is done to the goodwill between our two countries that today is at best tenuous.

A personal phone call from you to Mexican President Nieto can make this happen.

And while the platoon members who served with Bergdahl are smeared for daring to suggest he may have deserted, fellow Marines have an entirely different view of Tahmooressi and his dire situation.

A U.S. Marine who served with Sgt. Andrew Tahmooressi, who has spent over two months in a Mexican prison on gun charges, told Fox News’ Greta Van Susteren Tuesday that his friend’s transformation while in prison is “heartbreaking.”

…Cpl. Brad Meister said on “On the Record with Greta Van Susteren” that is a clear to him that Tahmooressi, who he said was his workout partner, has lost a significant amount of weight behind bars.

“This is a guy that is completely humble, generous, that would do anything for anybody and to hear his voice is just kind of – just a brokenness that is hard, very hard for me…” he said, later adding, “I don’t see how you can just lose so much weight and being treated the way he is and for us, in America, to allow this to go on is really heartbreaking.”

Meister said that one example of Tahmooressi’s selflessness occurred when they were serving together. He said a fellow soldier was injured, and they were running low on tourniquets. Just as they were beginning to lose the soldier, Tahmooressi grabbed the tourniquet from his own supplies and used it to save the soldier’s life.

An Arizona congressman has a more hopeful report:

Arizona Congressman Matt Salmon says a Marine veteran who has been in a Mexico prison on weapons charges is doing well.

Salmon says he was able to visit Sgt. Andrew Tahmooressi on Saturday at el Hongo II prison in Tijuana and the 25-year-old seemed in good spirits.

Prayers are going out for Tahmooressi’s return home. And, as Alcede’s sign says: God help us all.

I like those guys. It’s too bad they’re guilty of currently unknown crimes to be named in the future.

I think swapping AG Eric Holder for Sgt. Tahmooressi would be a better deal.

Think about it: swapping the man who tacitly green-lighted walking over 2,000 guns directly to drug cartels while deliberately keeping Mexican authorities out of the loop – which in any other context would be an overt act of war against Mexico – for a man who took a wrong turn and brought three guns by mistake.

Sounds good to me. 🙂

Couldn’t agree more about the swap. Besides, they wouldn’t want Obama. The knew he is a weak, narcissistic, empty suit. Holder they have a legit beef with, IMHO, since so many Mexican nationals were slaughtered by those guns.

(See Sipsy Street Irregulars and this site (which links to Sispy St. Irr.) for more on this.)

I predict the ATF will appear for a “surprise” inspection before the IRS does.

That said, the IRS will be all over them come tax season next year.

As to Obama calling Nieto: Never going to happen. Not for an honorably-discharged Marine exercising his rights (a.k.a. a “hardened gun criminal”). Obama seems to hate good military service members almost as much as he hates responsible private gun owners.

This is not Tactical Firearms’ first political rodeo. They do stuff like this all the time.

How bad must things get before we stop siding up based on partisan politics and start addressing these scandals on their merit? God help us…we certainly can’t help ourselves.

That’s a very good question to ask Obama and the Communist Democrats. Here, not so much.

But when I do, I expect to get at least a case of Dos XX.

hell, I’d take a couple packs of chicklets for that lying Marxist pig.

They are poor, not stupid.

His Infantile Majesty goes to seemingly any length to get back a deserter-collaborator, but can’t get one of our Good Guys out of a clink in T.J.?!

And, as the sign so aptly states: God Help Us All.

We can get back our soldier very easily: start deporting every illegal alien who came rough our southern border back into Mexico, whether or not they are Mexican.

Estragon, Mexico is not poor; they have oil; their government is corrupt so the country’s oil wealth does not trickle down like it should.

The only way Obama lifts a finger for this guy is if there are terrorists in Guantanamo that want to go to Mexico.