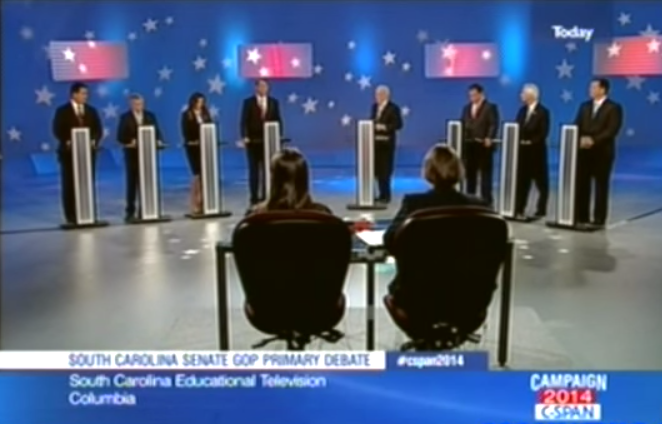 UPDATE – At about 9:15 PM, the Associated Press called the SC Senate race for Lindsey Graham and projects he will not face a runoff election. With 71% of precincts reporting at 9:45PM, Graham is close to garnering 60% of the vote.

Notably, Graham won nearly all of the counties in SC and exceeded the 50% threshold in all of them except Greenville, Spartanburg, Laurens and Union Counties.

Tim Scott is easily winning his primary getting vote margins above 90% at this point. In fact, Scott is over performing Graham by 60,000 votes statewide.

There is a lot of action in tonight’s South Carolina primary election. Polls closed now. We will post results as soon as meaningful numbers come in.

The key race to watch is the Republican primary for United States Senate.  Incumbent Sen. Lindsey Graham will face the voters with six other opponents trying to force a runoff.  If Graham, or any other candidate, doesn’t get above 50% — there will be a runoff election for the top two vote getters on June 24.

We will keep an eye on the Graham race, but also update some other interesting battles.  Incumbent S.C. Gov. Nikki Haley (R) is unopposed in the primary but will face Democrat State Senator Vince Sheheen in November.  There is a tough inter-GOP battle for Lt. Governor.  And 12 Republicans and Democrats are vying for SC School Superintendent.

History will also be made tonight as Republican voters are expected to vote to nominate U.S. Sen. Tim Scott (R) to complete the term he was named to when former Sen. Jim DeMint resigned.  Presuming he wins tonight, he will be the first Republican African-American Senate nominee in South Carolina since Reconstruction.

What the heck is the matter with South Carolina people????

Too many Yankees on Hilton Head, Myrtle Beach, Charleston and Columbia.

Well, I voted against him.
I guess there were too few of me.

They recognize a smart, hardworking Senator who knows how to check the current mess of an administration.

I appreciate the sarcasm.. appropriate response for these results 🙂

The out-of-state know-it-alls who keep calling for Graham’s head got the same advice from me that they have since the last cycle. If you want to beat Graham, get behind a strong candidate and raise $2 million for the primary early, to keep others out.

Once again, they were all big talk and hot air, full of sound and fury, signifying nothing.

In contrast to Cantor in Virginia and Cochran in Mississippi, Graham followed the advice he got decades ago from Strom Thurmond, and ran like he was the underdog challenger from the start.

We’ve had many serious disagreements over the years – he will confirm this – over things like the “Gang of 14” and confirming Holder and Sotomayor, and the structure of immigration reform, amongst others. But I’ll give him this: he will answer every criticism and question in detail. He hasn’t convinced me yet, but not for lack of trying, and I respect that he engages every single point, unlike most politicians.

For those who talk trash about South Carolina, I’ll take my pair of Senators in Graham and Tim Scott against anybody’s.

Who do YOU have in your state?

SC has open primaries…..I cannot find numbers of turnout in the R versus the D primaries but I would be willing to bet that the turnout in the Republican primary is three to one over the Democratic primary. The Ds love Lindsey and they turn out in droves to vote for him. Let’s hope my fellow SC citizens join me and make this a most troublesome 6 years for the lipsticked pig by calling and emailing his DC office at least weekly, hold him accountable.