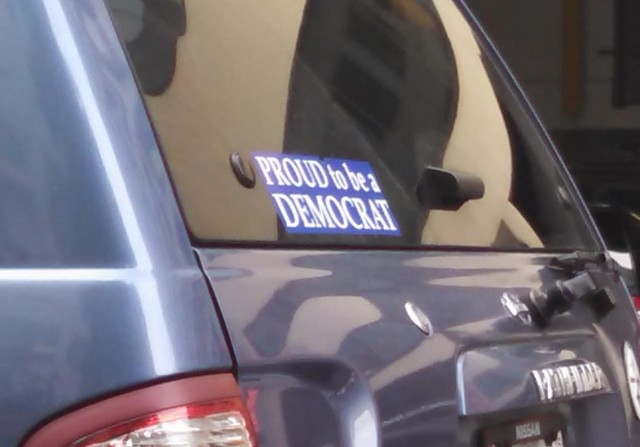 I had not been in D.C. since college, until recently.

This bumper sticker confirmed that my decision to stay away for over 30 years was correct.

I laugh when I see these liberals who think that posting a “Proud to be a Democrat” in D.C. and its ultra wealthy suburban communities in Maryland and Virginia somehow makes them “edgy” and brave. 95% of the the D.C. Beltway is Democratic since it consists overwhelming of welfare recipients, Federal government workers, lawyers, lobbyists, federal contractors, and retired millionaires. To be brave one would have to have a sticker “Proud to be a conservative”, or “Proud to be a Republican on your car and live on Manhattan’s Upper West Side or Cambridge, Massachusetts.

Of course the car owner is proud to be a Democrat. After all, the Democrat party has figured out how to get a military that will turn its guns on American citizens: induct illegal aliens and train them; teach them that those waving the USA flag are the enemy.

As some guy sang, “that’s something to be proud of!”

Is this Squaw Warren’s car perhaps?

Glad I wasn’t eating or drinking anything when I read this.

I listen to the radio podcast of Chris Plante’s show on WMAL, out of DC. There is an ad running for Don Beyer, former Lt Gov of Virginia. He’s running for the Congressional seat of retiring moonbat, scumbag, Jim Moran.

His ad begins with Obama saying that repealing Obamacare is out of the question, then the candidate starts talking about how great the law is and his pledge to defend it. He is described on the ad as a “proud Progressive.” It’s sickening.

If he were running in any district besides this one, he’d never get away with the working. But the repeated trips to DC by his predecessor, Moran, have proven that there are few sane voters in the district, or else very few live ones.

Living up on the hog on the backs of those in flyover country (defined as anywhere except Wash DC).

Of course they’re proud to be a Democrat which has shown itself as being very, very happy taking – through FORCE (and law is nothing but legalized force)- from others for their own benefit.

Notice he/she/it is to driving a car made by one of the bailed out manufacturers.

These always amuse me. I’m immediately reminded of the lady doth protest too much” (Hamlet) and “A man who needs to say he is king is not a true king” (Game of Thrones).

What the sticker means is that the driver is starkly aware the damage his Democrat brand is taking, hence the needed reinforcement with an “I’m proud” declaration.

I suspect that someday he/she will be desperately scraping that sticker off to avoid the angry mobs from the “Districts” outside Capitol City.

Even the car is blue.