Numbers called into question, as well as ideological sponsors. 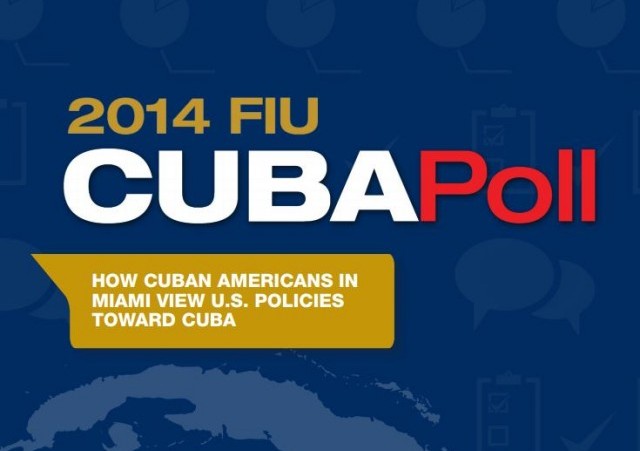 A poll released this week suggests that a majority of Cuban-Americans living in Miami favor ending the Cuban trade embargo. A finer reading calls those results into question.

The poll, conducted by Florida International University (FIU) professors Guillermo J. Grenier and Hugh Gladwin for the Cuban Research Initiative, finds that 52% of all Cuban-Americans and 51% of Cuban-Americans registered to vote favor ending the 54-year long embargo that restricts all imports of Cuban goods and most exports to the communist island. 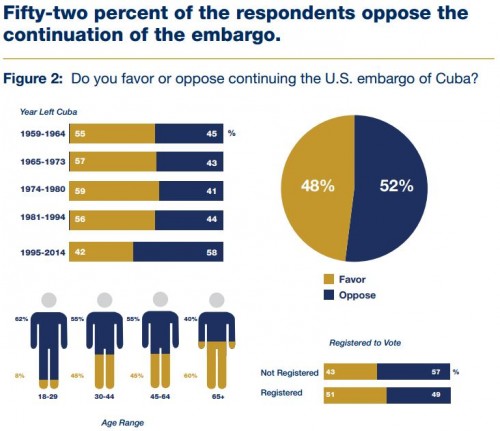 Professors Grenier and Gladwin have conducted the FIU Cuba Poll every year since 1991. Its respondents are 1,000 randomly selected Cuban-Americans above age 18 living throughout Miami-Dade County.

As written in the introduction to the poll, the purpose of this annual study is to “…take an ideological snapshot of the Cuban-American community in Miami-Dade County”.

The professors note that a major finding of the study is the generational divide between those Cubans who left before and after 1994, the year the last major wave of Cuban balseros fled the Castro regime. A total of 35,000 set off on flimsy rafts to make the 90+ mile journey to the USA that year.

The poll finds that Cubans arriving after 1994 favor détente with Cuba more so than the older generations do. The younger generations of US-born Cuban-Americans too favor opening relations much more than their parents and grandparents.

Grenier was quoted in the Miami Herald pinning his findings as evidence of changing demographics favoring younger Cuban-Americans, and what he calls a “re-Cubanization of Miami.”

According to Claver-Carone, this year’s FIU Cuba Poll was sponsored by left-wing ideological groups and purposely manipulated and/or omitted key data.

In the same Miami Herald article cited above, Grenier admits to a crucial omission:

The Herald article notes that this is an unusual practice in polling and surveying.

Grenier claims that every FIU Cuba Poll since 1991 has been conducted this way, so the overall downward trends of hostility towards Cuba hold true. If so, then the percent of those supporting the embargo comprised 87 percent in 1991, 78 percent in 1997, 66 percent in 2004, and 56 percent in 2011.

But, other studies have failed to match the FIU Cuba Poll’s findings.

Miami Democrat pollsters Bendixen & Amanda found in their polling similar generational divides, but that among all Cuban voters 56% support it while 36% are opposed. This poll also found that among all Cuban voters 51% oppose unrestricted travel to Cuba, whereas only 42% favor it. In contrast, the FIU poll found support for unrestricted travel to be at, as Claver-Carone puts it, a “laughable” 69%.

The FIU poll’s findings that did not make headlines also reveal several issues with either data collection or inconsistencies in the psyches of Miami’s Cuban-Americans.

For example, the FIU poll reports 60% do not think people in the US should be allowed to invest in non-government small businesses in Cuba. In regards to Cuba’s official designation as a state sponsor of terrorism, 63% agree it should remain.

Given the numerous issues, Claver-Carone calls the poll “sloppy” and “designed for a sensationalist headline.” The alternative scenario is rampant voter fraud in Miami-Dade County, which is not that unlikely of a possibility.

That two of this year’s sponsors for the FIU poll were George Soros’ Open Society Foundations and the Trimpa Group might explain the slew of red flags.

The Trimpa Group, run by the Democrats’ “answer to Karl Rove” Ted Gimpa, is dedicated to advancing liberal and progressive causes, including the hash tag diplomacy project #Cubanow that is urging the Obama administration to reverse US policy towards Cuba. The campaign also included plastering ads across Washington D.C. However, #Cubanow has refused to release its list of private donors in an effort to “shield” them from personal attacks.

Thus far, there seems to be no direct political or economic conflict of interest between Trimpa and Open Society Foundations with their advocacy to end the Cuban embargo. Yet, these groups are lobbying groups and possibly stand to gain financially from the favorable findings of the FIU Cuba Poll.

“In other words, FIU has gone from having its polls sponsored by ideological non-profit organizations to ideological, for-profit lobbyists.”

“Polls are as deceptive as the questionnaire or the people behind them,” Ros-Lehtinen was quoted saying to Miami’s Local 10 news. “They can be skewed. Questions can be asked a certain way. So I’m not surprised.”

That’s a Democratic gain of 13 points among Cuban-Americans over 2008, according to pollster Fernand Amandi, and represents what he called “a sea change.”

“The dam has finally burst in the long-awaited Cuban shift,” Amandi said. “This is a remarkable change.”