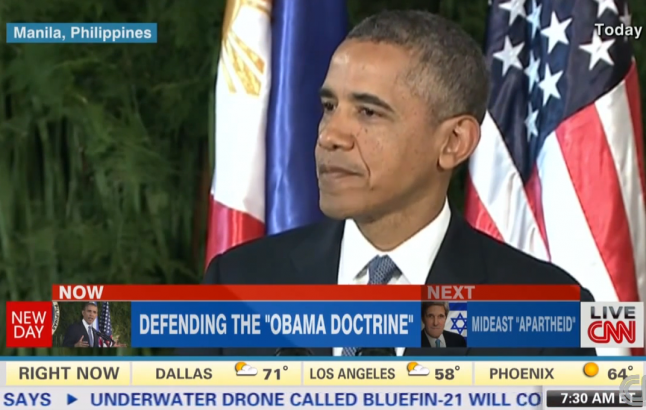 If anyone working in media today wants to help restore some of the damage done to the reputation of their industry, an apology like this would be a great start.

Rather than using their influence to prop up Obama, the editors of the Billings Gazette in Montana are simply admitting they were wrong:

Sometimes, you have to admit you’re wrong.

And, we were wrong.

We said that things couldn’t get much worse after the sub par presidency of George W. Bush.

But, President Barack Obama’s administration has us yearning for the good ol’ days when we were at least winning battles in Iraq.

The latest NBC/Wall Street Journal polls show that Americans are giving Obama lower marks than in 2006 when Iraq was going poorly for Bush and a tepid response to Hurricane Katrina sunk Bush’s ratings.

It’s not that popularity polling should be the final or even best measure of a president. There is that old saw that points out there’s a difference between doing what is right and what is popular.

For us, though, it’s the number of bungled or blown policies in the Obama administration which lead us to believe Obama has earned every bit of an abysmal approval rating.

John Nolte of Breitbart summarizes the rest of the piece:

In their reversal today, the Billings Gazette editorial board does not stop with Iraq. The laundry list of their disappointments is wide and deep: Obama’s un-American surveillance state, the Bowe Bergdahl swap, the mishandling of the VA, the “boondoggle” of ObamaCare, and the administration’s many sins against the media.

Without even getting to the economy, the editors sum it up with, “[T]aken in completely, these demonstrate a disturbing trend of incompetence and failure.”

It’s too bad we couldn’t get this kind of honesty from more members of the media in 2008 and 2012. Better late than never, I guess.

I’d be curious to know whom they supported in 2012. Well, at least they won’t be worshiping the Magic Negro anymore … but there’s always ABC-CBS-CNN-NBC-PBS to keep Barry’s inflated ego up.

These Mea Culpas from the media are just pathetic. It reminds me of Robert McNamara admitting 25 years later that “We were wrong, terribly wrong” about the Viet Nam war.

Exactly. Propping up Obama and suppressing the truth no longer helps them in any way, so they will throw him under the bus just as he did his own grandmother and “spiritual adviser of 20 years.”

non mobile version for people that like to read full item in pc…
http://billingsgazette.com/news/opinion/editorial/gazette-opinion/article_f7f51100-0eb8-5726-922f-b1bf460fcf87.html

Did they do a mea culpa on Jimmy Carter?

No, they think Bush was ten times worse than Carter, I’d guess. Any real thinker knew Obama was a far left commie associated liar from day one … so these guys only admit things are now going badly, but will probably advocate for Hillary as a solution.

Freedom of the Press has recently been interpreted by the Press to mean Freedom of Cheerleaders to look the other way when their side’s quarterback has been a bad and naughty boy.

The mainstream media put all its chips in with Hope & Change.

Let alone a royal flush, they were left with a hand bereft of even a pair of threes.

Their “we’re not biased” bluff is a bust and their hacking and flacking for this fraud, as well as all their sins of omissions and “nothing to see here” dismissals are permanently recorded.

They’ll still have lots of influence with the low-info and willingly useful idiot crowd, but the gatekeepers have been exposed like never before and it’s up to non-leftists to use the myriad examples of media shilling for the Obama admin’s two terms to sway reasonable, middle-of-the-road, Americans open to being persuaded.

LukeHandCool (whose high school classmate, now a politics and media big shot columnist at the LA Times, has tweeted about 100 times about Donald Sterling, but not once about the IRS scandal. All the President’s Men. They’re all behind him)

Good for the Gazette’s editorial board, but the paper we read (or used to) will continue to fully support Obama and his lefty agenda. The Gazette can’t afford to have many of its own reporters anymore, but those still around are mostly lefties. Like most small newspapers, the Billings Gazette gets most of its national and international content from the Associated Press. That organization might as well be part of the Democrat Party.

If you relied totally on a rag like the Billings Gazette for your news, you would probably think Obama and company are doing a pretty good job. You would think Benghazi, Fast and Furious, the VA debacle, and IRS stuff were small potatoes if you even knew about them. You would think his Middle East “policy” was working well. I subscribed to this newspaper for almost 30 years, but I don’t need it any more.

The Democrats are now in the position that they must win the White House in 2016 to keep it from more competent hands.

I can hear it now, future success by the next non-Democrat will, of course, be called “racist” because the reason for the success will be to make our first “Affirmative Action” President look bad, not make America better.

Obama has made both Carter and Nixon look good by comparison.

Nixon cannot be fairly characterized as an incompetent president. His gold window closing had a good purpose (preventing a raid on our gold stash) and his China open door policy has been hailed by both sides as a brilliant move.

All overshadowed by a coverup of his buddies’ bad behavior.

Carter, on the other hand, had a string of bone-headed decisions which had negative consequences lasting for decades.