Dunn will be re-tried on the first-degree murder hung at trial, with jury selection to begin September 22. 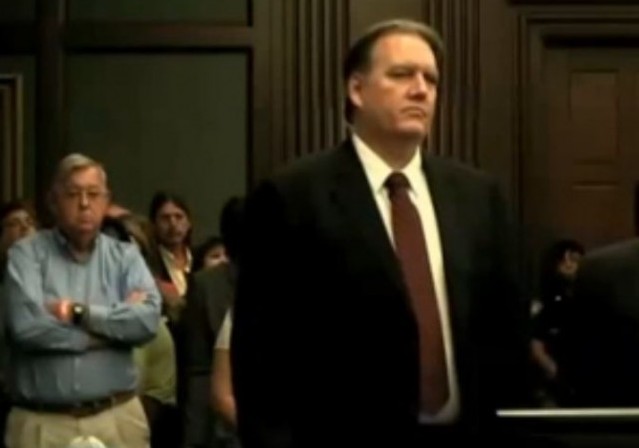 Jacksonville news broadcaster news4jax is reporting that a September re-trial date has been set for Michael Dunn, with jury selection to begin September 22.

This past February Dunn was convicted of three counts of attempted murder for shooting at an SUV carrying Jordan Davis and three companions, all black teens.  Dunn himself is a middle-aged white male.

The three convictions were for firing shots at the three surviving teens as they fled.  Davis was killed by the first three rounds fired, but the jury hung on the associated charge of first degree murder.

Immediately upon the jury returning this finding Florida Attorney General Angela Corey announced that she should would be re-trying Dunn on the murder charge.  The date for that re-trial was initially set for early May, but as mentioned above has now been moved to late September.

Dunn’s sentencing on the attempted murder charges has been delayed until the completion of his re-trial on the first degree murder charge.  At a sentencing it is common for the defendant to make a statement to the court, the victims of the crime, or the victim’s family, and such statements could be used against Dunn if the sentencing were to precede the re-trial, hence the delay in sentencing.  Dunn remains confined in the meantime.

At trial Dunn had argued that Davis, seated in a car parked next to his own, had threatened to kill him and had displayed what appeared to him to be a shotgun, justifying Dunn retrieving his pistol from his car’s glovebox and firing multiple shots into the SUV even as it fled the scene.  The prosecution argued that Dunn had over-reacted to a dispute about the volume of the teen’s music, and was not justified in his use of deadly force against them.

The three attempted murder charges of which he has been convicted will not be impacted by this re-trial of the hung first degree murder charge.  Each of the attempted murder convictions carries a 20 year sentence, and under the state prosecutor’s current application of Florida’s infamous “10-20-Life” law each of those sentences must be served consecutively with no possibility of parole, resulting in a mandatory minimum sentence of 60 years.  Presumably if Dunn is convicted of murder that additional sentence will also be added consecutively to the existing total.

Just last week, however, the Florida supreme court heard oral arguments in Williams v. State in which they are to make an ultimate determination of whether multiple convictions under “10-20-Life” must be served consecutively–at present there is some confusion on this point in Florida law, with some arguing that consecutive sentences are permitted, but not mandatory.

It is reported that Dunn will be represented at his re-trial by attorney Waffa Hanania, rather than his trial counsel Cory Strolla.  Such a change in counsel is common in such circumstances.

Anyone want to SWEAR that can’t happen ?

Using Marissa Alexander as a template why not charge Dunn with 10 shots x4 people for 40 counts x 20 years per shot. or 800 years minimum.
I’m unsure whether to subtract the 3 that hit Davis though. Whats case law say?