Are some “cultural appropriations” more equal than others? 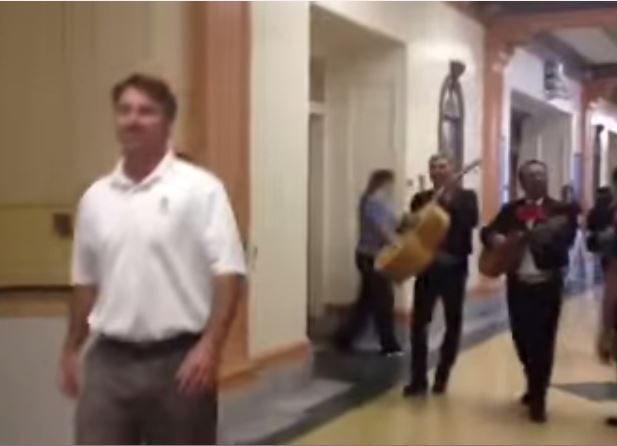 There’s a fine line between funny and, well, not when it comes to senior pranks, and with 18-year-olds doing the decision-making on appropriateness sometimes things can understandably get a little not appropriate. A group of seniors at a Santa Barbara, California high school, however, kind of nailed it this week by hiring a four-piece mariachi band to trail the school’s principal.

The band kept at it for an hour-and-a-half.

The praise for the prank is all over the media and I’ve yet to find anyone attacking the prank as “culturally insensitive” or a “cultural appropriation.” Oh, someone probably is or will, it’s just not prominent, unlike the criticism of most uses of Cinqo de Mayo:

Stanford University’s Inter-Sorority Council hosted a public forum last week in response to protests against a Cinco de Mayo-themed fundraiser at Pi Beta Phi and a number of other Greek life events.

“As a rule of thumb, if an item or tradition is stripped of its original intent or cultural significance, it’s probably cultural appropriation,” said the moderator in opening the discussion.

He added cultural appropriation is the stealing of intellectual property, traditional knowledge, cultural expressions, or artifacts from someone else’s culture without permission – and it’s made worse when “the source is a minority group that has historically been oppressed.”

I wonder why the difference?

I wish I had been that clever in high school.

“He added cultural appropriation is the stealing of intellectual property, traditional knowledge, cultural expressions, or artifacts from someone else’s culture without permission – and it’s made worse when “the source is a minority group that has historically been oppressed.””

Wow. So, all the corn farmers in America are guilty of “stealing of intellectual property” ? They should say ‘May I ?’ to the Indians or Mexicans or whoever it was before planting ?

Wouldn’t they need to be asking something like “maize I be using your corn?”

“As a rule of thumb, if an item or tradition is stripped of its original intent or cultural significance, it’s probably cultural appropriation”

By the same sign, if they’d hired a bagpiper someone could have brought out the highland clearances and the Battle of Culloden.

Slate.com changes its tunes based upon Progressivism’s moral turpitude.

Calculus was developed by a white European (maybe two white Europeans depending on if you are a Team Newton or a Team Leibniz supporter) so non white Europeans should not use or benefit from anything derived (yes a pun) using the Calculus?

The rules are different for white people’s culture and inventions. Everybody gets to use those. They can even concoct stories about how some non-European culture actually invented everything of any value.

I wonder why the difference?

Not done by Republicans. They do not want to attack high school students who count as “theirs.”

most uses of Cinqo de Mayo

I’d like to see at least enough cultural sensitivity to spell ‘cinco’ right.

I will always treasure Baracula’s supremely culturally sensitive formulation of….

Anybody with even a slight knowledge of history knows that people-groups have been using ideas from other people-groups (without express “permission”) for millennia. That process has been a key to developing language, sciences, & various practical technologies to make life more pleasant. You’d have to go to the Amazon jungle to find societies that have not engaged in “cultural appropriation” in any significant measure.

So the ‘melting pot’ idea of America was all a big theft, eh?

Basketball was not invented in Africa.

Peoples around the world drinking Coca-Cola, are they involved in this cultural appropriation, or are they just victims of American cultural imperialism?

Since for many years peoples around the world, especially the young, have yearned for things American, maybe our culture has something they find superior to their own culture.

Actually, grabbing others “cultural” crap is part of the assimilation process, a recognition of hey, maybe your culture is ok. Imitation is the highest form of flattery.

“Cultural appropriation”? Do they mean like Elvis recording Big Mama Thronton’s song “Hound Dog” which was written by the team of Lieber and Stoller? These two Jews also wrote songs for Jewish groups like The Coasters, Clovers, Swinging Medallions Tams…

Should every non-American be accused of “cultural appropiation” for using ” someone else’s culture without permission”?

Or is this just another form of PC bullying?

-Let’s ban Judo from the Olimpics!
-Let’s imprison any non-Chinese who dares to eat noodles!
-Only Italians should be allowed to make pizza.
-Close Taco Bell!
-No more sushi! Make California Rolls illegal!
-Death sentence to any and all non-Irish caught wearing green on March 17.

Oh boy!
We need Forrest Gump on a loop: