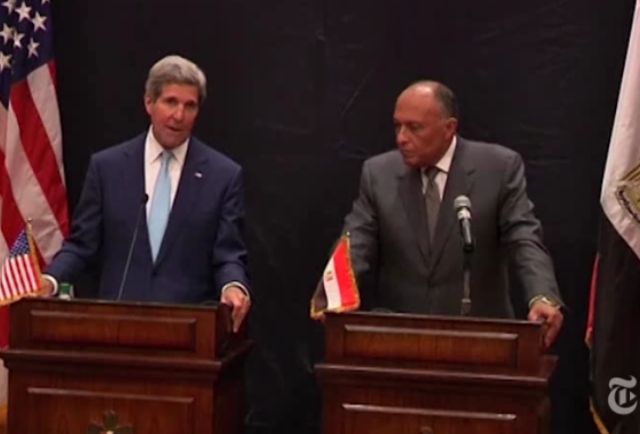 Secretary of State John Kerry was in Egypt on Sunday at the start of his trip to the Middle East and Europe this week, during which the situation in Iraq is expected to be a major discussion point.

More on Kerry’s comments from NPR:

In a press conference following his meeting with el-Sissi, Secretary of State John Kerry said the United States is not responsible for what is happening in Iraq today.

“What is happening in Iraq is not happening because of the United States in terms of the current crisis,” Kerry said. “The United States shed blood and worked hard for years to provide Iraqis the opportunity to have their own governments.”

Kerry said the U.S. would like the Iraqi people to “find leadership that is prepared to represent all of the people of Iraq, that is prepared to be inclusive and share power in a way that will maximize the ability of Iraq to focus on the real danger at this moment from an external source which is [ISIS].”

Kerry added that the United States, however, will not dictate who Iraq’s next leader should be.

“That is up to the Iraqi people,” Kerry said.

Kerry also spoke about the threat that ISIL (aka ISIS) poses, saying that “ISIL is a threat to all of the countries in the region.”

“No country is safe from that kind of spread of terror, and none of us can afford to leave that entity with a safe haven which would become a base for terror against anyone and all, not only in the region, but outside of the region as well,” Kerry said.

Additional comments from Kerry on video below, from the NY Times.

Do the “Obamanites” take ownership of anything they touch?

No more than a flash mob in a china shop.

Well, you know… Obama killed bin Laden… even though he didn’t actually do it himself.

Of course the US is not culpable. That would mean Boy Wonder has screwed up something again. Heaven knows, Boy Wonder is Prince Perfect.

SoS Kerry’s pursuing a “diplomatic” “political” solution, LOL, Kerry’s next word will be “peaceful” when talking about Muslim Terrorists

How low we have sunk. “It’s not our fault,” says the little American boy.

Well, I am betting John Kerry lied continuously to his mother, too.

We are getting the Bart Simpson treatment: “I didn’t do it”.

The United States is not responsible.

Barack Obama and Hillary Clinton are.

Our people in Iraq began negotiating the next SOFA shortly after the first was signed. There were two major items to be cleared, immunity for US personnel and the actual troop levels.

Obama had over three years to finish that but failed to make any effort at all. Those on the ground felt the issues would be easy to resolve, but Obama would never specify a troop level to request or accept, despite constant attempts.

The spineless one blames the immunity clause, but Malaki had refused that at first in 2008, too, but gave in. Obama never tried.

Wasn’t the whole point of Benghazi to arm the Syrian rebels with weapons who later turned out to be ISIS? In effect, the Obama administration sowed the seeds which sprouted in Iraq.

The US through Benghazi, with the help of Saudi Arabia and Turkey has funded and trained the rebels that morphed or melded into ISIS group.

So, yes the USA is responsible for the kidnapping, persecution and MURDER of hundreds of thousands of innocent CHRISTIANS in Egypt, Syria and Iraq.

But Hillary and Barack, Nancy and Harry, John McCain, McConnell and John Kerry, Leon Panetta and the rest, do not care about the consequence of their wheeling and dealing with the lowest of Islamists from Hamas, to the Muslim Brotherhood to the various fake ‘rebels’.

Our leaders are vile, despicable people.

Do they even realize how stupid they look?

“It’s not our fault, even though we voted for the war and screwed up the withdrawal. Obviously it’s George Bush’s fault. Both of them.”

ISIS, a conglomerate of all the ‘rebel’ Al Queda-linked Sunni-Islam jihad groups in Syria and Iraq, puts single women in Iraq and Syria on notice. Rebels have a right to rape you.

These are the kind of people Hillary, Barry, Kerry and McCain have chosen to praise and support with arms and money.

These are the persecutors and murderers of millions of Christians and Shiites all over the Middle East.

These people are dirty, ruthless, evil.

They are kidnappers (500 Christian children in Egypt alone.

Hey, at least he didn’t blame Bush. Not this time anyway.

Obama and his administration are not responsible for the presence of the Middle-East, but they are responsible for the disaster that is the Middle East today. Iraq, Afghanistan, Syria, Libya, Egypt; refugees; cities, towns, and villages in smoldering ruin; gassed citizens; persecuted Christians, Jews, Druze, women, gays; strengthened enabled PLO, PLA, Hezbollah; Israel’s isolation; nuclear Iran; the non-existent al Qaeda. In varying degrees the whole long list was all there when he came into office. And every one of them—every single one—is orders of magnitude worse for millions, the occasional dictator and a mullah here and there excepted, than when he took office. And that’s just the Middle-East portion of foreign affairs.

John Boy Kerry is a Lying Sack of Fecal Matter.

Sorry, Mr.Loathsome Putz, it is ENTIRELY because the Obama Administration chose to ABANDON THE HUGE VICTORY WHICH THEY INHERITED.