Two Hamas members. The mother of one suspect is proud of her son. 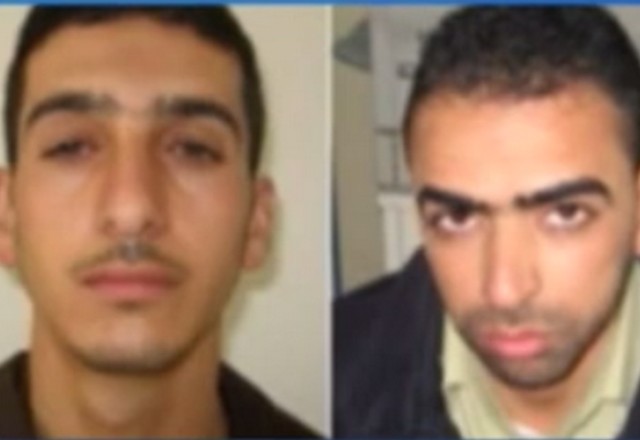 The suspects were said to have disappeared prior to the abductions. The two kidnappers are Amer Abu Aysha, a 32 year old locksmith who is married with three children, and Marwan Kawasme a 29 year old barber. Both have long associations with Hamas and, according to a report published in The Times of Israel, both attended the same mosque.

While Abu Aysha’s mother described her son as a devoted family man, she also told the Times that “if her son did take part in the kidnapping, she was proud of him and hoped he would continue to evade capture.”

Abdullah Kawasme, an uncle of the latter, was killed in a fight with Israeli security forces in 2003.

The IDF blog tells more of the ties both suspects had to Hamas:

Israeli authorities arrested Kawasme several times for his crimes as a member of the Hamas terrorist organization. He was imprisoned for the first time at age 18 and spent ten months in custody until August 2004. After Kawasme’s release, Israel detained him again on four occasions.

In 2010, when security forces last investigated Kawasme, he confessed that Hamas’ military wing had recruited him to operate for the organization in Hebron. In 2009, Kawasme participated in Hamas-led military training, attempted to obtain materials for explosives, and helped the terrorist organization recruit new operatives. In response to these actions, Israel detained Kawasme until March 2012.

Israel first arrested Abu Aysha in November 2005. After investigating the terrorist, Israeli authorities transferred him to administrative detention until June 2006. He was arrested again less than a year later.

Abu Aysha’s brother Zayd was killed by IDF forces in 2005 when he tried to throw an explosive device at them. His father has been arrested a number of times for terror activities.

In November 2005, Abu Aysha’s brother was killed while attempting to hurl an explosive device at IDF soldiers. Israeli authorities arrested his father several times for a range of terror activities.

Avi Issacharoff reported in The Times of Israel that unnamed “Hamas officials in Hebron confirmed the two suspects were members.”

According to the latest report, Israel arrested 9 more Palestinians and searched 40 sites around Hebron. Also in advance of the Muslim holy month of Ramadan, the IDF is planning to redeploy its forces.

Earlier this week, The New York Times profiled a Bedouin tracker and the role trackers play in finding the missing teens.

They are like a forensics unit, in nature. An intact spider web means no one has crossed. Dewdrops on a horse print says it was made that morning. Different-colored dirt close by suggests someone might have recently dug a hole.

“When you buy a newspaper, you look at the headline, you know what’s inside,” Major Mazarib said. “I look at the ground, and it’s like my headline.”

Israel21c reported that while the search for the missing Israeli teens continues, the work of Save a Child’s Heart continues too.

“Children are children”‘ says Dr. Lior Sasson, SACH chief surgeon, “for us it doesn’t matter where the children come from, every child deserves to receive the best medical treatment and children from both sides, shouldn’t be a part of the conflict.”

Though Save a Child’s Heart treats children from all over the world, about “50% of the children are from the Palestinian Authority, Jordan, Iraq, Syria and Morocco.”

That mother is as demented as the creature she calls her son. islam is a toxic substance that warps minds.

Israel needs a death penalty. It is Biblical. It is folly not to have one when you are beset by terrorism on every side. It is foolish vanity not to have it cuz it’s as though you are trying to say how high minded you are. BS.

When Israel finds these thugs, a swift trial and an even speedier hanging with a bacon butt-plug as a side order of deterrence.

“if her son did take part in the kidnapping, she was proud of him and hoped he would continue to evade capture.”