Hillary Clinton and the Taliban Five: What, me worry?

Hillary Clinton and the Taliban Five: What, me worry?

Hillary Clinton says “these five guys are not a threat to the United States.” 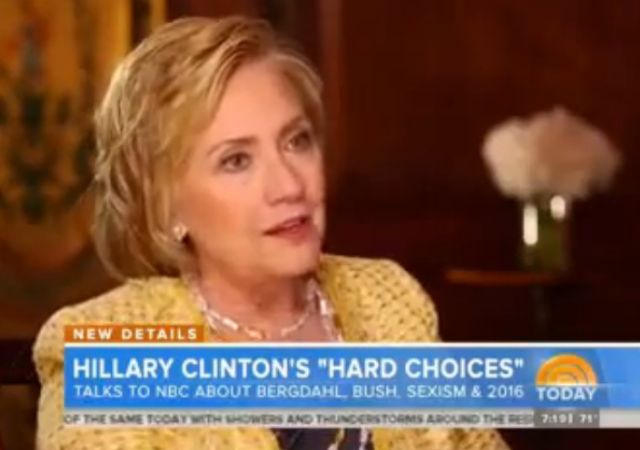 If Hillary Clinton becomes the Democratic presidential nominee in 2016, her Republican opponent had better show part of this clip.

I’m surprised it isn’t being talked about more, because it is positively Obaman in its offensiveness and duplicity, and its contempt for the listener. It also comes across as insincere and unconvincing, but that never stopped Obama either:

Let’s contemplate that in print:

These five guys are not a threat to the United States. They are a threat to the safety and security of Afghanistan and Pakistan. It’s up to those two countries to make the decision once and for all that these are threats to them. So I think we may be kind of missing the bigger picture here. We want to get an American home, whether they fell off the ship because they were drunk or they were pushed or they jumped, we try to rescue everybody.

Hillary must think the American people have forgotten why we went into Afghanistan in the first place. Maybe they have; after all, what difference does it make? It happened so long ago—twelve and a half years, and even longer ago by the time the 2016 election rolls around—that a great many of the voters to whom Hillary expects to appeal would have been little children back then.

But just as a refresher, the now-ironically-named “Operation Enduring Freedom” was launched in Afghanistan after 9/11 because the Taliban who controlled the country had provided a safe haven for al Qaeda, from which the terrorist group trained and equipped jihadis to wreak havoc around the world, including the US—and including the 9/11 attacks. The masterminds resided in Afghanistan with the Taliban’s cooperation, approval, and protection, and the Afghan war with the US would not have occurred had the Taliban agreed to turn the culprits over and close down al Qaeda operations in their country.

The war was very widely supported because that rationale was well understood at the time. The Taliban Five were imprisoned twelve years ago in relation to that war, because they were among the Afghan Taliban leaders.

Hillary Clinton was in the US Senate when this all occurred, and she voted for the war:

Clinton strongly supported the 2001 U.S. military action in Afghanistan, saying it was a chance to combat terrorism while improving the lives of Afghan women who suffered under the Taliban government.

I’m sure the release of the Taliban Five won’t hurt those women, right? And the Five won’t host and support al Qaeda any more? And their release wasn’t a PR coup for both the Taliban and al Qaeda? And none of this could possibly end up affecting the US—any more than it did on 9/11/2001?

Compared to that utterance, it almost seems minor that Clinton uses a ridiculous analogy for Bergdahl’s act of desertion: a sailor falling off a ship. Lame, duplicitous, absurd—and yet Hillary must think Americans will buy that.

I suppose what she really thinks is that it doesn’t matter, because she’s famous and beloved and a woman and a liberal, and the Democrats really don’t have many better alternatives. So what difference does it make what claptrap she spouts?

Of course, Hillary, these guys are not a threat to us.

Wait… Just who are ‘these guys?’
Do you really know?

He is one of the 5 Taliban released from Guantanamo in exchange for Bowe Bergdahl.

Obama, Kerry, and Hillary assure us we don’t need to worry about him or any of his buddies.

Here is a picture of Mohammed Fazl doing his thing.
(Do you think this picture will appear in the NY or LA Times? Or the evening news? Perish the thought.)

WARNING: This picture is blurred but should not be viewed without caution.
http://www.bookwormroom.com/wp…

Well…
Thanks, Obama! Good job, Kerry!
What a good job you guys are doing!
I know I sleep better at night.
Just like Hillary does.

There is a very strong likelihood that one or more of the five will prove her prediction to be very wrong in the next two years.

Then what, Hillary? Another: “oops, I was wrong (like I was when I voted to authorize the Iraq invasion). My bad.”

Absolutely correct but she is betting that the person won’t be the one actually pulling the trigger so there will be deniability in the haze. Then she goes onto say that the terrorists are threats (to Afghanistan and Pakistan) so she has deniability and can say “I told you they were threats”. This is such a careful threading of the needle, a complete PR exercise that relies on the low info viewer not making the connection that terrorism against Americans isn’t fostered by what happens in Afghanistan and Pakistan.

(Apologies, I meant to hit the reply button but hit the thumb down button instead but I don’t seem to be able to reverse this)

Thanks for the info John!

Why she still sounds the way she did ever since she was born (1947, in Chicago, Park Ridge, Illinois.

Nothing has changed since she was a Po’ Little Rich Girl of the Democrat Chicago Machine going to the Po’ folks’ college of Wellesley College – all set with over-sized MacMansion fairy tale castle buildings.

SNARK SNARK – for the humor bereft.

If the principle is “Rescue everybody” which is a great principle, then why is it applied so inconsistently? Does it apply to military or to all US citizens? What about the Marine in Mexico? What about the wife of the US citizen who will be executed for being a Christian? Why don’t reporters ask these follow-up questions about the principles (or doctrines as they like to term them).

If these guys are not a threat to America why did we imprison them in the first place? If their problem is that they are “only” a threat to Afghanistan and Pakistan but we imprisoned these guys to help the population of Afghanistan and Pakistan why do we not turn them over to the custody of these countries so they can be put on trial? Have we stopped caring about the people of Afghanistan and Pakistan? Are they no longer allies? Is this the way we treat our allies by turning terrorists loose? This whole thing is really hard to understand and every time one of these decision makers tries to explain things it only gets murkier, there is simply no clarity and understanding being offered to the average American.

“Have we stopped caring about the people of Afghanistan and Pakistan?”

A very nice case can be made that the Obami really don’t care about much of anybody, anywhere.

Does Obama really care about Americans? I see very, very little evidence that he does.

Yeah, none of these five released murderers/coconspirators would ever consider attacking a U.S. Embassy, now would they?

Hillary is in deep denial with blind spots so big she can’t see America anymore.

I’m wondering what happened to the State Dept. “army” of 5,000 that Hill-larry amassed, complete with their own air assets?

Presumably, those guys were seasoned vets. Where are they?

So much for Hillary promises, but that was so 2010ish, what difference, at this point, does it make?

Clinton, who has made women’s rights one of the hallmarks of her political career, promised a group of distinguished Afghan women that she had a “personal commitment” to ensuring that their rights must be fully guaranteed in any future Afghan political system.

“It can’t come at the cost of women and women’s lives,” Clinton said …

Good grief. I didn’t know you could airbrush video. That soft-focus camera work makes my eyes cross. Can’t show Hill’s wrinkles, can we? But the media is not pro-Hillary, right?

The woman is delusional.

Or suffering from dementia.

God help us if she is nominated.

And, to top it all off………….this imbedded video:

(Don’t go by the /titleheadline – it’s a ruse to get ppl to see the hypocrisy of the left and the journ0listers – but I repeat myself. Watch the video.)

Hillary is so UN-presidential. So beyond being able to handle an intense presidential election campaign cycle and NOT make many such glaring, obvious faux pas along the way…………..

What she means is the same thing that Michael Moore meant: the Taliban leaders are not a threat to her personal physical safety.

In both cases, the lives of soldiers don’t count.

I do not want anybody with that careless mindset to have the power to send our troops into harm’s way.

Hillary is the most cynical, careerist, pandering politicians we’ve seen in a while.

Some smart young reporter needs to ask Hillary, “If releasing the Taliban 5 is justifiable because they are harmless to the US, are you stating it was unjustified to take them prisoner in the first place? Can you please explain how they went from dangerous military opponents best killed or captured to harmless and worthy of freedom?”

Watching the end of the video, the 2 reporters appear in front of a series of huge banners with Hillary Clinton’s picture. Is it just me or does this seem like a creepy personality cult?

“It’s up to those two countries to make the decision once and for all that these are threats to them.”

How very … “Progressive” … this thought is. It’s not the intentions or capabilities of the people making threats that count, it’s how the people being threatened choose to acknowledge or perceive the threats. Or not.

By this logic, all we need to achieve world peace is to make the decision that the Jihadists just aren’t threatening us! It’s so simple! I fully expect all hostilities world-wide to end tomorrow!

While we’re at it, let’s end all crime in the United States by declaring the entire country a “crime-free zone” and making the decision that it can’t/won’t happen here! It’ll be like a “Gun-Free Zone,” except for crime and war! Let’s also decide that fire just isn’t dangerous, so that we can remove all smoke detectors and fire extinguishers from residences and let wildfire evacuees return to their homes.

Please please please, Hillary. Show America how right you are and take in the five non-dangerous guys. You have a spare house. Let them use it. They’ll thank you for letting them assimilate into the American culture and repent their ways.