for someone else to lose. 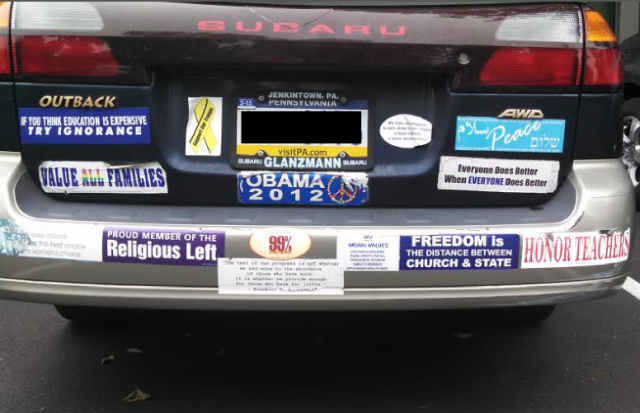 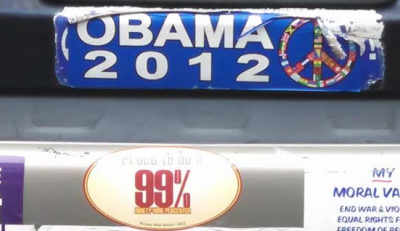 Wanna bet that car belongs to a…

And, regardless of what they may declaim, their TRUE religion is Collectivism.

Judging by the ones I see in my area, their ad slogan could be: Subaru – You don’t have to be a moonbat to drive one, but it helps.

Now wait! My conservative mother in law who can’t stand Obama and loves to listen to Dennis Prager on the radio ( she used to be a teacher, so she likes his University ), drives a 2015 Subaru Outback and still has her old Subaru Outback.

The important thing is the term “religious Left”, bottom, left0hand corner. There are many denominations of both Judaism and Christianity today – for example, many of the “high Church” Christian denominations – for whom the Democratic National Platform has replaced the Bible.

Whether it involves sending a poor refugee child back into the clutches of Castro, murdering babies (generally unborn) and the elderly (and Jews, of course!), or forcing poor people to chose between freezing, starving, or taking charity, it is something of a Religion In Name Only.

And since they basically have a common theology (every belief is the same, no-one has the truth, etc.) they are extremely intolerant of people whose beliefs are different from theirs.

Their religion is Socialism and Islam is the monotheistic faith that they have respect (and fear) for.

Two of those stickers need to be combined, into: Freedom is the distance between EVERYONE and the state

I could only give you one thumbs-up, so this counts as a second. And your combination would make a great bumper sticker!

Needs a bumper sticker that says “The State Is My Church”

Everyone would “do better” if all would “DO” more rather than take more.

The left’s PC religion is deep in our government, using iron maidens like Lerner to torture the tea party “infidels”.

Associating religion (i.e. moral philosophy) with left-wing ideology is to mock all concepts of positive morality.

The “religious” left believes in evolutionary creation, but considers evolutionary principles to be negotiable. They believe in spontaneous conception, aka “stork’s delivery”, which rationalizes abortion/murder. They replace individual dignity with a degenerate concept of “diversity”. They adhere to doctrines of collective and inherited sin. They practice a faith-based science which is dependent on inference or induction (i.e. created knowledge). They routinely create moral hazards with policy proposals of selective exclusion (e.g. normalization of select dysfunctional behaviors).

You make a good point, but to me, “PC religion” is the best description for their faith based beliefs, belief in their superiority, and willingness to condemn all “unbelievers” to hell. Some Christians may say unbelievers will end up in hell, but leftists will try to send you there now, via government. Their higher power is above government, which is why Obama’s breaking of laws is no big deal to their faithful.

Their belief in “diversity” is blind faith. Same with most of the inconvenient “truths” pushed by their manipulative “cult leaders”. At its root, their moral philosophy is communism. Or as someone above put it “the state is their church”.

Perhaps the ideal true religions were founded in morality, but with social justice infiltrating churches, and abuse of position in the church common, the distinction is not so clear.

Many old religions were closely aligned with the power of their state, if not at their founding, not long after. That problematic relationship would seem to be exactly why our founders required separation of the organized church from the state. And that powerful combination is exactly why the left seeks to act as a religion (devote followers of Rev. Gore, Rev. Sharpton, Rev. Diversity, at the Government Union Church) that is NOT separated from the state.

They might mock what “religion” should be. Perhaps theirs is counterfeit .. or a cult … but “leftist religion” does describe their devotion to a (man-made?) power they accept as transcendent to our constitutional government.

Islam is not founded on morality either, but it’s usually called a “religion.”

Moral philosophy is not the same thing as religion. Philosophy is a matter of questioning and debating propositions in search of truth. Religion is essentially a matter of received doctrines that are to be accepted as true and (more or less) beyond debate. Philosophy rests on ratiocination; religion rests on faith.

It isn’t that religion doesn’t involve any reasoning or any elements of moral philosophy, or that the boundaries between religion and philosophy are always sharp and clear, but in essence they are different things. (Religion sometimes teaches that one’s faith should increase even as the moral comprehensibility of events decreases.)

Car Talk took a completely non-scientific poll and queried their lesbian and gay listeners, and apparently some straight and bisexual people, too, asking for nominations of the best queer vehicles.

Our lackeys have culled through thousands of nominations… nominations from gays, from lesbians, from boring heterosexuals like us… and from those of you who fall into the “other” category. Or “all of the above.” Not that there’s anything wrong with that.

Starting with the Top 10 Lesbian Cars, we have:

We’re drivin’ down the road lickety split in our Volvo…

When I think of the “religious left” the first name that comes to mind is Jim Jones.