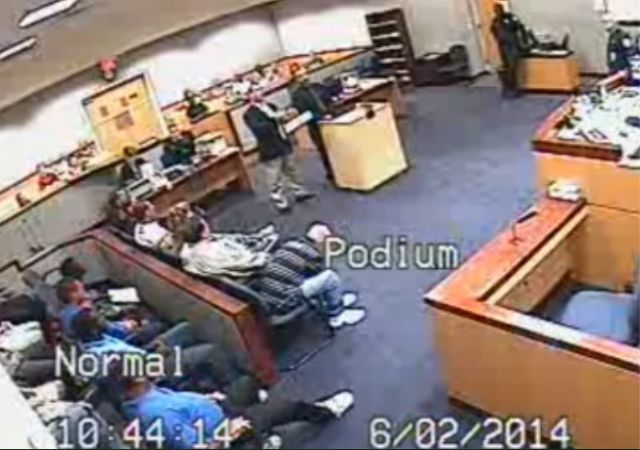 This is something you probably don’t see every day.

A Florida judge and a public defender allegedly got into a scuffle Monday, as a courtroom full of people witnessed the exchange of words that preceded the bizarre incident.

Court deputies had to break up a physical fight between a Brevard County judge and a public defender after an argument during a hearing on Monday.

Judge John Murphy is accused of punching veteran public defender Andrew Weinstock after the two had words during court in which Murphy allegedly pressured Weinstock to get his client to waive his right to a speedy trial.

“You know, if I had a rock I would throw it at you right now,” Murphy tells Weinstock. “Stop pissing me off. Just sit down.”

The judge allegedly asked Weinstock to come to the back hallway, an area where there are no cameras, which is where the fight broke out.

“If you want to fight, let’s go out back and I’ll just beat your ass,” Murphy tells Weinstock before the two head out of the courtroom.

From there, you can hear a scuffle break out in the hallway.  A sheriff’s deputy reportedly intervened and stopped the fight.  Moments later, those sitting in the courtroom can be seen and heard clapping for some reason as the judge is heard re-entering the courtroom. The public defender does not appear to return to the courtroom.

After taking his seat, the judge said, “I will catch my breath eventually…Man, I’m an old man.”

The full video, which provides fuller context than the shorter clip above, is available at Florida Today. The specific exchange there begins at about the 2:30 mark in the video.

The public defender’s office said Weinstock had been grabbed and struck once both men were in the hallway, according to WFTV, though neither Weinstock nor the judge had yet offered a public statement themselves at the time of this writing. (NOTE: see update below)

By Tuesday morning, Judge Murphy was absent from the bench and another judge had taken over his scheduled proceedings, reported Florida Today.

The day after a Brevard County judge allegedly fought with a public defender, the hall outside his normal courtroom was abuzz with chatter about a video that shows part of the incident.

Some said they saw it on Good Morning America. Others watched the video on their smartphones while awaiting their own court hearings.

Outside the courthouse, news trucks parked and television reporters did live takes on the front lawn.

No charges had been filed, but a sheriff’s spokeswoman told Florida Today that an investigation into the incident was still ongoing Tuesday morning.

UPDATE: Just as this post was prepared for publication, Florida Today posted the following update:

Chief Judge John M. Harris issued a written statement this afternoon related to an incident and alleged fight that occurred between the judge and assistant public defender Andrew Weinstock.

Harris’ statement says Murphy’s cases have been reassigned to other judges.

“Moreover, Judge Murphy has agreed to seek anger management counseling and treatment during a temporary leave of absence,” the statement says.

so he gets away with assault.
nice.

It’s just one more example that the rule of law has pretty much gone by the wayside, especially with the stellar example our President gives.

When the Prez and AG decide they don’t have to abide by the rule of law, I’m sure a lot of other people will decide they shouldn’t be bound by it either.

Every one found guilty after the fight should appeal based on his obvious unfitness at the time.
BTW Never wave your 6th Amendment rights, or any of the others.

You do realise the guy is a “magistrate” and he/’s havinmg pretrial hearings? No one was found guilty or innocent that day, unless they pled.

Don’t know about Florida, but magistrate here can hear misdemeanor and some felony cases.

BTW, what would you do if two weeks later after not waiving your rights and taking a one month delay, you ask for a continuance and the judge denied saying “you wanted a speedy trial you got it”?

depends on why I need delay. If I have legitimate reason I appeal, and request change of venue.

Ah, the majesty of the law.

C’mon, this is Florida. It’s not like a real state.

I lived in Brevard County, Florida at Melbourne for 12 years (1980-1992) and that was just a typical day for the trailer trash who make up the county government.

Wouldn’t it have been easier/more appropriate to just find him in contempt and send him down to a cell for a few hours?

I gather from the prosecutors statement after and the applause, plus the courtroom behavior that the guy had a contempt citation coming.

I have to wonder if Judge Harris wasn’t thinking “Good for him.”

I gather from your comments you are a police officer or prosecutor to lazy to get it to gather for court and would rather run the clock to pressure defendants into accepting a bad plea deal.

Can Floriduh’s judicial system get any more bizarre than we already knew it to be?

I keep hearing rumors of Judges who have a habit of throwing their gavels. This is the first fist fight I’ve heard of.