Flood of Children at Southern U.S. Border Getting Worse

Flood of Children at Southern U.S. Border Getting Worse 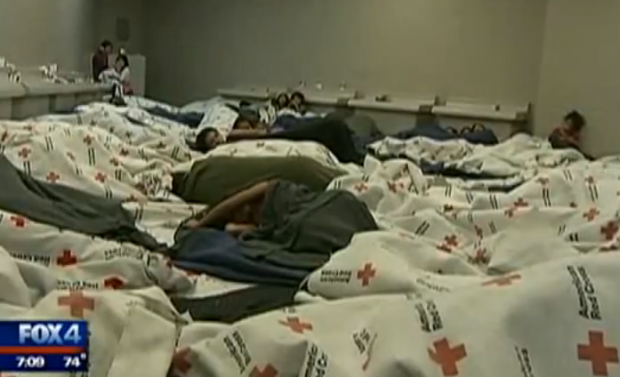 Reports from the United States’ southern border continue to worsen as thousands of illegal, unaccompanied minors are flooding through from Mexico.

More than 52,000 children have entered the country illegally in recent months, many of them coming into the U.S. through South Texas. Former Zapata County Sheriff Gonzales, who now works as a consult with law enforcement agencies along the Texas border, says space is running out to house the children and adults that are coming across.

As feared, the flood of Central American children and adults has begun to spread disease into the U.S. Border patrol agents are reportedly getting sickened from the refugees.

Kenneth Wolfe, a spokesman for the U.S. Department of Health and Human Services, says the unaccompanied child was recently hospitalized after being diagnosed with swine flu, or H1N1. Wolfe says officials believe this is an isolated incident but are closely monitoring all children at Lackland and other similar shelters the agency is operating around the country.
“That tells you that when you’ve got kids coming in from some of these countries where they don’t have great health systems, we gotta watch out,” says Cuellar. “I’ve talked to border patrol down in McAllen. They’ve seen TB; they’ve seen chicken pox; they’ve seen scabies. And according to Border Patrol, 4 or 5 of their agents have tested positive for those diseases.”

In the meantime, House Minority Leader Nancy Pelosi (D-CA) will be traveling to South Texas to a makeshift refugee camp. But residents say she will be missing the real crisis — American citizens’ whose land is being overrun by illegal immigrants streaming over the border.

“I’ve had a 7-year-old little girl from El Salvador with her mother come to my front door just in dire need, lost, needing help,” says Linda Vickers, who owns a Ranch in Brooks County.

Vickers says even though her ranch is about 60 miles north of the border, bands of illegal immigrants are still crossing onto her land by circumventing border patrol check points.

Vickers goes onto speak about the things Pelosi might see.
“On one hand, I have women and children and young people in distress — and then on the other hand, I’ve had a criminal element of gang members,” says Vickers.

“Young men that have had multiple deportations and do not want to get caught. I’ve heard them tell border patrol as they’re loading them into their vehicle ‘That’s okay, Obama’s gonna let me go.’”

Cloward-Piven keeps getting mentioned … this is an article about the radical candidate Obama back in 2008.

When seen together, the influences on Obama’s life comprise a who’s who of the radical leftist movement, and it becomes painfully apparent that not only is Obama a willing participant in that movement, he has spent most of his adult life deeply immersed in it.

But even this doesn’t fully describe the extreme nature of this candidate. He can be tied directly to a malevolent overarching strategy that has motivated many, if not all, of the most destructive radical leftist organizations in the United States since the 1960s.

The Cloward-Piven Strategy of Orchestrated Crisis
…

1. The offensive organizes previously unorganized groups eligible for government benefits but not currently receiving all they can.
2. The offensive seeks to identify new beneficiaries and/or create new benefits.
3. The overarching aim is always to impose new stresses on target systems, with the ultimate goal of forcing their collapse.

Memos show team Obama was planning for this influx months ago, yet now claim they first heard about it on the news.
Chaos is the Middle East
Chaos at the borders
Chaos in government (they lie to congress about every scandal, and govern against the people’s will, weaponizing agencies against a free citizenry)

Whose plan was it anyway, to turn traditional America into a third world country in the name of “diversity”?

Whose plan was it anyway, to turn traditional America into a third world country in the name of “diversity”?

That has been the Marxists dream since Stalin, and has been in the works since at LEAST Khrushchev slammed his shoe on the UN floor screaming, “We will bury you!!”

It’s been the CPUSA’s plan all along. And, if you read Stanley Kurtz’s book Radical in Chief, you will know that Obama has been groomed for this all his life. His ENTIRE life.

Thanks for the American Thinker article. Good stuff.

What star (of first magnitude) will step up to a benefit concert for the children?

Or take a few of them into their own neighborhoods, their own homes.

You know, there is always someone who brings up our “open immigration” from the past (think Irish immigrants, Europeans, etc.). But they always, ALWAYS, forget to put in that they CAME THROUGH a conduit center AND WERE QUARANTINED, then registered and logged as immigrants IN A METHODICAL, ORDERLY MANNER.

There was a REASON for that. Order. The rule of law. Protecting the CITIZENS and LEGAL immigrants from disease and other threats (can you say MS 13?!). Tracking their impact (good or bad) on the nation as a whole.

This INVASION is disgusting. The poor children are victims. But this is no “refugee” problem. This is Cloward/Piven being INTENTIONALLY, METHODICALLY inflicted on this nation by fascist or Marxist ideologues who HATE this country and are FUNDAMENTALLY TRANSFORMING IT before our very eyes!!

Those who did this to us, to these well-prepped (have you seen the cheat sheets?!) but (mostly) ignorant and innocent children, deserve to be CRIMINALLY PROSECUTED. Obama and Eric Holder are both tied for #1 on the “most wanted” list for this CRIME!

Yeah, I’m yelling. So sick of Obama. And the Republican and Democrat elites who ALLOW this [email protected] to happen!!!

Enforce our laws or RESIGN!!! Why don’t people GET THIS?!?!

He’s shameless and he’s not going to resign. And in any event, he’s lazy and not that sharp, I think. The best thing we can do is force Holder out.

The president of Mexico was in the U.S. a few years ago and was interviewed on CNN. During the interview, he was asked if he would be in favor of open borders for Mexico. He said no, of course not. It is the duty of the Mexican government to screen would-be immigrants, to ensure that they will be capable of supporting themselves, to check for diseases, and to verify that they are not criminals, among other things. To not do so would be an abdication of the government’s responsibility to its own citizens.

Of course, he was also demanding that the U.S. grant amnesty to the millions of Mexicans and other illegal aliens who have invaded the U.S. in violation of our immigration laws.

Shockingly (not), the parts of his interview that got the most re-play were the parts where he was demanding amnesty, and not the part where he was explaining how it is the fundamental duty of any government to enforce its borders and control immigration.

Illegals have been transporting diseases into this country for as long as they have been entering illegally. This has been known for decades. It is more important for the dems to have a permanent, reliable voting base than to protect the public. Wait till the terrorists, who have been entering, to set up their bomb making shops and hitting a bunch of soft targets. The politicians would like nothing better than to have martial law as well. They are simply waiting for the public to demand total tyranny.

Well, if we’re going to have this fight … better sooner than later. We need a million man march of our own … that spills over onto the White House lawn. Want martial law? Bring it on, baby.

I don’t understand how (most) Democrats seem to want to extend Constitutional rights to every person around the globe EXCEPT law-abiding, tax-paying legal American citizens.

The SCOTUS thought it was a good idea as well.