Feel good story of the D-Day

Feel good story of the D-Day 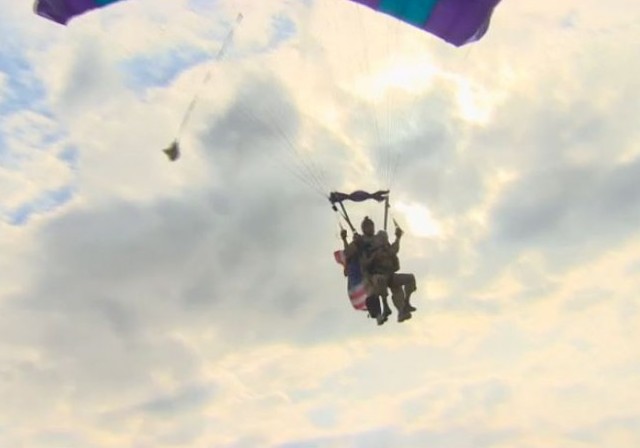 Jim “Pee Wee” Martin acted like he’d been here before, like jumping from a plane is as easy as falling off a log.
Maybe that’s because he had — 70 years ago.

“I’m feeling fine,” Martin told reporters moments after landing in a French field. “… It was wonderful, absolutely wonderful.”
Martin was part of the U.S. 101st Airborne Division that parachuted down over Utah Beach in their bid to retake France and, eventually, the rest of Europe from Nazi Germany. They actually touched down in enemy-controlled territory a night before what’s referred to as D-Day.

His jump Thursday in the same area was different and — despite his being 93 years old now — a whole lot easier.

“It didn’t (compare),” Martin said, “because there wasn’t anybody shooting at me today.”

“It was wonderful, absolutely wonderful.”

Yes, Pee Wee. It was. Wonderful.

I can’t imagine parachuting into the range of enemy fire with no way to take cover.

Better story – This guy was contacted by WH about meeting up with Obama over there (photo op ploy). His response? Ehhhh, no thanks. He pegged his refusal directly to opposition to Obama’s policies.

There’s another WWII vet, now 89 yrs old, living in an assisted living home, the staff of whcih denied his request to go to Normandy. He said, “f**k that”, snuck out and went anyway. LOL.

Here’s the 89 yr old Brit WWII vet who snuck out of old folks home to go to Normandy: