Does not appear to be Pallywood

Does not appear to be Pallywood 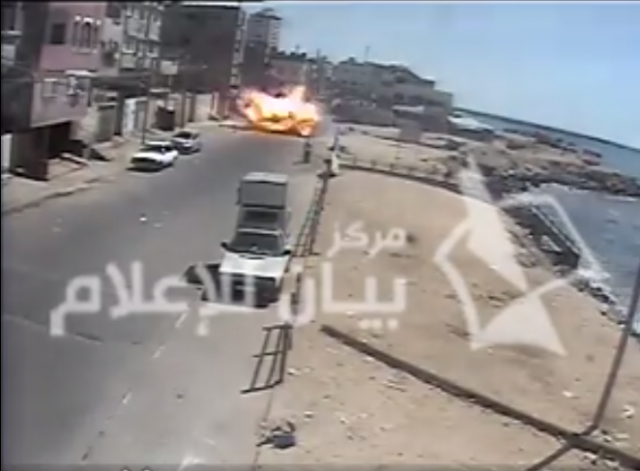 This video does not appear to be a Pallywood production.

Unverified footage posted to YouTube on Saturday appears to show the Israeli air strike carried out Friday afternoon on a car carrying two operatives belonging to the Popular Resistance Committees, a coalition of armed groups in Gaza.

The footage shows a vehicle driving along a coastal road before being struck. Passersby remain seemingly unharmed.

Israel confirmed carrying out the targeted killing of Osama Has​sumi, 29, and Mohammad Fatzih, 24, on Friday, charging that they were involved in a cell responsible for repeated rocket fire on Israel’s southern cities over the past several weeks and were planning terror attacks on Israeli civilians.

People, this is important, if you watch the video you can clearly see that this car drives by a civilian (right side near the bridge), also it passes by bunch of parked cars.

Only IDF/IAF pays attention to such things, we all know how NATO drones in Afganistan/Pakistan can kill hundreds of civilians just to kill one two Taliban terrorists, Israel always tries to minimize the unnecessary casualties.﻿

Pallywood or not? One never can be certain, but I’m voting not.

That explosion looks too small to be an aerial bomb and is more likely from a bomb inside the car. Could be Israeli, could be internecine.

If it were internecine, the explosion would have been much larger and would have left a whole in the ground where the car used to be. In that part of the world, “internecine” bombings are as much to “send a message” as they are to take out a rival. They want a really big boom.

1. We need to see a very slow motion view showing a munition hitting the car from above. Otherwise, it could easily be a (still Israeli) car bombing.

2. The comment about the visual respecting the scruples of the IDF is aspirational, at best, if this was an aerial strike. When you drop one of these things, you MIGHT try to time it just right to prevent collateral damage, but it will hit when it hits. They don’t have a “hover mode”. Plus, the flaming wreak could take out a family on the sidewalk down range. Too many variables to pretend anything like this is really “surgical”.

The IAF stopped using American Hellfire missiles for these types of missions because of the excessive collateral damage. They have, for some years now, been using missiles with much smaller explosive charges that result in just the sort of damage you see here: the actual target is destroyed with little or no collateral damage. It almost certainly was a missile launched from a hovering helicopter some distance away.

If it was a munition dropped/fired from above, we need to see some evidence of that.

When you launch any munition that is guided, you track your target. If the car in this case had stopped beside the pedestrian…oh, well…

If it was a car bomb, you actually have MORE control/options as to when it does what it does.

Getting close enough to the notoriously paranoid Hamas leadership to plant a bomb in one of their cars, and knowing beforehand which one they are going to use, would be a far more complex and risky operation than a downsized air-to-surface missile.

Occam’s Razor and all that.

it happens several times each year. By one outfit or another.

Just because they often know the movements of these people doesn’t mean they can get close enough to plant a bomb on their car and not get caught eventually. There is far too much risk in that – imagine what would happen to an Israeli agent if they got their hands on him. Merely being suspected of giving the “Zionist enemy” information is enough for gruesome public execution. It’s much easier to strike from above, something they have been doing very effectively, for years.

Please go to the IDF channel and you will see examples of the drone holding off until they get a clear shot, with less chance of collateral damage. This really is policy. Not that everyone is happy about it.

Carbomb, not any kind of military ordnance. The primary explosion came from withing the vehicle.

Carbomb, not any kind of military ordnance. The primary explosion came from withing the vehicle.

A small missile penetrates the roof and explodes inside. You do know most missile ordnance is designed to do just that, right?

Downvote me all you want it was not a guided munition.

Anything traveling fast enough to not be visible in that field and at that frame rate would have disrupted the vehicle frame to the point where it would not be a rolling wreck.

The blast from such a device would have been directed downward through the floorboard and appeared as a fireball from under the vehicle.

That was a small device hidden in or under the driver’s seat.

That is a pretty low-resolution video and just because you didn’t see a missile doesn’t mean there wasn’t one.

Don’t assume the Israelis are using very high-velocity anti-armored vehicle weapons like a Hellfire. They’re not. What they have been using for years are much smaller and do not need to penetrate all the way through to the ground and blow a massive hole in the road.

Pedestrian is diddy-boppin’ along, like he’s on his way to get a goat cheese smoothie or see Falima, and then the Hand of God reaches down and obliterates a passing car. “Eff this!” he says. “I’ll go back home and play some E-Box. But I won’t run.”

No, don’t run. Whoever dropped Death on those two cats might think a running dude is somehow not acting right. No. Walk away. Memo to self: ‘Check your skivvies when you get home.’

LOL. He sure did seem to be suddenly fascinated with checking out the shoreline; then, abruptly recalled an appointment he had – in the opposite direction from where he’d been walking.

If it had been Pallywood, there would be lots of “dead and wounded civilians” who appear to, miraculously, start getting up and walking away a split-second before the video stops.

The US has a larger decision loop?

The US strikes I’ve seen never seem to hit the target, but to strike off to the left of the camera. Could be just the half dozen or so I’ve seen. There is also a small puff of dust a half second before the explosion, not the same location as the explosion. Never have figured that out.

This is the dumbest thing I have read today, and I was on the Huffington Post earlier!

1.) If this was a missile, it must have taken a bit of time to reach the target, there was no telling if the target would stop right by that walking civilian or not. How likely is it that if the car had stopped, Israel would have somehow prevented the missile from striking the car?

2.) This isn’t Grand Theft Auto, cars do not tend to blow up in “chain reactions”, especially from such a small explosion as seen in the video.

Well, then if they were wrong, the missile would hit the ground. The fact is they (we) do take these things into account, moreso than any military on earth, certainly more than NATO in Bosnia.

There are people in Israel who are not happy about the policy.

I was referring to the civilian. Your second comment is likely on the money.

What do they hope to gain by posting this? If the missile has accidentally hit a child (as one of their own did recently) (*) then they would be quite happy, and have an “atrocity” to claim. But getting an actual target would seem to make them look bad.

(*) The missile fell short and hit one of their own children. Thus it was a “misfire”. If had hit an Israeli child, it would have been a successful hit.

I love the smell of burning terrorists in the morning.((-:

Who knows the real story? Maybe the story put out is a fake story designed to cover over how the good guys actually did this.

Whatever the method, there are now two less bad guys to worry about.

Praise God for blessing that mission.

Yes! I don’t care who did it, there is a little less evil in the world today.