With air travel, can it spread? 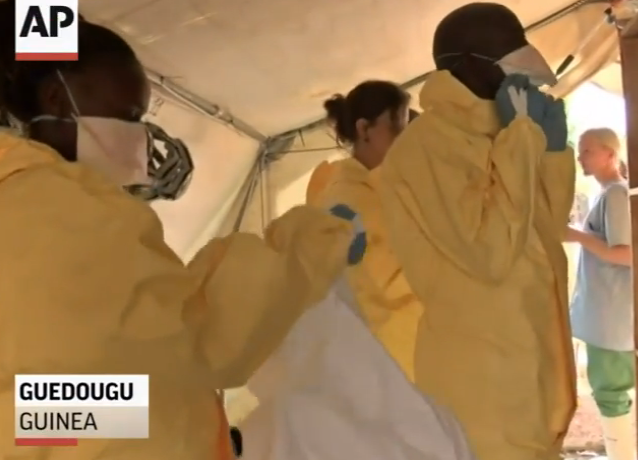 The international volunteer medical organization Doctors Without Borders has issued a chilling warning — that the deadly Ebola virus is “totally out of control.”

The Ebola virus spreads through direct contact with infected people and causes internal bleeding and organ failure. There is no cure or vaccine so infected patients must be quarantined to stop the rapid spread of the virus. According to the World Health Organization, an Ebola outbreak can result in over 90% fatality rates.

Bart Janssens, director of operations for Doctors Without Borders, said Friday that the international community must send in more resources to stop the current Ebola epidemic.

“The reality is clear that the epidemic is now in a second wave,” Janssens said. “And, for me, it is totally out of control.”

The outbreak has caused more deaths than any other of the disease, said another official with the medical charity. Ebola has been linked to more than 330 deaths in Guinea, Sierra Leone and Liberia, according to the World Health Organization.

The current outbreak, which began in Guinea either late last year or early this year, had appeared to slow before picking up pace again in recent weeks, including spreading to the Liberian capital for the first time.

“This is the highest outbreak on record and has the highest number of deaths, so this is unprecedented so far,” said Armand Sprecher, a public health specialist with Doctors Without Borders.

Doctors Without Borders’ Sprecher says he fears this time the outbreak will become “a regional health issue” that will not go away.

In April of this year, there was a scare in Canada when a man traveling from West Africa expressed symptoms of Ebola. The man’s test results were negative.

Clearly international public health officials are on edge and keeping an eye on the West African Ebola outbreak for signs it has traveled to a new part of the world.

The international community must send in more resources to stop the current Ebola epidemic.

I hate to sound heartless, but Why? How many tens of billions have U.S. taxpayers spent shopping condoms to Africa to stop the “AIDS epidemic”? So now we’re supposed to cough up more money to pour down that rat hole?

Big Pharma could probably find a cure or a treatment, but why would they, knowing that they won’t be paid for their work? Why doesn’t an African doctor find a cure, eh?

Contagions anywhere are an American concern because they are difficult to keep out of the country. The Feds have several organizations which monitor human and animal diseases in the US, and which prevent diseases from being carried into the country by imported animals or by human visitors, tourists, or immigrants. Or, at least, they did. This system can no longer function very well as the Feds are not making any serious attempt to control, examine, or even document “immigrants” – they can flow in unimpeded, diseased or not. The alternative is to try to control these diseases, either after they appear in the US, or outside the US before they get a foothold here. Hence, the concern about Africa.

Contagions anywhere are an American concern…

The biggest contagion in Africa is socialism. To the best of my knowledge, ALL African countries are socialist. That’s why they have to go begging to capitalist countries when they suffer the inevitable results of their chosen form of government. What is America doing about the epidemic of socialism in Africa?

I agree that America should be concerned about bringing diseases into the Country, but why have we just opened our Southern border to all comers, diseased or not?

Diseases don’t respect borders. That’s why we have to do the best we can to fight diseases in foreign countries before they get a running start.

The best way to fight diseases are not feasible due to crooked politicians. Find a way to get rid of such politicians (and I include the Moslem Imams, etc) and the diseases will be easy to defeat.

Good luck figuring out how to dump them.

For whomever down-dinged me, I see you are a follower of Karl Marx who advocated:

I’m more a follower of Ragnar Danneskjöld myself.

I am your 3rd down-ding for both comments. You are ignorant to the national security threat here. This has nothing to do with military policing and socializing the world and everything to do with protecting your ignorant butt from catching the disease as it spreads into a pandemic.

Ebola is very dangerous as a global killer because there are strains with the ability to survive within a vector for 21 days. Combine that with a 90%+ fatality rate and a high transmission rate and you have a global killer….skin-to-skin contact is even considered a mode of transmission for some strains.

You are ignorant to the national security threat here.

Have you considered that bankrupting the Country by sending money borrowed from China to third world countries might be our greatest “national security threat”?

The Doctors Without Borders must close the Borders.

Our White House leaders would declare such a quarantine illegal and allow the diseased people into our country – and ship them to places like Arizona, Texas etc.

I can’t wait untli it gets into that unclean shithole we call ‘Central America’, and from there to the USA within a month or less, via thousands of kids we’re supposed to adopt and raise.

Nothing good comes out of Africa … I mean look, it gave us 0bama.

Shut down the airports. Those there, stay.

Slate wipers like Ebola need to be dealt with by strict quarantine and closing borders. Luckily it tends to burn out rather quickly (depending on the strain) because the mortality rate is so high and it’s not easy to catch without close contact.

Our PC culture and fear of being called bigots enabled AIDS to spread coast to coast with little resistance. We should learn from history and never make that mistake again.

The problem is the strain that doesn’t burn out quickly, of which there are known varieties.

When a strain mutates to delay consistently prolong incubation producing asymptomatic vectors, we are all in trouble.

Which is why you need to enforce strict quarantine procedures.