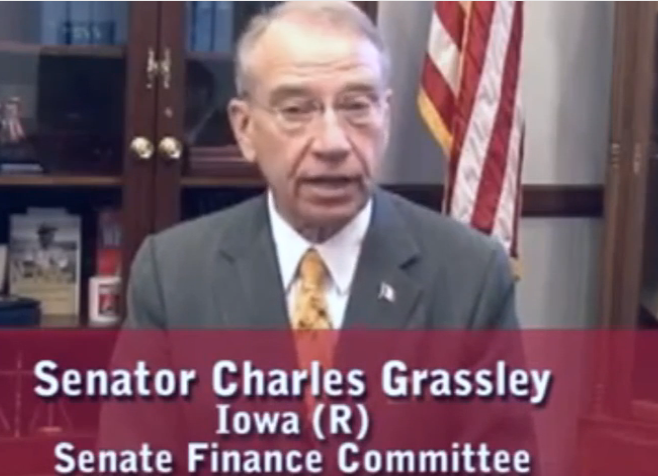 The House Ways and Means Committee has released the email chain that details Lerner’s eagerness to target a sitting U.S. Senator with an IRS audit because she received an invitation he was attending.

Somewhat surprisingly, the Associated Press has picked up the story quickly.

The event organizer apparently offered to pay for Grassley’s wife to attend the event. In an email to another IRS official, Lerner suggests referring Grassley for an audit, saying it might be inappropriate for the group to pay for his wife.

The other IRS official waives her off, saying an audit would be premature.

No surprise, but not a smoking gun.

This woman is as sleazy as they get.

Not A Member of Any Organized Political in reply to JackRussellTerrierist. | June 25, 2014 at 9:32 pm

Evidently more has spilled out since the posting of this post?

I meant it wasn’t a smoking gun with regard to the issue before the House as to Lerner.

Don’t let them divert your attention from the real issue. This was the proverbial throwing a dog a bone to shut it up.

It does show she also used a BlackBerry.

True. But surely THAT Blackberry can no longer be found.

They’d never have taken their cover up to these lengths just to let it all go for naught over the discovery of a five year-old Blackberry. Uh-uh. Ain’t gonna happen.

Her tactic is ‘throw a dog a hard drive’.

Well, if Lerner threw it to my little Jack Russell, she’d hang onto it for all she’s worth and there she’d be on our doorstep – tail wagging, bright, excited eyes, proud of her little self, as I would be of her. I would then have my expert tech neighbor (conservative) fire it up and we’d be off to the races with it!

I vaguely recall that the Kennedy-era IRS was harassing Nixon with bogus audits when he was a senator.

Maybe not; Kennedy wasn’t President yet when Nixon was in the senate.

The evil is strong is this one.

What’s the point in the oath to the Constitution which all officers of the United States, and Lerner was an officer, are required to take.

Something about John Adams and our government being made only for a moral people.

The IRS threatening a senator, well that’s the dog biting the hand that feeds it. You could actually get empathy from democrats as they don’t want their dogs attacking the ruling class. This would be like the Military considering a drone strike against a dem senator because he went on al jazzeria.

I want Lerner to be a target also … for a firing squad. Ready, aim, fire!

….. This is nothing. Are they feeding little tidbits in attempt to distract from the REAL crimes that have been committed?

Keep digging. This is a pellet. Not the motherlode.

Bruce, it’s no surprise the AP jumped on the story. They’re doing Lerner and obamullah a favor by making noise about it. It’s a diversion from the real IRS issue before the House committee.

[…] end to the senior-level chicanery, before this matter really gets out of hand. These folks are beyond Watergate.  And, if you’re OK with all of this, I fear for future of […]

The event organizer apparently offered to pay for Grassley’s wife to attend the event. In an email to another IRS official, Lerner suggests referring Grassley for an audit, saying it might be inappropriate for the group to pay for his wife.”

This is just…surreal. A mistakenly sent invitation leads to an IRS audit. Has anyone else seen the movie ‘Brazil’?

In a way, it’s a shame they didn’t audit Grassley. They’d have been left with egg on their faces. He’s the one man in Washington who could survive and IRS audit.

prof- you’ve got to link to the video over at poor Richard’s news. My jaw dropped on this one. If it were a GOP’er making these statements it would be on endless loop on MSM. (true of a lot of stuff, but this one AMAZING).