Clintons Back Estate Taxes, Except When They’re Avoiding Them

Clintons Back Estate Taxes, Except When They’re Avoiding Them 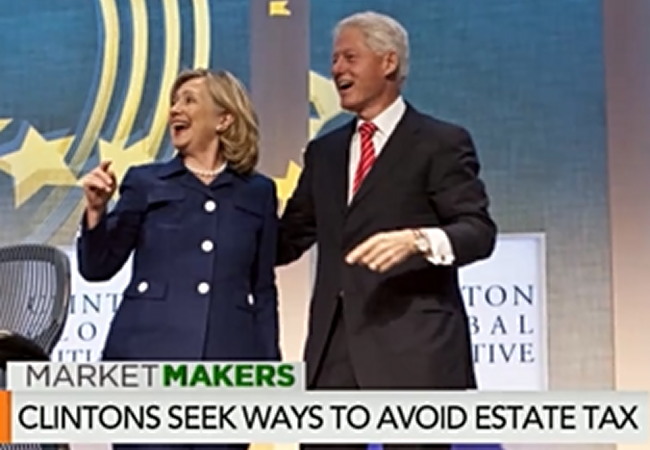 In a classic case of liberal double standards, Bill and Hillary Clinton are enjoying the use of the very tax loopholes they want to end for average Americans.

Wealthy Clintons Use Trusts to Limit Estate Tax They Back

Bill and Hillary Clinton have long supported an estate tax to prevent the U.S. from being dominated by inherited wealth. That doesn’t mean they want to pay it.

To reduce the tax pinch, the Clintons are using financial planning strategies befitting the top 1 percent of U.S. households in wealth. These moves, common among multimillionaires, will help shield some of their estate from the tax that now tops out at 40 percent of assets upon death.

The Clintons created residence trusts in 2010 and shifted ownership of their New York house into them in 2011, according to federal financial disclosures and local property records.

It seems as though Mrs. Clinton’s comfort level with being fabulously wealthy is on the rise, even as average Americans’ incomes declined during the recession, then flat-lined. Maybe “massive inherited wealth” isn’t such a bad thing after all…if the beneficiaries are uniquely worthy, that is. Like, say, Chelsea and family.

Even the left leftist gossip site Gawker can’t provide cover on this subject:

America has treated the Clinton family pretty well. They’ve become millionaires many times over. But a new report says that even as they support policies to tax the estates of the extreme wealthy, they try to avoid those taxes on their own wealth.

Democrats have made it quite clear that they intend to make income inequality part of their platform in 2014 and 2016. Will all Americans be allowed to take advantage of the same wealth building policies that have benefited the Clinton family?

This is what Collectivist elites do.

AND assure quietly that the loop-holes and exemptions they need are there when they need them.

And the end result is that nothing changes for the wealthy, despite how publicly vocal they were when supporting this “change.” The middle class, however, continues to be gutted.

Any loop-holes the Clintons create for themselves are available to all other wealthy Americans, while the middle class – who can’t afford to set up trusts to limit their tax exposure – feel the full force of the estate tax that was sold as being aimed at the ultra-wealthy.

[snark] But those Clintons sure looked good when they were “supporting the middle class” and forcing the wealthy to pay their “fair share,” didn’t they? [/snark]

The Clintons, like the Kennedys (who used trusts and off-shore accounts to shield their wealth from taxes) and the John F. Kerrys (who dock their yacht in another state to avoid taxes), love taxes.

For everybody else. Not for themselves.

Anybody with a lick of sense, wealthy or not, would set up a living trust to prevent the erosion of inheritance due to death taxes and to avoid the whole lengthy probate process.

The problem with the Democrats is that they’re greedy bastards who try to evade the heavy taxes they like to subject us to. It’s good to see Hillary and Bill called out on this.

This hypocrisy should be trotted out against WHOEVER the Democrats put up for POTUS in 2016. Directly, of course, it applies to Hillary. But to Lizzie Warren it also applies.

The perfect response to “redistribution” and “wealth inequality”: YOU FIRST. GIVE UP ALL YOUR WEALTH, AND THEN WE WILL CONSIDER YOU SERIOUS IN YOUR SO-CALLED DESIRE FOR “INCOME EQUALITY.” LEAD BY EXAMPLE.

Prefacing this response with a short-list of how you charge speaking fees that PER SPEECH get more than DOUBLE the average annual income, avoid taxes, etc……or follow that response with these facts! Make sure to explain that EQUALITY of INCOME means LOWERING EVERYONE ELSE’S – that people like YOU are always “exempt” somehow.

Either way, the Republican needs to EXPOSE these HYPOCRITES!!!

Can you tell I’m fed up, sick of the ignorance and misinformation, they hypocrisy?!

(And, although putting up a Romney-type against this hypocrisy makes for an apparently easy retort “You’re rich – who are you to talk?!”… the best reply to THAT attempt at turnabout is – “But I’m not the one calling on people to “eat the rich” and “redistribute wealth” for “income equality” – I stand for and promise free markets so EVERYONE can pursue the American dream to BECOME AS RICH AS YOU, OR maybe even RICHER than you.”)

I can’t begrudge the fact that their financial advisers are doing what they are paid to do. What I can’t understand s what is it these people have to sell that makes them so wealthy.

“Wealthy Clintons Use Trusts to Limit Estate Tax They Back”

Just another one of those Hard Choices having to be made.

plenty of apologists commentating in that gawker article.
sad..

I’d be surprised to find a wealthy leftist who does not try to avoid or minimize the taxes that he or she wants imposed on others.