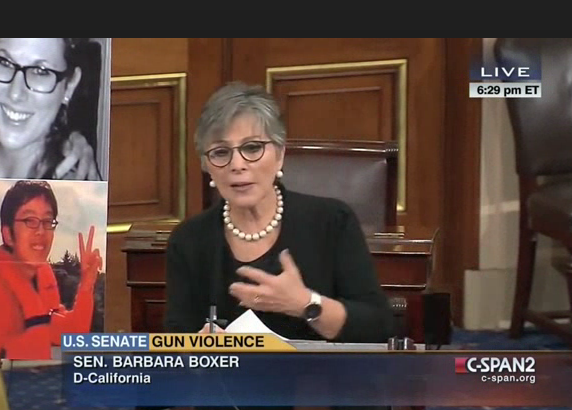 Despite the fact that when half-Asian Elliot Rodger went on his murder spree, he knifed three of his victims to death, the response of progressives has been primarily focused on two topics: “White Male Privilege” and “Gun Control”.

Legislation to outlaw either being white or male cannot be proposed…yet.  However, one of the most progressively activist of all of California’s elected representatives offers a new set of gun control rules: The “Pause for Safety Act”.

Fascinating, I think, that “gun” does not appear in the title of Senator Barbara Boxer’s latest masterpiece. Her proposed rules would do the following:

• One, it would help ensure that families and others can go to court and seek a gun violence prevention order to temporarily stop someone close to them who poses a danger to themselves or others from purchasing a firearm.

• Two, it would help ensure that families and others can also seek a gun violence prevention warrant that would allow law enforcement to take temporary possession of firearms that have already been purchased if a court determines that the individual poses a threat to themselves or others.

• Three, it would help ensure that law enforcement makes full use of all existing gun registries when assessing a tip, warning or request from a concerned family member or other close associate.

According to Boxer: “We have a function here not to allow someone who is unstable or violent to get a weapon.”

So, how would this legislation have prevented Rodger from gaining access to knives? And, by the logic that produced this chestnut, perhaps we should regulate the distribution of hot coffee?:

July 2011: Rodger splashes coffee and tea on two couples during a jealous rage in separate incidents in July of his first summer in Isla Vista, according to his writing. He became “livid with envious hatred” at the sight of a young couple “kissing passionately” at a Starbucks, he wrote.

In addition to guns and knives, the report linked above also indicates that Rodger used his vehicle as a weapon:

He fired his guns through the driver’s side window parallel to the sidewalk as he drove his vehicle down the wrong side of the road, the sheriff said. He shot at a woman before a sheriff’s deputy fired at him. His car struck and injured a bicyclist before Rodger shot four pedestrians, the sheriff said.

Maybe we should tack on a car violence prevention warrant?

Even if the court grants a family’s request to deny a relative the right to purchase or have possession of a weapon, when do madmen follow rules? With enough money and motivation, a person intent on obtaining a gun will eventually find a way to procure one.

Let’s look at the local police force’s assessment of Rodger, which is related to the third item on Boxer’s wish list and occurred shortly before the rampage.

….When Sheriff’s deputies arrived at Rodger’s address, they contacted him outside of his residence. Deputies found Rodger to be shy, timid and polite. When questioned by the deputies about reported disturbing videos he had posted on-line, Rodger told them he was having trouble fitting in socially in Isla Vista and the videos were merely a way of expressing himself. Based upon the information available to them at the time, Sheriff’s deputies concluded that Rodger was not an immediate threat to himself or others, and that they did not have cause to place him on an involuntary mental health hold, or to enter or search his residence. Therefore, they did not view the videos or conduct a weapons check on Rodger.

Perhaps instead of using “gun registries”, rules to permit a 72-hour mental evaluation hold for a family member would be a better solution, if agreed to by a court? Whereas someone like Rodger could keep it together for a 30-minute friendly interview with authorities, it would be more of a challenge to fake sanity during an intense 3 days with a court-designated psychiatrist while the professional also evaluated the entire content of a patient’s social medial collection.

In the wake of the slaughter of the 20 children and 6 staff members at the Sandy Hook Elementary School at the hands of another mentally ill individual, over 1500 state gun bills were proposed. For example, one California bill that passed in this flurry of activity required psychotherapists whose patients threaten violence to report the threats. As Rodger’s case shows, simple reporting (by the parents in this instance) did not prevent the young man from killing.

None of those new rules helped prevent the UCSB slayings. And it is unlikely Boxer’s new proposals, offered with earnest sincerity and good intentions, will prevent a similar incident from occurring in the future.

Good intentions? For whom? Boxer, like all politicians, must be seen as doing something, anything, when faced with a crisis. The road to hell is paved with good intentions… And Boxer has no plans to go on a road trip, that leaves the leaves the rest of us.

Of course she has good intentions. For herself and her political allies.

A gun violence protection order???? Something like a restraining order but more useless. Try that in any big city and see how well it works against illegal guns used by street thugs. That piece of paper will work really well to cover the corpse.

Once again, Babs proves she deserved to inherit the title “America’s Dumbest Senator” after Joe Biden quit to run for VP.

I want to get a Boxer stupidity prevention warrant, not allow her into public again until a court rules that she’s not a threat to herself or others.

I’m just wondering who the “and others” mentioned in the proposed rules might be.

Guess who will decide who is crazy?

This is another Xanax fueled massacre. His parents say he was on it, even fear he was addicted.

The liberals just can’t come to grips with the reality that their in-your-face political propaganda fostered the environment where this tragedy occurred.

He wasn’t anti-liberal…in fact, he was quite liberal. However, he seemed to be spiraling out of control losing sanity as he waded through that muck of a UC system that is the liberal bastion of America. Am I excusing his behavior you ask? No, quite the opposite…I’m using the liberal tactic of assigning blame to everyone and everything on the dart board except the bulls eye (see liberal discussions of the slender man stabbing and how horrid it is to try two 1st degree murderers as adults for an example of what I mean).

it would be more of a challenge to fake sanity during an intense 3 days with a court-designated psychiatrist while the professional also evaluated the entire content of a patient’s social medial collection.

Sorry, I can’t see this as preferable to the Boxer Remedy.

In this case, law enforcement looked at the problem, and the men on the spot decided that there was no real justification for further action at that time. It’s hard to demand much more of them than that. One might argue that instead of sending law enforcement to do the evaluating, officialdom should have sent a psychiatrist. He might have come to a different conclusion. And that might be worth doing. I can see the TV shows now – “Housecalls with Dr. SWAT”.

But that’s a long way from confinement for three days of abuse on mere suspicion of a crime which hasn’t even been committed. That would strike me as far worse than anything Boxer, totalitarian moron though she is, has yet proposed.