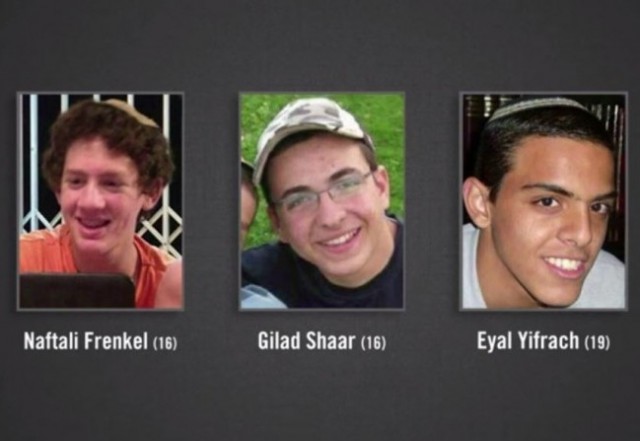 The bodies of the three Israeli teenagers kidnapped two weeks — Gil-ad Shaar, Eyal Yifrach and Naftali Fraenkel — have been located by the IDF near Hebron. Details as to how and when they were killed have not been made public yet.

News reports and rumors circulated for hours, but we waited until official confirmation, this tweet being from the Prime Minister’s Arab Media spokesman:

RT @ofirgendelman: ISA and IDF: The bodies of the 3 kidnapped teens were found near Hebron

[Note – the original of Ofir Gendelman’s tweet above has been deleted, not sure why]

Israeli troops on Monday discovered the bodies of three Israeli teenagers, who were kidnapped on June 12, north of Hebron in the West Bank.

The bodies were found in an area between Halhul and Karmei Tzur on Monday afternoon. Israeli security forces, which had been conducting extensive searches in the area, sealed off the area and declared it a closed military zone.

Buzzfeed reports that the teens likely were shot during the kidnapping:

BuzzFeed spoke to an Israeli official involved in the case, who confirmed that during the police call a gunshot can clearly be heard. The car, he added, had clear evidence of foul play. Over the last week. Israeli soldiers could be seen digging through rocks and dredging wells in Hebron in the search for the teens.

“We have been operating, for some time now, with evidence that these boys were killed,” he said. “It is with a heavy heart that we realized we were looking for bodies.”

An Israeli army officer, who spoke to BuzzFeed by phone from the Hebron area, said that an autopsy had not yet been conducted. He said that the bodies of three teens had been found shot, likely very close to the time of their abduction.

This post will be updated as additional details are released. There are plenty of alleged facts and photos circulating on Twitter and Facebook — we’re going to stick with official and/or confirmed news reports.

IDF's Peter Lerner: "They were under a pile of rocks in an open field" between Halhul-Beit Kahil

Tel Aviv mourns. Unbelievable to see the unity in this country during hard times. pic.twitter.com/pSvh1rTCX3

PM at the Cabinet meeting: With heavy grief we found 3 bodies. All signs indicate they are of our abducted youths Eyal, Gilad and Naftali.

They were abducted & murdered in cold blood by human animals. On behalf of the entire Jewish People, I would like to tell the dear families-

They were abducted & murdered in cold blood by human animals. On behalf of the entire Jewish People, I would like to tell the dear families-

the mothers, fathers, grandmothers and grandfathers, and brothers and sisters – we are deeply saddened, the entire nation weeps with you.

way home to their parents who will not see them anymore. Hamas is responsible and Hamas will pay. May the memories of the 3 boys be blessed.

May Gold bless and protect the souls of these three young men, and escort them safely to paradise. And may He comfort their grieving family members, and surround them with His light and love.

I can just see the bumper sticker on the car of that “mother” proud of her son for kidnapping (and now, murdering) the three boys.

“My Son Was Terrorist of the Month at West Bank Savagery School.”

My heart goes out to the families of the three boys.

Wasn’t one of them a U.S. citizen?

If so, expect Obama to condemn the violence committed by “both sides” any second now…

Another sad day for Israel, another act of brutal provocation from the idolaters who bow down towards Mecca.

By Day 3 I figured they were lying in a ditch – that’s the way Arabs do things. Israel should execute 50 prisoners.

Israel must now identify the murderers, identify the country(ies) supporting them, and respond with unrestrained military brutality and maximum body count. Then dare obama to criticize the action.

Appropriate response to this and the 20 rockets fired this week:

Remove the illegal Arab occupiers of West Bank and Gaza.

Palestinians or West Bankians attacked IDF while they were trying to remove the bodies:
http://israelmatzav.blogspot.com/2014/06/surreal-palestinians-attack-idf-humvee.html

my first reaction, if I were Israel, is the reoccupation of the Temple Mount. Removing the Waqf would send a clear and strong message. after that I would warn Hamas that for every day the people responsible are not brought forth to justice, one Hamas controlled city will be leveled. Obama will yell and scream for moderation. But with his approval ratings in the 30s no one will need to heed a word he says.

It’s really far past the time to take the gloves off.

Rest in Peace, lads. My thoughts and prayers for their families and friends.

It is time the United States said “NO MORE” to subsidizing these barbarians. Cut off the PA until all their component organizations renounce terrorism and murder and kidnapping as political tools and show that they mean it.

Let’s see what hash tag Mooseshell will display after Bibi does what needs to be done–and he shouldn’t worry about disproportionate response even entering into the equation.
Level Hamas.

“We will not stop until Hamas is completely destroyed,” Israel’s Deputy Defense Minister Dannon Danon said after the meeting, according to CNN.”

Yeah, cause being “stable” in a terror zone is just such a great idea.

They did it because they felt they were being outmedia-ed by ISIS . They need this lifeline. of publicity . Who really gives a crap. about them? Noone .

Just once I’d like to see the Israelis update Napolean’s old axiom and substitute “Hamas” for “Vienna.”