Did they not read what was in the bill? Or is it just an excuse? 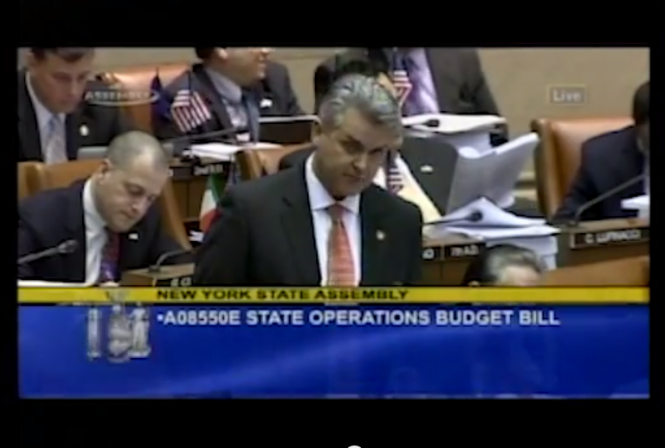 Republican lawmakers created quite a stir earlier this week, when they complained to the New York Post that the recently passed budget contained secret funding for the SAFE Act.

Two senators who wished to remain anonymous, told the Post that funds tagged for certain aspects of the SAFE Act were ‘hidden’ in the budget, and that they never would have voted in favor had they known. Meanwhile, several unnamed Assembly GOP lawmakers claimed that they had only found out about the funding at a state budget briefing.

There’s only three options here – they’re either lying, flat-out admitting that they didn’t review the budget prior to voting, or are trying to cover their ‘yes’ vote by alleging they didn’t know what was in the budget.

Numerous Republicans who had actually put their name on it, were openly debating SAFE Act funding in this year’s budget.  Even a normally obedient media was pointing it out well in advance of budget debates.

Via LoHud on February 7th, nearly two months before the budget passed:

Gov. Andrew Cuomo’s $137.2 billion budget proposal includes an additional $3.2 million for personnel costs related to the SAFE Act, according to the head of the state police.

Superintendent Joseph D’Amico told lawmakers at a budget hearing this week that the money will go toward hiring civilian employees to help with administrative duties related to the gun laws, including the processing of assault-weapon registrations and maintaining records.

This is also a bad budget proposal for those who support the Second Amendment of our Constitution, as $3.2 million is devoted to implementing the SAFE Act, and a proposal to legalize crossbows for hunting purposes that the governor included in his budget was omitted here.

Early on March 31st, Politics on the Hudson reiterated D’Amico’s statements that this year’s budget contained a provision to allocate $3.2 million to the SAFE Act, but also reminded lawmakers that nearly $28 million had been allocated for the implementation of a database and technology to support the state’s gun-control law last year, with $7 million having already been spent.  The budget would eventually be voted on at least 10 hours after this portion of the debate.

Republican Assemblyman Steve McLaughlin took to his Facebook page that same day to explain to his constituents that he would be voting ‘no’ on the budget, in part specifically because it contained funding for the SAFE Act.

In speaking with McLaughlin about the latest GOP claims that the funding was hidden he said, “I certainly knew it was in there and debated it.”

Here is video of the Assemblyman debating the budget and saying ‘no’ to all SAFE Act funding:

McLaughlin added, “They’re trying to say that they didn’t see it but after last year and how it was hidden how could anyone not ask the question?”

Even after the budget had passed, but still well before these new claims of ‘hidden’ funding, others were still sounding the alarm about money being allocated for a state gun database.

Via the Adirondack Daily Enterprise on April 11th:

Assemblyman Dan Stec is warning against a provision in the state budget which would fund a state database for gun records, required by last year’s Secure Ammunition and Firearms Enforcement Act.

Stec, a Republican from Queensbury, objects to a $3.2 million allocation in the budget to implement the database. That line item falls within a provision that gives state police $88.9 million for technical police service programs. The state gave $27.7 million for a SAFE Act database last year, according to news reports.

Yet somehow, it took until early May before certain anonymous GOP lawmakers realized they had been duped to vote for SAFE Act funding?

“There is a reason the Senator quoted by the Post wants to remain anonymous,” King said. “Their statement is an easily provable falsehood. This is classic Albany politics: Tell their constituents one thing and do the exact opposite in the legislature and hope nobody notices the difference.”

It’s time for these lawmakers to come clean.  You were duped into using a tragedy and a ‘message of necessity’ to help pass the SAFE Act in the first place.  You were duped into providing nearly $28 million in funding toward its implementation last year.  And this year you want us to believe you were completely blindsided again?

You’re either lying, didn’t read the bill, or are covering your backside with double talk.

So, NYers are expected to embrace “we had to pass to bill to discover what’s in it”? Does the NY GOP really expect people to believe their idiocy? They wanted to fund the anti-2nd Amd SAFE Act and don’t have the balls to tell their constituents that, so they come up with this bogus nonsense.

Either way they should be booted out of office. Either they’re lying scumbags or incompetent boobs. Which is it?

They’re politicians. One, the other or both is pretty much a given.

A mission-critical skill in being a politician is getting the credit for saying YES and escaping the blame for saying NO on almost all issues, or vice versa.

We see this all the time when a hot issue is being considered. The preliminary committee votes where something can actually and permanently be stopped are frequently where the weasels act like weasels. Then the Weasels claim credit for voting yes on the Motherhood and Apple Pie Promotion Act of 2014 but fail to tell you they voted to give huge subsidies to the Apple Growers Assn.

It’s not exactly a headline to mention that lawmakers are lying, covering for lies, or simply incompetent. That’s pretty much business as usual.

Legislators have one, and only one, job: Formulate, digest, debate, improve and ultimately make or reject legislative proposals representing the wishes of their constituents. If they cannot adequately do their job, they need to resign. In disgrace would be preferable, but I’d settle for just resigning.

Machiavelli would have said that legislators have only one job, and that is to stay in office. Whether they try to do that by serving the electorate honestly and competently, thereby earning their votes for re-election, or do it by baffling ’em with BS, is up to them.

Relative to geography, I suspect a moderate Republican in NY state is roughly the same on the scale as a liberal Democrat in Oklahoma, so…..

There’s only three options here – they’re either lying, flat-out admitting that they didn’t review the budget prior to voting, or are trying to cover their ‘yes’ vote by alleging they didn’t know what was in the budget.

I just wanted to repeat this. 🙂

This Assemblyman knew SAFE Act funding was in the budget. http://youtu.be/XD4UDmIl-wE