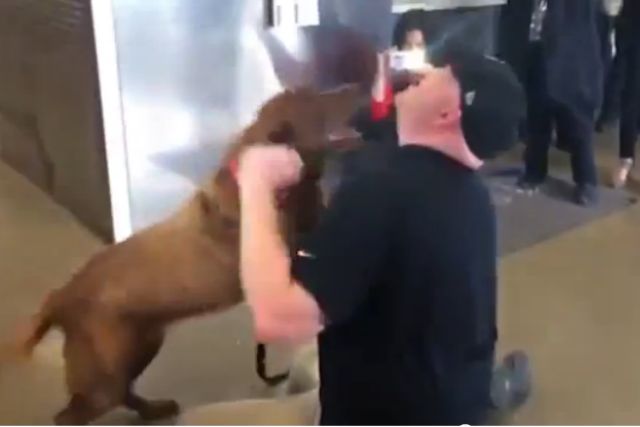 I’m a sucker for these stories, so I couldn’t help but post about it when I saw it over at The Blaze.

A veteran and the bomb-sniffing dog he worked with in the military were reunited this week, after the opportunity became available for the dog to be adopted by her former handler.

The full story was covered by the Chicago Tribune, which also posted the video. Here’s an excerpt:

It was a sad parting when Sgt. Jason Bos left Fort Lee in Virginia nearly two years ago and had to say goodbye to MWD Cila M389, the bomb-sniffing chocolate Lab he called Cici.

Over nearly five years, Bos and Cila — MWD stands for Military Working Dog, and M389 is the identification number tattooed in her ear — had forged a bond as they searched for roadside bombs and hidden weapons caches in Iraq, and screened sites for presidential visits across the U.S. Their partnership ended when a back injury forced Bos to leave the Army in 2012.

Cila was just 5 years old, and still had time to serve as a military dog. While Bos headed home to Michigan, Cila remained on active duty.

Bos, 33, did not know if he’d ever reunite with Cila. But a month ago, he saw on Facebook that Cila was due to be retired. He was thrilled when the kennel master at his former base contacted him to see if he wanted to adopt her.

After the veteran completed all the necessary paperwork and got a little assistance from the American Humane Association and Mission K9 Rescue in paying for the dog’s trip over from Germany, Bos was finally reunited with Cila earlier this week.

When the dog arrived at O’Hare International Airport, Bos leaned down and called her by the name “Cici.”  Cici responded immediately, and quickly pounced all over her friend.

Cila’s new home will be in Michigan with Bos, where he shares a home with his brother, reports the Chicago Tribune.

I am just happy the military recognizes who special these dogs are and the bond they have with their humans.

We didn’t use to bring our hero dogs home.

May she have a long and relaxed life.