And also take your privilege check and … 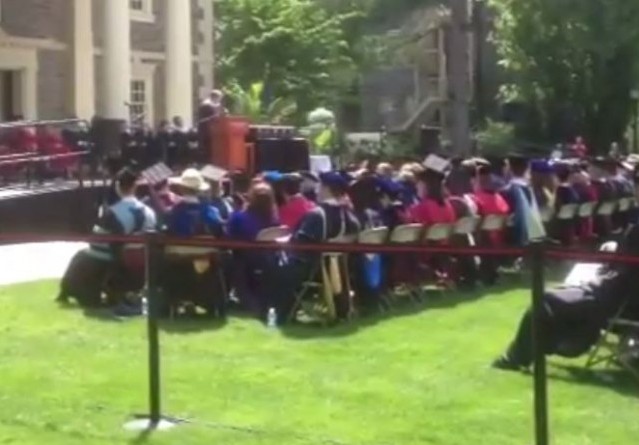 That’s a rough paraphrase of the Commencement address at Haverford College yesterday, via The Blaze:

After more than 40 Haverford College students and three professors protested an invitation to Robert Birgeneau — former chancellor of the University of California, Berkeley — to speak at the suburban Philadelphia school’s commencement, Birgeneau eventually bowed out.

Those opposed to Birgeneau’s presence were apparently angry over how he handled a 2011 incident at Berkeley involving the use of force by police at a student protest.

… Bowen ripped into the graduates who took issue with Birgeneau’s invite, calling them “immature” and “arrogant.”

“I am disappointed that those who wanted to criticize Birgeneau’s handling of events at Berkeley chose to send him such an intemperate list of ‘demands,’” said Bowen, noted the Philadelphia Inquirer. ”In my view, they should have encouraged him to come and engage in a genuine discussion, not to come, tail between his legs, to respond to an indictment that a self-chosen jury had reached without hearing counter-arguments.”

Someone needs to tell it to Harvard Education School:

Dozens of student and alumni at the Harvard Graduate School of Education issued a statement (see below) protesting the selection of Colorado state Sen. Michael Johnston (D) as the school’s 2014 commencement speaker because, they say, he “embraces a vision of education reform that relies heavily on test-based accountability while weakening the due process protections of teachers.”

We expected what ? That today’s college kids believe in free speech ? Open debate ?

Or utter repression of any view they don’t like ?

Actually, I think the speech showed the opposite. He attacked that minority that caused the trouble and the student body gave him a standing ovation. Similarly, it was brave of the Rutgers students to invite Rice to speak.

I’m afraid the result of this will be students fearing to invite “controversial” (sane) speakers lest they get egg on their faces when the inevitable happens.

Let’s put the blame where it belongs – on the faculty and administrators.

The “brats” know their parents and everyone else who came before them were just hateful bigots who made the world an awful place. After they fix what’s wrong with society, maybe two or three of them can pool their resources and get their own apartment.

Looking over the WaPo link about the Colorado Senator speaker….I think students lack touch with reality.

One speaker = one perspective.

Do you want them to invite several speakers to your graduation and have them all give talks in a drawn-out ceremony already rife with back-patting and self-congratulations?

That’s the only way you can get a diversity of opinion and it would cost more money (ends up going to students’ costs), take more time (most students and their professors don’t want this), and pander to a whiny generation that is frankly in need of a massive proverbial butt kicking.

In turn, we are asking you to do three things:

-rescind the offer to Sen. Johnston,

-make the process for vetting future speakers more transparent and inclusive of a diversity of perspectives, and

I remember reading about one father’s agony of picking up his daughter after she finished her freshman year at college, and having to endure lectures from her on the hours-long drive home … after all her 101 classes, she had insight into how the world worked and was imparting all her knowledge to her backwards father.

No doubt she was subjected to a lot of cognitive dissonance, and it was working its way out of her system.

Here’s hoping he pulled her out for a year to flush the nonsense and get her grounded again,

Not immature brats, agents provocateurs deploying active measures. Taking them as brats is comparable to taking Boko Haram as not Islamists and “Islam” as not a complete, revolutionary social order — Caliphatism: http://freebeacon.com/national-security/shaheen-boko-haram-is-not-islamist/

I graduated from Haverford in 1978…with very different politics than I have now, but I would have applauded Bowen then as much as I do now. It’s refreshing to see someone from the other side of the spectrum take the position he took, and it would have been great if Birgenau had done so instead of backing out angrily.

What’s wrong with that?