There are worse things you could be

There are worse things you could be 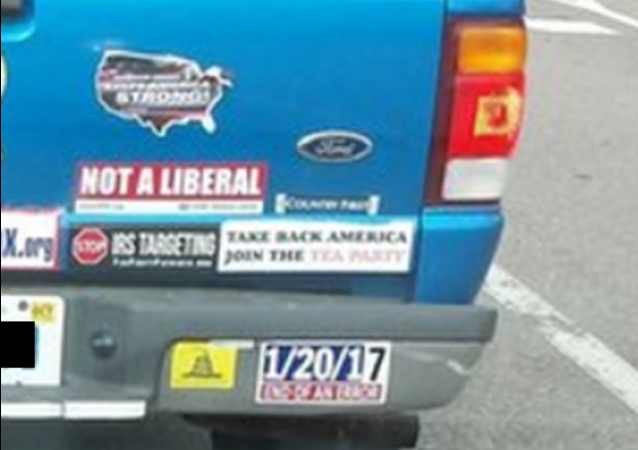 From Jon, uncle of one of my former students:

So far Livingston County in Michigan is still pretty conservative but I have noticed a few *ugh* “Hillary in ‘16” bumper stickers.

When I first moved here the democrat party didn’t even have a full time headquarters now they’re in the paper whining all the time.

But then again, the local paper was taken over by libs who also publish the Det. Free Press aka Liberal mouthpiece media.

NOTE: This is the 12,000th post at Legal Insurrection! Oorah!

“Imagining hope” is the essence of Door No. 2. Whatever reality tells us, the possibility of something greater has an irresistible lure.

As in Let’s Make a Deal, choosing Door No. 2 carries great risks. So does choosing Obama.

Obama may be a post-racial healer, or he may be someone who carefully uses race and false accusations of racism to advance his political career. Obama may not have known about Jeremiah Wright’s political race-baiting, or he may have known but not cared. Obama may be someone who views this country as inherently good, or he may secretly share the views of his political enabler, William Ayers, that this country is inherently bad. We may know Obama better than Jeremiah Wright and William Ayers know Obama, or we may not know Obama at all.

Obama may be everything good, or the promise Obama embodies may just be a figment of our own imagination.

Like you, some of us did see behind the curtain.

You saw it – see it – and present that view to the world in a compelling, simplistic, powerful way.

Congratulations on the milestone…..you are priceless!

What did the Prof write to merit such a putdown?

Livingston County, Michigan. I have a lot of family there in Howell and Fowlerville.
……………

Congrats on numerical milestone, but your effect in the political arena is far greater.

12,000 posts is a lot. However, the really remarkable thing about it is that each one was a valuable post.

Well, I am honored to be your 12,000th post, thank you very much Professor. My brother first sent me a link to your site while Jen was at Cornell three years ago. I’ve been enjoying it ever since.
And Jen (my niece) is doing very well as a lawyer (passed her first bar exam unlike the current Presidents wife and other notables).

Henry, if you haven’t made a trip to the area in a while it’s gotten pretty crowded compared to when I first moved here.

I go back at least yearly. The other half my Michigan family live in the UP, Hancock and Eagle Harbor.