The State of New Yogurt

The State of New Yogurt 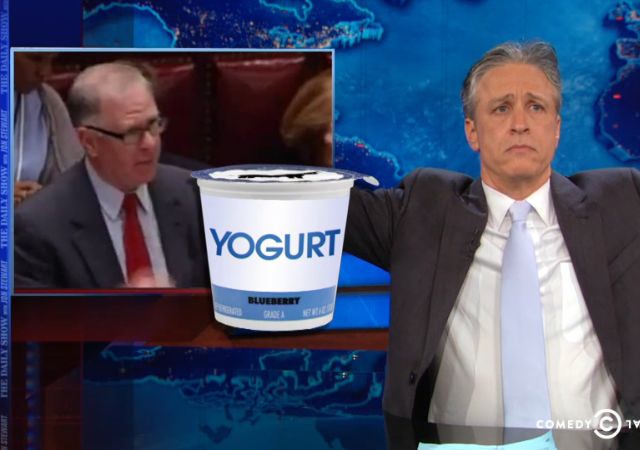 I don’t always find the segments on The Daily Show with Jon Stewart all that funny, but every so often he hits on something that gives me a chuckle. And Thursday night I found myself nodding my head at the TV and laughing aloud at one of those moments.

Stewart poked fun at the silly spectacle of a debate over whether or not to designate yogurt as the official state snack of New York, after lawmakers took to the floor to consider the bill in the state Senate earlier this week. It seemed a fitting representation of the state of politics and the political process today.

The idea for the bill was suggested by a local fourth-grade class, according to Republican State Senator Michael H. Ranzenhofer, who sponsored the bill.

Ranzenhofer said the idea for yogurt as the state snack came from teacher Craig Schroth’s class at Byron-Bergen. Earlier this year, the fourth-grade class had been learning about state government, when the Russian government blocked a shipment of Chobani yogurt during the Winter Olympics, Ranzenhofer said.

The ensuing debate over that bill was described by the New York Times, Animated Debate in New York State Capital? It’s About Yogurt:

On Tuesday, it focused its attention on yogurt.

Specifically, it took up a proposal to designate yogurt as the official state snack. Yogurt production happens to be a booming industry upstate.

But in Albany, no matter is too small to provoke disagreement. And honoring yogurt, it turned out, was too much for some lawmakers to stomach.

One senator, Liz Krueger, a Manhattan Democrat, suggested the designation might be inconsiderate to people who are lactose intolerant. Another, Gustavo Rivera, a Bronx Democrat, wondered if yogurt could count as a snack if it were consumed at breakfast time.

Alternative snack ideas were raised. The distinction between Greek yogurt and regular yogurt was clarified.

View Stewart’s play-by-play of some of the best debate highlights below, in two videos.  Code Pink (sort of) even has a cameo. (Warning, some profanity).

After nearly forty-five minutes, the bill eventually passed by a 52 to 8 vote and has been sent on to the State Assembly.

But Stewart had a closing message for lawmakers before the bill’s next vote.

“Before the Assembly takes up debate on state bill A8994, I want to remind them that when it comes to yogurt attaining the designation of state snack, I must reinforce to our representatives that the good people of New York do not give a f***.”

I think that they were just having fun. The debate over “New Mexico is a State Day” in the Congressional Record is one of the funniest things I have ever read. So I think he is being petty. Legislators can relax a bit also.

I recall when New York State designated the bee as the state bug (as opposed to the state insect). They couldn’t resist a bunch of fourth graders pretending to be bees.

(PS – The famous state designation of PI as 2.9 was also done in fun.)

Next up: consideration of the State “Idiot.”

After consideration of the State Idiot comes how many devils may dance on the head of a pin.

It’s an old tradition. Fourth grade seems to be when it happens. I suppose they petition for something dumb – the state fossil, state bird, state cookie, blah blah – to see how government works, even if it doesn’t work very hard.

If the petition doesn’t come from a fourth grade, it’s a sign of trouble, such as the state with a state mineral found in only one known lump of rock in the state. The rock is on private land, and a geologist who had a bit of a sideline chipping off samples wanted to retain access when the ownership changed hands. So he managed to get it declared the state mineral, which gave him access to this unique rock. The new owners weren’t overly excited about minerals and would have been happy to have him hire a rigger to haul the whole boulder away, but the geologist was too much of a cheapskate. Exactly who had to bribe whom to make all this foolishness happen wasn’t covered in the papers.

Yoghurt & kheffir. are easily made however some batches don’t quite set . They can be drunk. like it is in most of the original Kurd / central asian / Russian / noth west med regions .