The most important space in journalism

The most important space in journalism 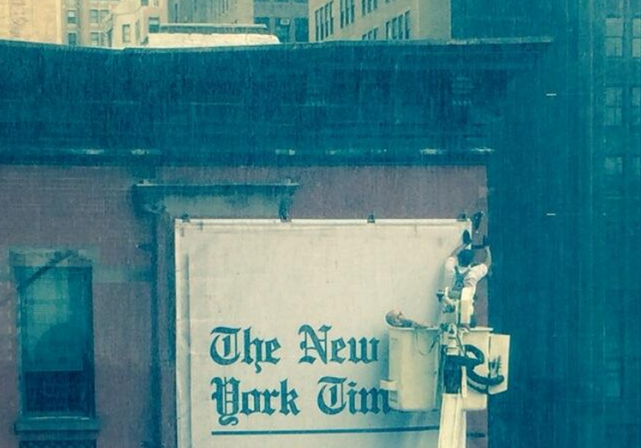 The large wall across the street from the NY Times headquarters.

Get a load of the new sign being posted outside the @NYTimes newsroom pic.twitter.com/PkubYM1mFC

That’s almost a literal hoisting by one’s own petard.

Hey, I needed a trigger warning on that!! I laughed so hard I nearly had soda coming out my nose.

It is great to see. A newspaper that recently published an op ed saying that Iran is moving in a positive direction and will trade places with Israel in terms of providing for its citizens (aside from egregious journalism in other areas) ,deserves to be called out on its dishonesty. I hope this campagn will be beneficial for raising awareness. http://www.nytimes.com/2014/04/12/opinion/sunday/are-iran-and-israel-trading-places.html

I was on the record saying, within a few days of the initial “hiring” of Pinch Sulzberger, that it would mean the death of the NYT. It was no secret in the industry that he had wanted in for some time.

His father, “Punch,” was a real newspaperman, if a liberal ass, but he was proud of the reputation for accurate reporting his team had built. He brought his idiot son in as he was easing out the door.

Had Mexican telecom monopolist billionaire Carlos Slim not agreed to rescue the paper some years ago, it would have been sold off for assets, the value of the real estate and equipment exceeding the market equity of the newspaper operation.

And Most Respected Source of Fiction.

They will probably demand it be taken down for misuse of trademark. Any legal opinions on that?