Marshall Coulter, shot while attempting to burglarize Merritt Landry, has been accused of another burglary after the shooting, and now also for a home invasion committed in 2012 when he was 13 years old 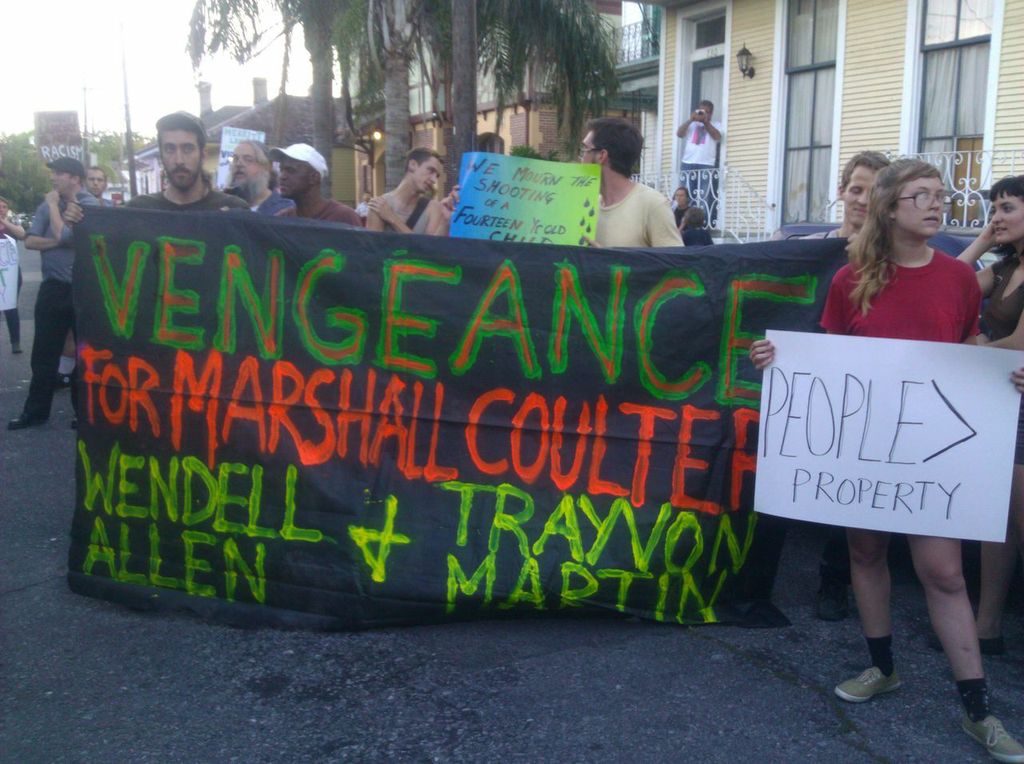 How can we miss him, when he won’t go away?

Marshall Coulter is, of course, the 15-year-old (then 14-year-old) shot through the head by Merritt Landry last July, when Landry found the youth inside his enclosed yard just feet away from his home’s door at 2AM.  The event, following on the heels of the George Zimmerman acquittal, resulted in a number of “pro-Marshall Coulter” protests, including the one pictured above.

Boy, must THEY feel silly.

Coulter–who had been widely and repeatedly reported as bed ridden and essentially non-functional as a result of the bullet to the head–was arrested for burglary just this past Friday, as I posted here:  Teenage burglar in high-profile New Orleans self-defense case burglarizes again.

Today the New Orleans Times-Picayune is reporting that Coulter was also booked over the weekend by the police on separate charges of home invasion:  Marshall Coulter, teen shot by Marigny homeowner, now accused of crime of violence.

Interestingly, this home invasion is reported to have occurred not recently, but back in June 2012.  At which time Coulter would have been a mere 13 years old.  That’s not a typo. Thirteen.

The residents who suffered the home invasion reported to the police that they returned home at about 3:30AM from a night out, and found Coulter inside their home.  They struggled with him, and then Coulter armed himself with the homeowner’s own gun.  Coulter then fled with the gun, police said.

It is unclear when Coulter became a suspect in that 2012 home invasion, as well as when the warrant was issued for Coulter’s arrest in connection with that event.

The Times-Picayune reports Landy’s lawyer, Kevin Boshea, as saying that this disclosure of Coulter’s allegedly violent past buttresses his client’s reasonable belief that he was in danger of death or grave bodily harm when he shot Coulter the night of July 26, 2013 at 2AM.  Boshea stated that Landry had repeated yelled “Stop, stop, stop” but that Coulter had continued to advance towards Landry and towards the door past which Landry’s pregnant wife.  It was only then that Landry fired his single shot, Boshea said.

One would think that this latest news can only accelerate the date at which prosecutors will formally  cease their efforts to prosecute Landry on the attempted second degree murder charges on which they have been unable to get an indictment after multiple attempts, even prior to Coulter’s latests series of arrests.

“That’s not a type. Thirteen.”

I suggest “typo” was what you meant. Although a barely pubescent teen criminal is a “type”, as well. Some of them are hit men.

at what point do you just lock the kid up and call it a day… seriously. the little monster belongs behind bars.

Huh. Slightly off topic, but…

She decried new laws proliferating across the country that allow people to carry weapons in churches, bars, and other public places, saying that they will only lead to more deadly violence that could otherwise be avoided. “At the rate we’re going, we’re going to have so many people with guns,” she continued, “in settings where…[they] decide they have a perfect right to defend themselves against the gum chewer or the cell phone talker.”
—Hill-larry Clinton, as reported at TheCorner

Remarkably stupid. And why?

‘Cuz she’s got armed bodyguards and, being like all ‘rats who always maneuver their advantage through bastardized lawsuits and legislation, never wants a fair fight?

“People > Property”. Are they serious? The progressive concept of “diversity” and normalization of abortion/murder degrades people to a commodity status, which assures we are interchangeable and disposable, respectively. I don’t think they fully appreciate the consequences of the deal they have made.

They also don’t seem to understand that the “People over Property” sign doesn’t make sense here, because the guy who shot Coulter wasn’t just protecting his property; according to him, he was protecting his and his pregnant wife’s lives. This Coulter kid came onto the man’s property in the middle of the night, and refused to stop advancing towards the homeowner and his wife even after the man shouted a warning to stop. Similarly, George Zimmerman wasn’t protecting property when he shot Trayvon Martin. Martin had Zimmerman pinned on the ground, and was beating his head in. Zimmerman shot Martin to protect his life.

So even if you believe that people matter more than property (and who doesn’t believe that?), the sentiment simply isn’t relevant to these cases.

They may understand it all very well but simply not care about the truth because it doesn’t advance the agenda that’s been indoctrinated in them.

As for Martin, they really wish that his surprise assault had been successful, and that he would would have murdered Zimmerman by collapsing his skull. Yeah, their message is more than a little confused.

Boy, must THEY feel silly.

Their problem is a state of mind, and that won’t have changed.

No, they don’t feel silly because *obviously* the problem is that no government agency intervened in this family to help young Marshall. If more tax dollars had been thrown at him, he wouldn’t have had to steal what should rightfully be his.

Laura the family really did need help. The mother was struggling on her own after her husband, the bread-winner had died. It really is a sad case because the widow and mother could not control Coulter who was already very much out of control when almost ended up dead.

This does not excuse Coulter at all. It does not excuse the family and especially the older brother (who probably wanted to be back at school anyway). This is only to point out that the family had been deprived of its bread-winner when he died and that they were not coping. Intervention might or might not have helped them.

“People are greater than Property” implying, I suppose, that we don’t have the right to use deadly force to protect our property.

“Vengeance” for Marshal, Wendell and Trayvon.

It’s no wonder people who think this way flock to the big prog cesspool cities… they simply would not survive long in “fly over” country.

I guess some people are more > property than others.

Not a very diverse crowd of protesters. Maybe they meant “People=Property”

“Boy, must THEY feel silly.”

No, they feel only outrage that we do not see the moral truth of their position.

“Police said they suspect Coulter as a 13-year-old broke into a house in the 900 block of Frenchmen Street on June 11, 2012. The residents returned home around 3:30 a.m. and found the teenager inside the house. The residents had a “struggle” with the teen, who then armed himself with the victims’ gun, police said.

Coulter then ran away with the victims’ gun, police said.

Police did not book Coulter with that crime, an aggravated burglary, until Friday, even though there was an arrest warrant on file. Two law-enforcement sources said Coulter was believed to be incapacitated after being shot in the head — his mother said he was still undergoing skull surgeries in December — so authorities did not seek him out to book him right away.

It is unclear when Coulter became a suspect in the Frenchmen Street home invasion. Officer Garry Flot, a police spokesman, said he did not know when the arrest warrant was secured.

“One would think that this latest news can only accelerate the date at which prosecutors will formally cease their efforts to prosecute Landry on the attempted second degree murder charges on which they have been unable to get an indictment after multiple attempts, even prior to Coulter’s latest series of arrests”.

Man oh man are you out of touch with the law enforcement community of today. Even knowing all of this perp’s prior criminal history the LEO’s will go right ahead and prosecute this man who was defending his wife and home from this thug. There is a new case involving several teens who had broken into a home with two elderly residents who subsequently shot and killed one of the invading teenagers. Now there is talk that one of the gunshots might have been aimed at the intruders while trying to leave the scene. Possible prosecution of the old folks?

First of all, LEOs don’t prosecute.

Second, we can hardly draw any conclusions from the new SD event you cite, as nothing has yet happened. “There is talk”? Meh.