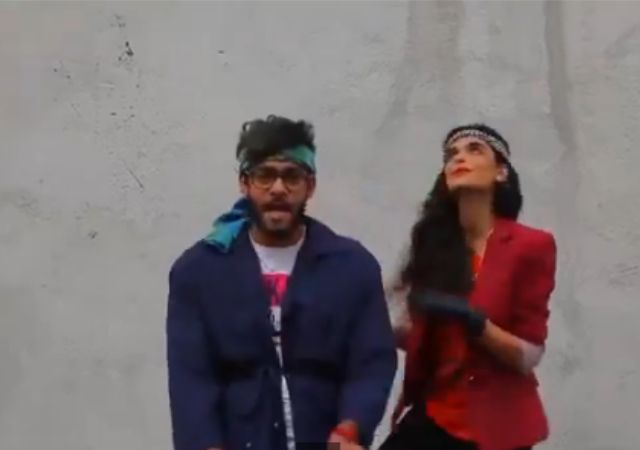 Six young Iranians were arrested earlier this week after a video was posted online in which they were featured dancing to Pharrell Williams’ hit song “Happy.”

Apparently, dancing to a song about happiness in Iran can get you arrested.

Six Iranians are behind bars after they appeared in a fan video set to Pharrell Williams’ “Happy,” the American hit song that has sold millions of downloads worldwide.

Tehran Police Chief Hossein Sajedinia ordered the arrests of the three men and three women because they helped make an “obscene video clip that offended the public morals and was released in cyberspace,” the Iranian Students’ News Agency reported Wednesday.

There is additional back story in this Huffington Post article.

Here’s the video, which was originally posted to YouTube weeks ago (it has reportedly since been made private but other uploads of it are posted around the internet):

The group was later forced to repent in a video that was broadcast on Iranian state television, according to the NY Times and other news reports.

Pharrell Williams expressed his disappointment on Twitter and on his Facebook page upon hearing of the arrests. And news of the arrests also sparked support for the six Iranians on social media, inspiring the hashtag #freehappyiranians.

As Professor Jacobson has previously noted, similar cover versions of the “Happy” video have also been done in places such as Gaza and Israel.

Update – CNN has updated its earlier article to reflect this updated news:

Five of the six people who were arrested in Iran for involvement in a YouTube video dancing to Pharrell Williams’ song “Happy” have been freed, the International Campaign for Human Rights in Iran said Wednesday, citing a source close to the families.

The director of the video was not released, the group said.

One of the six announced that she was freed. “Hi I’m back,” Reihane Taravati wrote on her Instagram account, thanking Williams and “everyone who cared about us.”

See below for an earlier full video report from CNN.

There are to be “No” happy people or smiley faces in Iran.

Only the Siemens VFD centrifuges endlessly spinning can be happy’ and ‘enriching’ in their gyrations.

During the Iranian Hostage Crisis Chicago DJ Steve Dahl and Teenage Radiation did a parody of My Sharona called “Ayatollah.”

The dancing Iranian outlaw ‘gang’ might have better luck with the Ayatollah song.

While I never claim to be really tuned in to the foibles of The Prophet and his sycophants, I don’t see anything here which reaches the levels of disrepute of any of history’s more notorious scandals or outrages, such as President Zach Taylor’s trousers. All I see here is that one of the guys’ hats had a vaguely Hassidic Orthodox look to it, and of course the girls and the boys appeared in the same video – quelle horreur! (Maybe the woman giggling while upside down? That’s all I see there that’s even different, but it’s hardly inflammatory, unless the Koran has some sort of stricture about handstands.)

Now the Persians have been around for a long time, and have had thousands of years to think up things to be offended about, some of them things I haven’t myself gotten around to imagining yet. But does anybody in the Western world know just why these guys have their knickers in a twist?

Iranian people are very cool. They want religious freedom. Its the government that is full of radical islamists.

You’re talking about a society in which women have been beaten for having hair peeking out from their veils. They’re governed by a religion that prescribes the death penalty for anyone who decides not to subscribe to its beliefs or rules.

Many Iranians know they are Persians and see Islam for what is: an evil cult devised by barbarian desert nomads and caravan raiders to justify their constant plunder and conquest and power lust. The conquerors spun a fable about the deity commanding them to dominate others and control their lives. Unfortunately, a billion or so people now actually believe that those cruel and insane and antihuman rules came straight from the mouth of the supreme being, and that questioning them is the very worst kind of evil.

There are males and females together in that video, and the women are not wearing head coverings or the Islamic coat which is required in public. These items are enough to bring out the “decency” police.

Music and dancing are prohibited in all Sharia compliant countries.

“There is no fun in Islam.” — Ayatollah Khomeini

“There is no fun in Islam…”

…Mighty Casey has struck out! (Someone had to do it!)