Chris Hayes for the defense 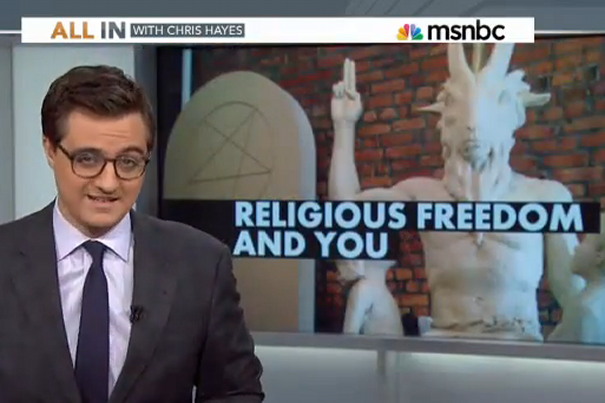 Much has already been written about the Satanic black mass which was supposed to take place at Harvard last week but I feel MSNBC’s recent participation in the story warrants one more post on the subject.

In the video below, MSNBC’s Chris Hayes attempts to make some moral equivalency between Satanism, Christianity, freedom of speech and freedom of religion. What he fails to understand and neglects to adequately explain to his handful of viewers is that the outrage over the Harvard black mass wasn’t an attempt to squelch the religious rights of Satanists as much as it was recognition of extremely poor taste on Harvard’s part.

Whether you like the school or not, Harvard is one of the nation’s most prestigious institutions of higher learning and is therefore held to a higher standard. In short, people expect better from Harvard.

As a spiritual entity, Satanism would not exist without Christianity. The very central premise of Satanism is the rejection and mockery of Christianity, which explains why a host on MSNBC would rush to defend it.

One has to wonder if MSNBC would defend free speech and freedom of religion if a group of Harvard students decided to burn a Koran on campus.

You let’s-mock-religion guys set up the incentives for the faithful with your own behavior. If a religious person responds the way the loudest Muslims do, everybody’s too scared to mock them. If a religious person responds in the nice and tolerant way the Christians and Jews traditionally do, they’re the butt of every joke and everybody’s favorite punching bag. The satirists of organized religion must be astonishingly slow-witted if they thought other religions wouldn’t notice their habits of self-censorship.

Here’s the MSNBC segment featuring the head of New York’s Satanic Temple. He clearly thinks he and his fellow devil worshipers were the victims in all this. Chris Hayes is all to happy to indulge them.

Take away rachel maddow’s penis and you get chris hayes.

Some folks take issue with teachings like “Love your enemies, do good to those who hate you; bless those who curse you, and pray for those who treat you insultingly.” They despise nuns in habits giving their lives to staff hospitals, schools, and orphanages. Their recourse is to make mockery of our sacred worship; worse, to invert it into worship of Satan himself. If that’s not in-your-face anti-Catholic taunting, then I don’t know what qualifies.

Anti-religious bigots need to check their privilege, too.

One has to wonder if MSNBC would defend free speech and freedom of religion if a group of Harvard students decided to burn a Koran on campus.

As a spiritual entity, Satanism would not exist without Christianity. The very central premise of Satanism is the rejection and mockery of Christianity

Aleister, good evening to you. Please, read and try to understand your Bible, for instance, Genesis, Job, and Isaiah, to name a few; before you talk about Satanism not existing without Christianity, check out Nimrod and Babel.

[T]he outrage over the Harvard black mass wasn’t an attempt to squelch the religious rights of Satanists as much as it was recognition of extremely poor taste on Harvard’s part.
…
As a spiritual entity, Satanism would not exist without Christianity. The very central premise of Satanism is the rejection and mockery of Christianity, which explains why a host on MSNBC would rush to defend it

Point 1: poor taste is all about which wines go with which meats, whether or not to wear white after Labor Day, and whether grossly obese women should squeeze themselves into spandex. Entertaining a Black Mass on campus is not poor taste; it is woefully unsound judgment. It is foolish in the extreme. Calling it “poor taste” is mealy-mouthed. It’s poor taste to open a doorway to hell and summon evil?!

Point 2: Satanism, at its bedrock, is a rebellion against God. It always has been and always will be. “Did God say…” Is the rebel’s slap against the Word and doctrine of God. Those who worship the first rebel, Satan, know this and revile Him for His just expulsion of Lucifer from His presence. Sure, the Satanists rail against the Christ, the Messiah, and they do so because He is our advocate before God. It is worth noting that eve the demons in hell, even as they spew curses at Him, confess Christ is God. The very essence of Satanism is not the mockery and rejection of Christianity (who comes up with these things?); instead, it is the raw and unbridled quest for power, the lustful desire to be God, the vengeful burning to successfully slap back at and defeat God.

Sure, the Satanists babble on about the Mass of Catholicism, yadda yadda; all of that nonsense is a feint intended to mask the true object of their desire: the supplanting of God with Satan.

Point 3: Christianity, no matter who may be offended by the saying of it, is a logical outgrowth of Judaism which embraces entirely the TNK of Judaism, wholesale. No Judaism, no Christianity. Therefore, to argue that “Satanism would not exist without Christianity” is to pretend that Satan is a Christian invention without a source in Judaism. What you see in the NT is grounded in what’s in the TNK, with the references to back it up. Moreover, whatever name he is called, serpent, Lucifer, the great dragon, the great deceiver, the first liar, son of God, he is still Satan and from the fall in heaven, as recorded in Isaiah, has had a following, aka Satanists.

You just gave me a whole week’s worth of things to ponder. Thank you.

>> to pretend that Satan is a Christian invention without a source in Judaism.

The recent Noah movie prompted this review which I think speaks to your point, and might be pretty interesting even if it doesn’t:

Mattson: B.A. from Montana State University-Billings, an M.A.R. from Westminster Theological Seminary, and a Ph.D. in Systematic Theology from the University of Aberdeen (Scotland). now Senior Scholar of Public Theology for the Center for Cultural Leadership. serves on faculty for the Alliance Defending Freedom’s Blackstone Legal Fellowship and Collegiate Academy.

I read it and was wonderfully impressed. He is right. You read Irenaeus and discover all things old are new again

Christianity, no matter who may be offended by the saying of it, is a logical outgrowth of Judaism which embraces entirely the TNK of Judaism, wholesale.

Is this the opinion of someone who is Jewish or Christian? If the latter, which schism and denomination?

Catholic, here, and I agree, based on my attendance at a lot of seders and services.

From a Catholic point of view, it looks like Jesus won all his theological arguments with the Pharisees, so that Judaism is different from Catholicism only in detail. If one refers to the famous Sermon on the Mount, where Jesus was asked “What is the greatest Commandment?” the quote that is embraced wholeheartedly by the Catholic Church (“Love God with your whole heart, and mind and spirit. And the second is like it: Love your neighbor as yourself”) is a quote from the Torah.

Further, I would add that real Islamic scholars know this, and also embrace the same two commandments as the foundation of their religion. http://www.acommonword.com

you were cut from what is by nature a wild olive tree, and grafted, contrary to nature, into a cultivated olive tree

It’s the opinion of someone who confesses Christ and has a great deal of love for our elder brother, Israel.

Whose 1st Amendment rights are being violated? No one could force Harvard to host a Black Mass, and the powers that be there had a right to change the corporate mind about the advisability and/or good taste of this enterprise. Maybe, like Brandeis, they decided to look into the backgrounds of the folks who were promoting this and uncovered some unsavory stuff, like remarks denigrating the beliefs and activities of another religion…oh, wait.

An effective spirit of inquiry – one of the things we all pretend is subsumed under the poor abused concept of “academic freedom” – requires in part that one sometimes abandon certain niceties –
(i) the fear of making a fool of one’s self
(ii) the fear of poor taste
(iii) loads of others, think up a few

These things are social shackles intended to herd thought and action into safe channels. And they have their place; they’re what permits the smooth functioning of daily society. But they’re sometimes not so good for any academy which is more than a mere finishing school.

Anti-Catholicism is the what of the who?

I did not realize Baphomet is Boy Scout. (hand sign)

I’m also bit bummed by 10 commandments in front of State Buildings. Especially when so many of them were funded to promote a Cecil B. DeMille’s 1956 epic film The Ten Commandments.

Those early Hebrew laws might have influenced the judgement of early lawmakers, but they got themselves kings eventually leading to priests, the whole lot down the line corrupted. I’d rather the U.S. constitution be personified somehow with emphasis on bill of rights. Farther out the magna carta. I’ve always been fond of Justice personified, the blindfolded lady with scales is nice but a modern versions would need more wires for hair than Medusa has snakes and obfuscate the whole thing. A pile of wires much like the spaghetti monster statue the atheists would prefer.

A red-eye blue horse! Go Broncos. I know this makes me bad but somehow I’m tickled inside knowing the statue and its veiny blue ass fell on and killed the artist. I mean to say sad inside.

I do not have a reply button, so I doubt anyone will see this, but Juba is wrong. In Judaism, the satan (it is a title, basically D.A., not a name) is NOT God’s adversary. Only people have free will, only people can rebel against God. And “lucifer”, which is a translation, is the angel of Babylon, who “fell to earth” with the destruction of that empire.

It really helps if you realize you’re reading an interpretive translation, or are able to read the original, as we do.

You can say the same thing about Protestantism, which was founded on the rejection of the Church in Rome.

Were I a Satanist, I would make it all about worshiping Milton’s Satan, who is the only interesting character in Paradise Lost. In fact, since Milton’s Satan is just an extreme individualist, some other commenters on this web site might also be interested in my brand of Satanism…