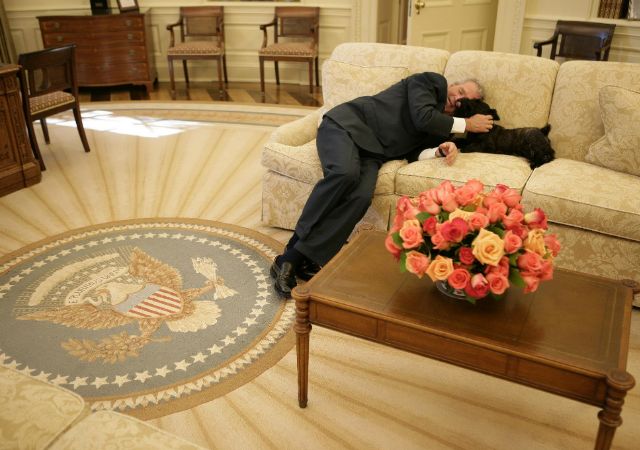 In a statement posted on his Facebook page, along with the featured photo above, the former president announced:

“This weekend our beloved dog, Miss Beazley, was put to rest after a battle with lymphoma. She was a source of joy during our time in Washington and in Dallas. She was a close companion to her blood relative, Barney. And even though he received all the attention, Beazley never held a grudge against him. She was a guardian to our cats, Bob and Bernadette, who — like Laura and I — will miss her.”

Miss Beazley was born in October 2004.  The former president gave the dog to then first lady Laura Bush as a birthday gift in 2005.

The Bush family’s other dog Barney died in February of last year.  Both dogs were often seen at the Bush White House and in photographs, and in a special Christmas video.

President Bush loved their dogs as companions. He doesn’t view them as a food source like the current “president” does.

Nor were Barney and Miss Beazley kept around as props to be dragged out for the cameras as the Clinton’s pets were.

A family’s dogs say a lot about them. The Clintons went for the most popular breed in the nation and gave it the most popular dog name at a time Bill’s popularity was sagging. the Obamas went exotic and trendy. Each year the Westminster Kennel Club notes that Scottish Terriers are independent animals for people who are “confident enough to love a dog that openly feels superior to its owner.”

How nice that the Bush dogs were allowed in the White House without being leashed.

The video brought a tear to my eye. How far we have fallen since 2005. I don’t even recognize this country anymore.

You make a great point about this video and story. It really is a shock to consider how quickly our country has deteriorated under this administration. Horrifying.