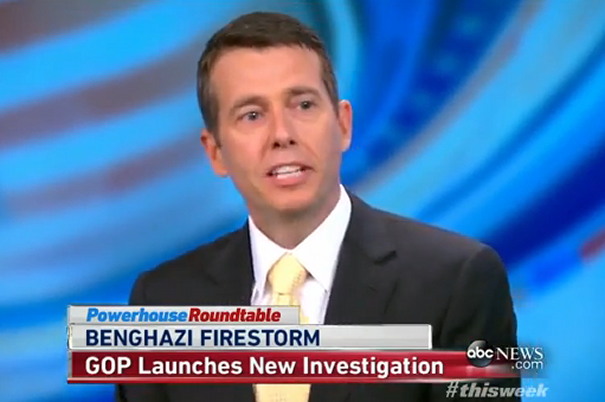 Obama adviser David Plouffe appeared on ABC’s This Week today and in a classic case of liberal projection, he tried to blame the GOP for politicizing the attack in Benghazi.

Conservative talk radio host Laura Ingraham was also on the panel and took Plouffe to task.

David Plouffe, you’re actually on that email that caused so much trouble this week. It was an email to you and several others from Ben Rhodes. And everybody keying on this line in the — in the — in the email, to underscore — this is the goals of the Sunday morning appearance — “to underscore that these protests are rooted in an Internet video, not a broader failure of policy.”

A lot of Republicans saying this is the smoking gun.

I know you dismiss that, but was it a mistake not to release this email earlier?

DAVID PLOUFFE, DEMOCRATIC STRATEGIST: No, I think, you know, lawyers have spoken to this and it’s out now. I think, listen, what Benghazi was was a tragedy. What we need to do is figure out how to prevent it from happening again and to try and hold those accountable, as we did bin Laden.

I think what you see wasn’t the U.S.S. Cole bombing, 17 of our sailors died. The weeks before the 2000 election. What did then-Governor Bush say? It’s time for our nation to speak as one voice.

Now you couldn’t handle that in this party. This has been politicized like we’ve never seen before.

And I think what’s happening, Richard Nixon talked about a silent majority back in 1968. There’s a very loud delusional minority that’s driving our politics, that’s in control of the Republican Party. There’s no conspiracy here at all.

LAURA INGRAHAM, SYNDICATED RADIO HOST: Well, this is why Obama won in 2008. (INAUDIBLE) good. And look, the — what we know now from the email is that from the beginning the administration saw Benghazi as a political problem.

You’re on that email; you were the White House, you know, senior political adviser and this was a political problem. You had a tough campaign; you had Mitt Romney. You didn’t think it was going to be a big blowout at that point.

You said — and I just want to go back. To me this is important.

You said nine on September 30th, September 12, you said in the days afterward, it wasn’t clear that it was a terror attack. You said in November right before the election, you said it’s unprecedented politicization. The politicizing was going on at the White House. And that email was clear evidence of it. And the State Department admitted in the new email just released — Sharyl Attkisson had the report — that the secretary of state, the assistant secretary of state Beth Jones said, Ansar al-Sharia (ph) responsible for this attack.

Notice all the cries on the Left of ‘this is preposterous,’ ‘this is a witch hunt,’ ‘that was two years ago,’ ‘we’re going to boycott the whole proceeding?’

All I have to say is Heavy Flak = Over The Target.

Spot on John, spot on.

“No, I think, you know, lawyers have spoken to this and it’s out now. I think, listen, what Benghazi was was a tragedy. What we need to do is figure out how to prevent it from happening again and to try and hold those accountable, as we did bin Laden.”

Yah, dude. That’s what we ARE doing. And we’re going to insist on it…holding those responsible to account.

THOSE include Pres. ScamWOW. We want to know where he was, what he knew, when he knew it, and what he did about it.

I mean BESIDES ginning up a set of lies they told for weeks afterwards, including lying in the faces of the Benghazi dead’s survivors and the wounded.

We insist. If you had a shred of integrity, there are questions you’d ask, too.

Lets check off the boxes in the liberal playbook!

Deflection – Check “We need to make sure this doesn’t happen again.”

Distraction – Check “We got Bin Laden!”

Yep, they realize they are in deep doo folks and they are in full “CYA make it go away” mode.

So, Plouffe, who, what, where, when, and why? Were Americans killed or left to die as an outcome of incompetence or malice? You may not care. It’s just another abortion/murder, one of millions annually, right? But there are people who still cling to a faith that human life is not merely a commodity.

DAVID PLOUFFE, DEMOCRATIC STRATEGIST: No, I think, you know, lawyers have spoken to this and it’s out now. I think, listen, what Benghazi was was a tragedy. What we need to do is figure out how to prevent it from happening again and to try and hold those accountable, as we did bin Laden.

Yes, that’s what we’re trying to do. Hold those accountable who were responsible. Those who had a duty to prevent this, those who had a duty to intervene and ameliorate it once it commenced, and those who, whether or not they had an obligation at the time, subsequently repeatedly have lied about the facts. Lies themselves are bad acts.

Did he ever stop to think that maybe those responsible would be close to capture if him and his cronies hadn’t dedicated their reside to covering up this mess in order to get the President re-elected, but instead owned up to their failure and immediately and correctly identified the perpetrators

And I thought Bill Clinton was shameless.

Yeah, lying little scumbags like this guy have to stay inside the DC Beltway… where I come from he’d get his smug face bashed in for saying shit like that.

What clap-trap! You can see the lies spinning out, he almost lost it here. Anybody remember the great handling of the Cole bombing – under Bill Clinton?

“Investigators” were met at the airport by Yemen special forces with “each soldier pointing an AK-47”. Speakers in the Yemeni parliament “calling for jihad against America”, were broadcast on local television each night. The ‘guilty verdict’ came 7 years later.

Fourteen years later and we’re still having a trial!

We are in a Sept 10th world or worse.

At this point, there are only two types of people left supporting Obama: the stupid who either can’t understand reality or don’t care as long as their gummint gravy keeps flowing, and those who truly hate America and want to see her taken down a few pegs in the world, even if it harms our citizens economically and otherwise in the process.

Plouffe is a despicable liar whose unenviable task is always to make the sow’s ear look like a silk purse. No sale this time, Comrade.

For two years they have maintained that it was the defense community that came up with the youtube video sham. And I suppose they can continue to pretend that is the case. But now with this email what they cannot do is claim that the direction to emphasize the video over a broad policy failure did not come from the White House. Sure this should have already been obvious to all but the most dense leftists, but now it would really be a stretch to try to argue that Rhodes recommended the politically expedient thing because the CIA told him to. And let’s not forget, THAT is the real scandal here. Not that people died, out that there was confusion about a video. The real scandal I’d that the White House intentionally misled the American People, the news and our elected officials in an attempt to cover up the administration’s policy failures, and even worse that they continued to hide the truth of the matter to such an extent that it likely hampered the active investigations into this matter and helped those responsible get away.

I want to see this inquiry politicized … so that it exposes Mrs. Clinton as the craven criminally incompetent self-important feckless far left liar that she is. Loud and clear before the 2016 election. Save us from her.

It may be beyond the scope of the House committee to find out what — in addition to the Benghazi security, defense and coverup issues — I would like exposed: what led up to Benghazi? Why Libya … why Gaddafi? Who and how did the US Middle East policy get turned completely upside down? Egypt and Mubarak? Betrayal of Israel? Support for a nuclear Iran? Syria? The whole Muslim Brotherhood love …turning Turkey into a closed state ….

All this with Mrs. Clinton running the US State Department.

Multiple angles of Hillary knowingly lying to parents, literally over the bodies of their sons, and knowingly setting up an innocent youtube video maker to take the fall. He’d be arrested and jailed based on her political needs. Nice.

Multiple snippets of various TV and radio news shows wherein supporters of Hillary cannot offer one single achievement from her years as Secretary of State, plus a couple where *Hillary herself* cannot list a one.

MSM reporters will never do it, but if some enterprising conservative blogger were to include Hillary’s two terms as US Senator (NY) to the question of Hillary’s accomplishments in office, he/she would learn that she *still* won’t be able to list a single achievement.

Run these in ads over and over again, punctuated by the jarring bray of Hillary’s distinctive laugh-cackle.

Why don’t you all impeach them??? Ohhh crap no evidence..

Some idiots insist on being lied to. They seem to love being punked.

by this time next year he will be riding marine one into the sun set. bye bye marxist scum.