The August 5 primary is the last, best hope. 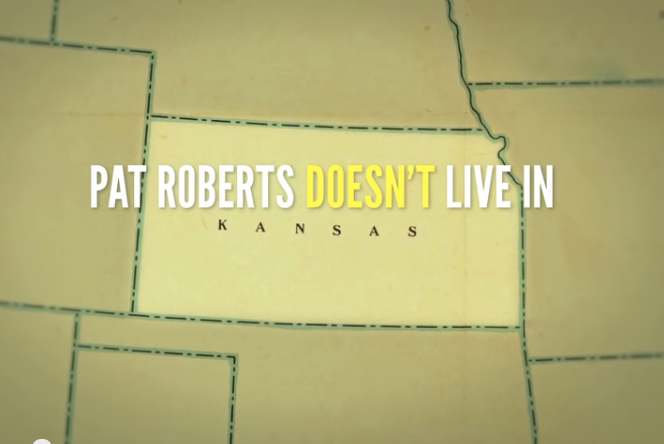 One of the big issues in Dr. Milton Wolf’s challenge to Pat Roberts in the Kansas Republican Senate primary is that Roberts isn’t a resident of Kansas.

Roberts hasn’t lived in Kansas in any meaningful sense for decades. Unless you consider renting a couch being a resident:

So Wolf’s campaign supporters filed a challenge to Roberts’ ability to appear on the ballot because Roberts doesn’t meet the residency requirement.

The elections panel deciding the issue all had endorsed Roberts. although they sent “substitutes” to the meeting:

Secretary of State Kris Kobach, Lt. Gov. Jeff Colyer and Attorney General Derek Schmidt, all Republicans who’ve endorsed Roberts, comprise the Objects Board. But all of them sent substitutes to the board meeting.

The Board qualified Roberts for the Ballot.

Sen. Pat Roberts is not a Kansas resident, at least not in the sense that most people understand the word “resident.” He hasn’t been for a long time….

Roberts shouts back that he’s the real deal. He rents out a home he owns in Dodge City and pays $300-a-month rent to two longtime supporters in Dodge City to stay in their home when he’s around.

That, he says, makes him as a resident.

The Objections Board, comprised of statewide pols who have all endorsed Roberts, agreed.

The residency issue in Indiana sunk longtime senator Richard Lugar in 2012. If it catches on in Kansas, it could sink Roberts too….

This week, a USA Today story based on Senate financial records concluded that Roberts spent 97 days in the state between July 2011 and August 2013.

A lot of the press lately is that Mississippi is the last best hope for Tea Party supporters to unseat an incumbent.

Don’t count out Kansas. The primary isn’t until August 5. An energized focus on Kansas actually is the last best hope.

About ten years ago, my wife and I took a brief flight to Tucson from Dallas to meet up with friends.

On that plane was the Republican representing part of the Tucson metropolitan area. He was flying coach.

We found out that he made that trip every week, flew coach, and had a car at the airport. He drove himself home.

He has since retired.

But, guess what we thought of his qualifications to represent his district.

In the 1980’s my family was flying back from Ohio [Columbus, Ohio-Chicago-Denver] where we had gotten my father settled in a hospital after what turned out to be his final heart attack. We were flying as cheap as possible. On the leg from Chicago, sitting right behind us was Mike Strang [R CO-3] who was my Congressman. He flew home every weekend to his ranch in the mountains west of us. I feel kinda sorry for him, because I had him cornered for a couple of hours and as you may have gathered; I am a wordy and opinionated bugger. But until Mike retired, he was both one helluva good Representative and an old line rancher. He knew what his people wanted and thought because unlike modern Congress-critters he lived among them.

As far as Pat Roberts is concerned, it is merely the Republican version of John Conyers in Detroit. Conyers failed to meet the petitioning qualifications to get on the ballot [after doing it every election for 50 years]. A Federal judge appointed by Obama literally a couple of months ago ruled that forcing a petition carrier to be a registered voter violated the carrier’s civil rights [two of Conyer’s carriers were unregistered convicted felons …. who were wanted again], and that so long as the candidate “had good faith” when gathering signatures, the letter of the law did not apply.

We live in a banana republic where the Nomenklatura, regardless of which wing of the Governing Party they belong to, are above the laws that we serfs must obey.

Pat Roberts has a lifetime rating of 86.40 from the ACU.

If you think it is important to unseat him, you are definitely out on the lunatic fringe.

Again, the problem with all these so-called “tea party candidates” (I don’t recall being asked to vote on any of them, so it seems just asserting the title is enough) is lack of proper vetting. Fox, for example, posted patients’ x-rays on Facebook without permission. They weren’t identified by name, but if you think that’s okay, well . . .

And his tactic seems to have been the Obama Plan – disqualify your opponents from the ballot. But hey, that’s okay, ’cause he’s “tea party,” right?

Let’s review this “revolution” so far: in six years and three cycles so far, exactly two GOP incumbent Senators have lost primaries – but only Lugar was unseated, because Murkowski won as a write-in over the inept Joe Miller.

At this rate, it has been calculated you will unseat all 47 incumbent Republicans in only 282 years!

So I guess you could say you are in it for the long haul, then?