The straw man has feet of clay

The straw man has feet of clay

Some say leftists are sick and tired of Obama. 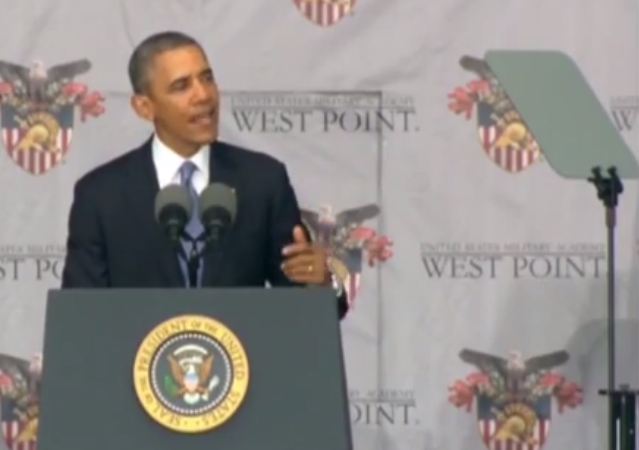 Even the Washington Post seems to have noticed lately that Obama has been attacking a host of strawmen.

And the WaPo is not alone; the NY Times suggested something similar when it wrote, as part of its editorial about Obama’s West Point speech: “In some ways, that was a straw-man argument…”

Actually, Obama has been attacking strawmen from the beginning; it’s one of this favorite ploys. But something has changed ever-so-slightly. Even the left is frustrated with him, and the frustration has been growing.

Why might that be? Do they think he looks dull and disorganized rather than smart at this point?

Were they still expecting more from him in that speech at West Point? Not necessarily different content, but perhaps something more resolute-sounding, more eloquent, more firm? Are they now embarrassed about their previous fulsome over-the-top support for him?

Don’t get me wrong. I don’t for a moment think that they are changing their politics; they’re not about to come out for Republicans or conservatives. I think they have just become more and more disgusted with Obama’s weakness and repetitiveness, and his reliance on words, words, words.

Of course, that was always true of Obama. But previously they believed he could deliver in many areas, and most definitely in this one area in particular: making the world respect us, getting along well with other countries. And so when NBC’s Richard Engel says he’s “hard-pressed” to find one country where relations with the US have gotten better under Obama, you know that the disillusionment has grown so large that some can no longer pretend as well as they did before. They’re exhausted with the effort it requires.

Barack Obama’s speeches have always been composed—from the very start of his national campaign, when I first began to follow him—of some combination of these things: platitudes, self-references, outrageous statements (lies, or promises that turn out to be lies), passing the buck to others, criticizing the US, ascribing bad motives to the opposition, and attacking strawmen. Has he ever had any other arrows in his quiver?

He’s still doing all of this, but even the left seems to be getting a little bit sick of it (does that mean they’ve turned into racists?).

Oh, I suppose it would still be okay with them if his accomplishments were more obvious. But the biggest one so far, Obamacare, may turn out to be a pyrrhic victory.

That could all change, of course, if immigration “reform” passes. Ensuring a permanent Democrat majority and making the American people more and more dependent on big government would be the biggest accomplishment of all.

I don’t know about leftists.
I became tired of Obama way before he became President.

We’re heading into the midterm elections and Obama is underwater in the polls. The media is going to start casting out in search of the new “One” and Obama’s looking old and busted. Depending on the results of the elections this fall, we may see a whole herd of democrats running away from Obama at full speed.

Well, I think we should put up signs with arrows pointing left so the herd will know which way to go. Of course, we need to take down the signs warning of the cliff ahead.

Then we share a huge bucket of popcorn and watch the show.

I think they are just gearing up for the shift to Hillary.

Obama’s tanking in the polls hasn’t hurt the Dems. Much.

Shift to Hildebeast? The Butcher of Benghazi? Surely you don’t think the donkey party is that delusional?

Not so much delusional as having few other choices with anywhere near Killary’s name rec and $$$. (Ability is irrelevant).

Delusional is attacking one’s conservative base five months before midterms.

Hillary will lead them down the path of destruction too. She doesn’t care about anyone but herself. Oh they have others just as stupid as Hillary is.

You are absolutely correct. The MSM and their democratic party handlers have to tell the public something about why America under their stewardship is such a disaster. They can’t hide it any more. The strategy will be to say that President Obama meant well and his ideas were correct, but he was too inexperienced and incompetent to do the job.

Sec. Hillary Clinton will do much better because of her vast experience in government. And when her detractors point out that her experience is composed of (1) her husband’s experience, (2) a long list of personal failures (e.g. the meltdown of her healthcare reform proposal, her undistinguished single term as a Senator, and a long list of foreign policy failures as Secretary of State), and (3) an even longer list of crimes. Whereupon anyone who dares to point out that Ms. Clinton does have a record of achievement will be denounced as a misogynist who is attacking a woman.

There is a huge number of women voters who were ticked off that Obama beat Hillary for the nomination. They will demand that she be President, and she’ll win easily.