Not a smidgen of problems at VA

Not a smidgen of problems at VA

Bet you can’t wait until Obamacare is fully implemented. 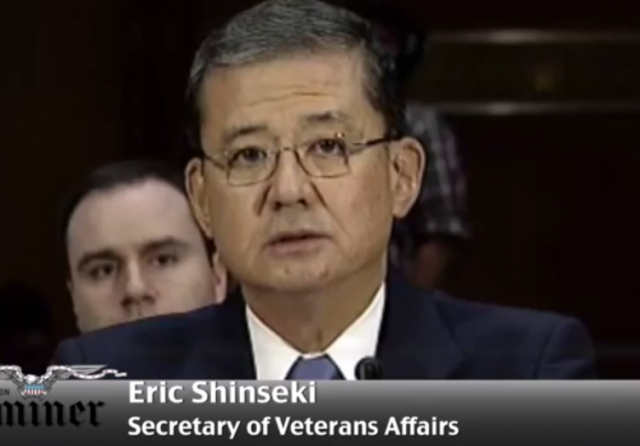 Delaying medical care to veterans and manipulating records to hide those delays is “systemic throughout” the Department of Veterans Affairs health system, the VA’s Office of Inspector General said in a preliminary report Wednesday.

Investigators with the Inspector General’s Office also said their probe into charges of delays in health care at a VA hospital in Phoenix shows that the care of patients was compromised.

The probe found that 1,700 veterans who are patients at the Phoenix hospital are not on any official list awaiting appointments, even though they need to see doctors. Some 1,138 veterans in Phoenix had been waiting longer than six months just to get an appointment to see their primary doctors, investigators found.

There is absolutely no excuse for this. I am outraged on behalf of all veterans who have been abused by the VA, but particularly those in my home state of AZ. Phoenix has plenty of excellent doctors, and if the Phoenix VA couldn’t handle its patient load, it should have contracted out the work. Instead, it allowed vulnerable veterans to suffer and die — all so some idiot bureaucrats would get their bonus money. It is beyond sickening.

We need to bring back the stockades.

since he lacks the moral character to do the right thing on his own, may i suggest that Shitseki be strangled with a black beret…

i’ll donate mine for the cause.

been trying to update this as it goes but I know I am falling behind.
guests can update if anyone sees anything I have missed

You can get rid of Obama and Shinseki but the real problem remains, civil service pukes. Congress will not do anything to make these clowns accountable to those they serve so the civil service pukes will still have their jobs and will continue to hose over veterans just to get a bonus.

This problem dates back to 1970, that I know of. It never received much attention until now, so who knows if it is better or worse?

Although I have never known a government program to /improve/. Just that we have no actual history to compare today to.

Forget the lengthy debates with advocates with Single Payer and “Universal Healthcare”. From now onwards, you can shame them just by saying ‘VA Healthcare system and Shinseki’.

old H.L. would be spitting in his hands right about now …

I’ll hand him the knife.

Say it with me, people…

This is NOT a new problem. Which is why we have a mile of tape on which Candidate Obama talks about how he’s going to fix it. A. Freaking. Mile.

But it is NOT fixable. It just IS the way it IS. You can make it somewhat better, but that is a palliative. It is not a repair.

A thing that is, by its very nature, PRONE to produce this kind of performance is not something it is rational to expect good results from.

Get rid of the monster. (Along with all its cousins!)

Is there a single federal government agency that ISN’T a huge fustercluck?

I can’t think of one.

“reports say” Who the freak read the reports? How far up did the “reports” go? We need to find the highest recipient and fill him full of sodium pentothal.

For the record, the problems with the VA have been years in the making. What angers me the most is the failure of many people to identify the common failing of our President; selective accountability. Mr. Obama cannot run to a camera fast enough to condem those who harbor views that differ from his own. But he does nothing to address issues that fail to interest him.
When you are in charge, you must address ALL issues under your stewardship; not just the ones you prefer. Mr. Obama does not hold his cabinet accountable because the bulk of the voters are not holding him accountable. Mr. Obama’s answer to fix the VA was to request more money. While money is always needed, throwing good money after bad is like giving an alcoholic a bottle of liquor.
6 years is more than enough time to address the issues. And if you do not think he was not informed, just ask Sen. Obama who bludgeoned Mr. Bush over the very same VA.

Shame Mr. President. I and my fellow disabled vets have paid for our rights to receive quality care. Have you?