There isn’t enough popcorn in the world… 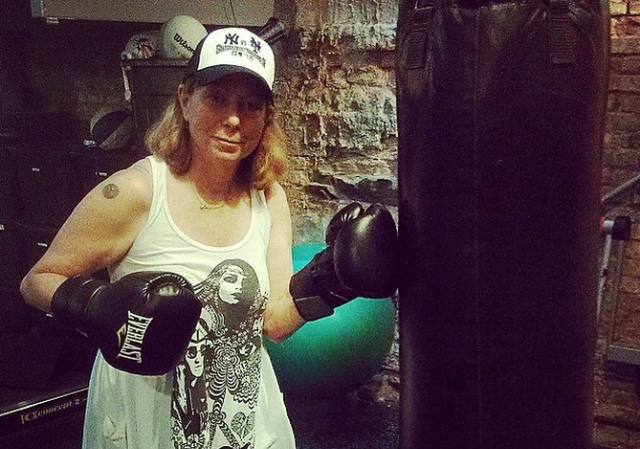 I just don’t know how much more I can take of the escalating brawl between The NY Times and its fired Executive Editor Jill Abramson.

The Times responded by playing the “nuts” defense on Abramson.

What did I do to deserve such pleasure?  Please tell me so I can do it again.

This latest, though, is just precious, via Hollywood Reporter (h/t @DrudgeReport)(emphasis added):

In her first public appearance since she was, as she put it, “fired” by the New York Times last Wednesday, Abramson preached resilience to those now also uncertain of what they would be doing next….

She also revealed that Anita Hill was one of those who reached out to her in the wake of her firing, saying “those messages have been so appreciated.”

Does anyone know if Sandra Fluke has been heard from yet on this?

A 60 year old corporate woman with tattoos. How mature. She looks as if she has a personality that could peel paint.

I’m taking bets on whether Professor J replaces Vassar’s disinvited commencement speaker and whether he, in turn, is disinvited.

Sandra Fluke. Now there’s a candidate for “Most Fascinating Person.”

Tempest in a teapot!

Too much of stretch trying to be funny.
George Bernard Shaw, a socialist, gave us this from Man and Superman “Bob: I’m so discouraged. My writing teacher told me my novel is hopeless. Jane: Don’t listen to her, Bob. Remember: those who can, do; those who can’t, teach.”

Not true. If you really wanted to learn you would seek out those who do it best. I would suggest avoiding public school teachers.

Sandra Fluke will weigh in after she comes up for some air.

That gave me a mind picture that needs some eye bleach. And I know you catch my drift so don’t deny it. 🙂

… from bragging that she fought Rush and won. What did she win, BTW?

“What did I do to deserve such pleasure? Please tell me so I can do it again.”

All I can say is that climate change works in mysterious ways. It affects us all equally unequally.

A word of caution:
As Ming the Merciless once said, “Those who break through glass ceilings often require multiple stitches.”

Esther used to have slightly flabbier arms, some said she could make one helluva hamburger patty in her armpit. How bout you Jill? Everything about the photo-op, you are doing it wrong.

Abramson co-authored “Strange Justice” about the Thomas hearings. No doubt Hill, in addition to being the star of the book, was likely also a major source.

Smell Hillary and her fake war on women all over this.