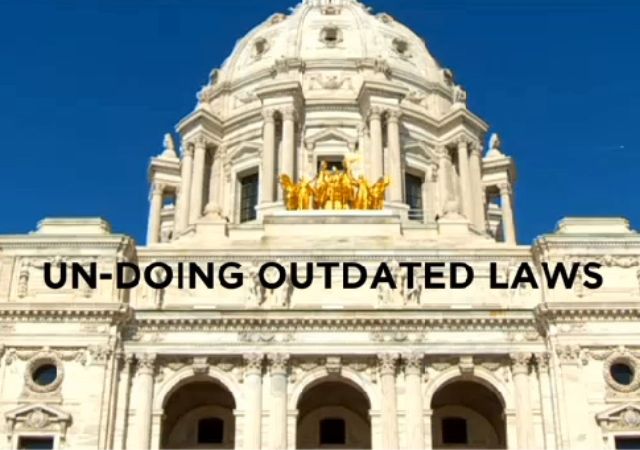 Lawmakers in Minnesota have repealed a number of obsolete and unnecessary laws as part of an “unsession” initiative.  In addition, they also implemented several reforms aimed at cutting bureaucratic red tape, simplifying filing of tax returns and speeding the business permitting process, among other reforms.

It’s no longer a crime in Minnesota to carry fruit in an illegally sized container. The state’s telegraph regulations are gone. And it’s now legal to drive a car in neutral — if you can figure out how to do it.

Those were among the 1,175 obsolete, unnecessary and incomprehensible laws that Gov. Mark Dayton and the Legislature repealed this year as part of the governor’s “unsession” initiative. His goal was to make state government work better, faster and smarter.

“I think we’re off to a very good start,” Dayton said Tuesday at a Capitol news conference.

In addition to getting rid of outdated laws, the project made taxes simpler, cut bureaucratic red tape, speeded up business permits and required state agencies to communicate in plain language.

“We got rid of all the silly laws,” said Tony Sertich, the Iron Range Resources and Rehabilitation Board commissioner who headed Dayton’s effort.

Legislators also did away with a number of unnecessary advisory boards and other government panels, the Pioneer Press reported. Some unsession ideas were submitted by state employees and Minnesota citizens.

Legislators launched an initiative that got rid of more than 30 advisory boards, councils and task forces that had outlived their usefulness.

Dayton thanked the “hundreds of state employees and thousands of Minnesota citizens” who submitted unsession ideas.

Democrat or Republican, no matter to me – I wouldn’t mind seeing more of this in other states.

You can hear more about the initiative in this CBS Minnesota News video report below.

I can’t think of many laws that shouldn’t have a 5-10 year Sunset provision. When I was a kid there was a common saying which went, “Ignorance of the law is no excuse.”

In 2014 it’s a [email protected] good excuse since even law enforcement doesn’t even know some of them.

“And it’s now legal to drive a car in neutral — if you can figure out how to do it.”
Either no hills in Minnesota, someone dumber than the law.
Neutral on the downhill, sometimes called Mexican Overdrive.

In the 60s I heard truckers refer to it as a “Georgia Overdrive.”

Yeah, coasting in neutral was always “a’gin the law” when I was a kid. The reason, my old Driver’s Ed teacher explained, was that so many early vehicles (pre-synchromesh) were hard to reengage into gear, especially at higher speeds. Coupled with old-style brakes, a coasting vehicle could easily fail to stop, especially in hills or mountains. In other words, the transmission was always a braking device.

Good for Minnesota. Not a state where I would have expected this.

Wish Illinois would do that.

Or, just get rid of the Democrats. Same thing.

Would love to see this repeated at the federal level should republicans win back Congress and the White House!

“We got rid of all the silly laws”

While the idea is nice, the examples provided show they repealed laws that aren’t being enforced anyway (e.g., “carry fruit in an illegally sized container”). And 1,175 laws plus 30 advisory boards, councils, and task forces form only a tiny portion of the number of laws and government agencies that control every aspact of our lives.

Cute story, nice gesture, but ultimately of little value in removing the chains that bind us to the state. Instead of making me feel a glimmer of hopeful anticipation, somehow this story makes me feel cranky, curmudgeonly, and crushed.

It has to start somewhere.

Sounds like a scene from Idiocracy, about the “UN”.

Anyone remember when it was the Left that pushed things like this? It depends who created the laws.

What Minnesota did is a good start. They will need to do this yearly for the next decade and it will get harder as one pares down the law. But it’s one of the better bits of news I’ve read this week. Thank you Mandy!

All states have tons of bad laws, many of which are regularly enforced.

Coasting in neutral is a safety issue, though. You don’t have the same braking power or distance when you coast in neutral.