Legal Insurrection looks more like America than many liberal publications

Legal Insurrection looks more like America than many liberal publications

and has greater gender equality than The NY Times. 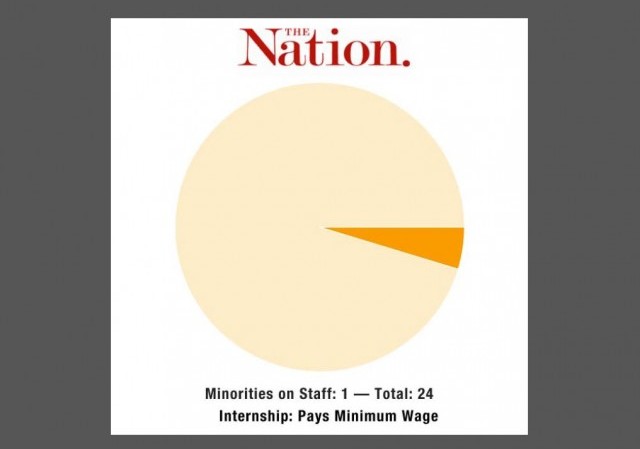 Today is the day the obsession with diversity counting comes home to roost at liberal websites.

Bring out the bag of popcorn.

The NY Times Public Editor bemoans that only about one-third of the reporters are women, Still Talking About It: ‘Where Are the Women?’

“We’re acutely aware,” [Janet Elder, deputy managing editor] said. “It’s a problem here and it’s an industry-wide problem.” At The Times, she said, about a third of the roughly 400 reporters are women.

"Where are all the women?" @Sulliview asks. Roughly two-thirds of @nytimes's 400 reporters are men. http://t.co/3PeNCEM9Rb

We have that beat easily. Look at the 12 regular contributors (including me) in the sidebar — fully half are women. 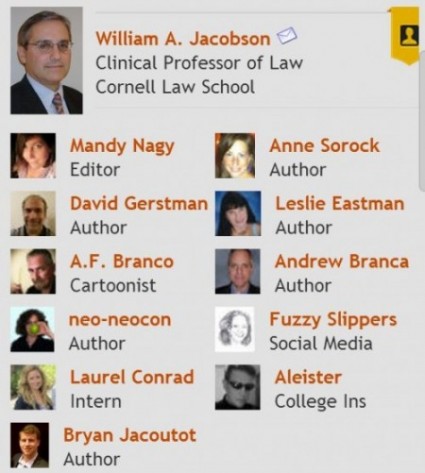 Bring out the large bucket of popcorn.

The ever-liberal The American Prospect notes that liberal publications are very, very white, The Unbearable Whiteness of Liberal Media:

If left-leaning publications value diversity, why don’t they have any?

…. Nearly 40 percent of the country is non-white and/or Hispanic, but the number of minorities at the outlets included in this article’s tally—most of them self-identified as liberal or progressive—hovers around 10 percent. The Washington Monthly can boast 20 percent, but that’s because it only has nine staffers in total, two of whom belong to minority groups. Dissent, like the Prospect, has one. Given the broad commitment to diversity in our corner of the publishing world, why is the track record so poor?

As to ethnic diversity, one of our regular contributors is more Native American than Elizabeth Warren. I’ll let you guess who. Which gives us ethnic/racial diversity equal to or better than many of the leading liberal publications: 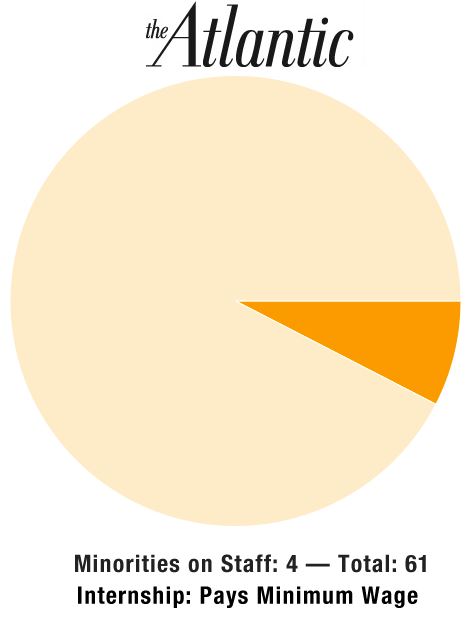 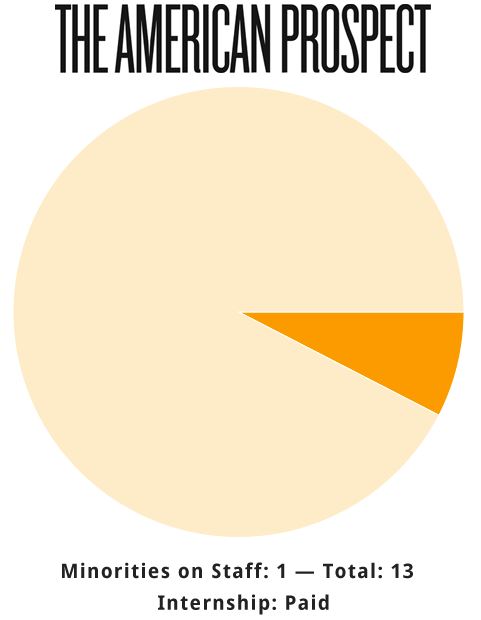 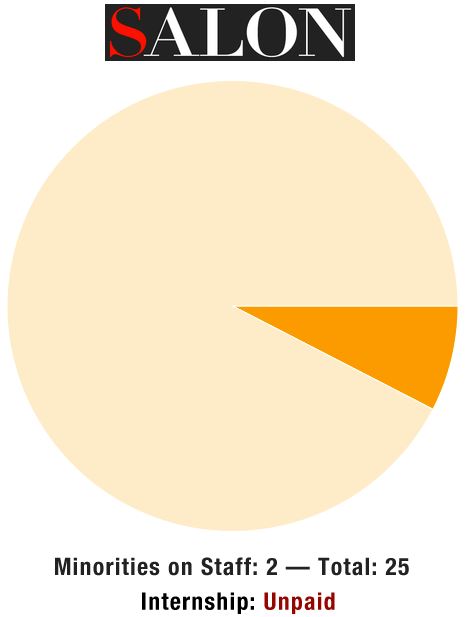 Now can we just get back to work?

With the possible exception of Branca, I’m not seeing any transgenders on this staff.

I know, I know, but I couldn’t resist. Besides, YOU were supposed to beat me to that one.

Heh! And you thought I held the door open for you out of courtesy…

I’m white today, so it’s expected of me.

Oh, boy, another reason to skew the media further to the Left. (I wonder if it is still true that female reporters are typically unmarried. Now, if they recruited former housewives – THAT would be diversity.)

PS = The reason of course, is that left-wig publications might as well headline themselves =- WE ARE THE 1%.

Plus, the women here are beautiful, as well as fearless, advocates.

Yeah, well, you can’t spell Legal Insurrection without erection, and I think he did that to boost pageviews from all the pervs out there playing with their search engines … guys like … well, … DMS, for example.

LukeHandCool (who, prodigious chap that he was, was sitting in Ms. Maddaford’s 7th grade English class reading along with the rest of the class silently as she chose one student after another to read a paragraph aloud. Luke read ahead and saw that one of the characters said blurted something out, followed by ” …’______,’ he ejaculated.” Luke was stunned and looked up at Ms. Maddaford while all the other students were looking down, reading along. When the student read aloud, “he ejaculated,” Ms. Maddaford looked up from her book and her eyes locked with the only knowing student who was looking up … Luke. Luke wanted to cry out in pain, convinced the young, gorgeous Ms. Maddaford now thought he was a disgusting pervert. But a week or two later, Ms. Maddaford was late to class. One of the students went up and looked at her role sheet. Next to each student’s name she had written a word or two to help her remember the students at the beginning of the semester. He got to Luke’s name on the roll and ejaculated to the class, “She wrote ‘Cute!’ next to Luke’s name!” Luke was back in business)

Maybe that is one of your problems: you are keeping track of sex rather than writing.

Now I have nothing against women. In fact I LOVE women. Some of my best friends are women.

But if you do nothing but keep track of the sex of your reporters…well, I hope you have good liability insurance because you are going to get sued.

Just do something intelligent, like joking about Warren as a socialist.

As Astro would say,

“Ruh-roh, somebody needs to get laid.”

It must’ve really hurt when you auditioned for that “White Guys: We Suck and We’re Sorry” video role and got turned down for being too creepy and suckish.

Hoisting the left with its own petard is a useful endeavor.

does being that stupid physically hurt?

So you couldn’t think of anything else to say on the Elizabeth “High Cheekbones” Warren story so you’ve come over here. I see. Some questions for you to ponder: Does the editorial content of The New York Times trouble you? Do you have a problem with the reporting by any of the women on this website? Some of your best friends are women; are some of your best friends black? Does math trouble you? Fractions are hard. Fully 50 percent (6/12) of the contributors here are female (i.e., women); The Atlantic: 4/64 = 6.55 percent; The American Prospect: 1/13 = 7.69 percent; Salon: 2/25 = 8 percent. Are you going to sue the Professor? Do you have a problem with socialists? There are plenty in Congress…Bernie Sanders, Jan Schakowsky…in fact, every member of the Congressional Progressive Caucus espouses socialism. Which ones trouble you?

We are here to help.

It’s always so fun to watch Collectivist haters, faced with the facts of their hypocrisy, just double down on their stupid with irrational attacks.

Over what would Jacobson risk being sued by NOT caring about the gender of contributors as much as the quality of their writing?

Remember now, this is NOT the Clinton White House and there is nothing to show that Jacobson is a serial sexual abuser of wimmins.

Ummm … Rags … as much as I love you (in a macho, firm handshake kind of way … well, I would curl a finger and use it to tickle your palm during said handshake to keep you guessing),

Have you forgotten the whole Meghan McCain Boobs incident that quickly got swept under the orange and black Legal Insurrection rug?

Are you telling me there are TWO Megan McCains…?!?!

I thought that one boob was sufficient. Damn…

If there were two Meghan McCains:

People who think socialism is great. Who go on about it. Who mention socialist non-thinkers like Piketty and how great his inane theories are.

Who look to socialist Euro-trash countries as being fantastic — and to be emulated. Like Warren, Obama, and all the Democrat crypto-socialist.

But then when it’s pointed out that they are, in fact, espousing socialism, it’s all…. HOW DARE YOU CALL ME/HIM/HER A SOCIALIST.

But only because even today SOCIALIST is a dirty word in America. And rightly so.

Of course the banal, so called rebuttal goes along the lines of — well Obama/Warren/et al aren’t calling or implementing the NATIONALIZING OF THE MEANS OF PEODUCTION so that “proves” they’re not “socialist.

Well, #1 They can’t do that constitutionally anyway. Obama can’t just “nationalize” an industry with an Executive Order.

But then he doesn’t have to. As both he and Warren know they can effect exactly the same results by fiat via rules, TAXES, regulations, laws.

In effect, it’s a quasi-nationalization by making the industry and business so beholden to the state — and particularly the Democrats, that they all to all intents and purpose nationalized.

In the America I know and love, the real trolls have at least a microscopic modicum of wit.

But, the day God was giving it out, DMS was absent, far away at that sucky audition.

Though this is the only blog I comment on, I scan/read 6-7 blogs daily, with occasional scans through their comment sections. Some blogs draw trolls that just absolutely get their regular posters all twisted up in knots, hopping mad, losing it. But in my time here at LI, it’s been one loser troll after another. No wit, no manipulative skills, zero debate skills, just a lot of ‘you guys are poopy heads’ for a day or two and they’re gone.

How can we improve the efficacy of our trolls? Stop using ten dollar words like ‘efficacy’ maybe? Point out that despite a higher than average prevalence ($10!) of attorneys among the LI commenters, a troll runs little risk of being sued? Free doughnuts?

Hahaha! Getting here late today. Great post, and great comments by the non-trolls!

About that “war on women”…

I for one an still not sure of anything about who lurks behind Neo-Neocon’s apple.