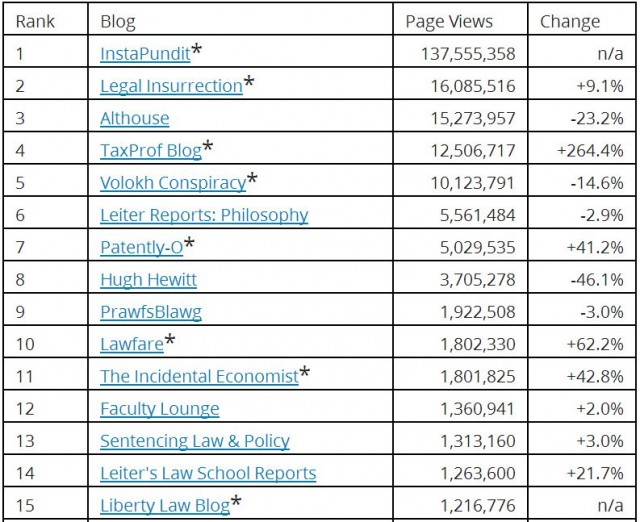 TaxProf has released the rankings of blogs run by law professors, for the 12 months ending March 31, 2014.

Go to Law Prof Blog Traffic Rankings for the full list, including percentage changes from the prior year.  The Top 15 are in the featured image.

Plus College Insurrection comes in at #19, a drop of two places even though traffic was up from the prior ranking period:

The asterisks reflect that the numbers are generated from the reliable Google Analytics, as opposed to Sitemeter, as to which some websites had reliability problems.

Congratulations, Professor! Good work here (and a complete train wreck over at that other leading site, now free-falling in the rankings).

Well earned and much deserved.

The only thing that surprises me is that Hugh Hewitt is so low. Maybe all his energy is focused on his radio show.

Speaking of which, you do have a hint of a Lennonesque Liverpudlian Scouser lilt in your voice. Radio gig?

How is Mrs. Jacobson with sharing you with millions of screaming, crying young girls chasing after you?

Also very good to see TaxProf moving up – with a bullet! Professor Caron has done yeoman work keeping the IRS scandal in view and up to date with the facts.

Congratulations, Professor J. Won’t be long before someone with deep pockets will come along and offer a deal you can’t refuse.

You didn’t build that.

Congratulations to the Great Professor!!

(And to College Insurrection – another essential read every morning!)