Couldn’t happen here, but I wish it would. 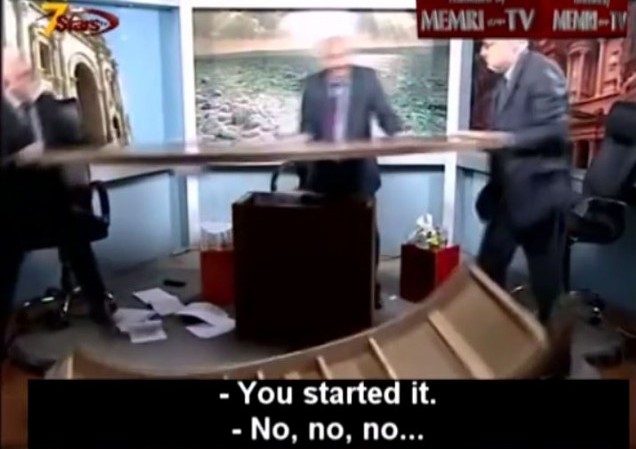 A heated discussion between two Jordanian journalists about the civil war in Syria developed into a brawl as the two demolished the studio in which they were being interviewed, forcing staff to step in and separate the two…

The journalists appeared earlier this week on Jordanian TV’s current events program “The Two Ways,” which airs live, and were taking part in a panel on freedom of the press in Arab states when things took an ugly turn. Shaker al-Jawhari, who supports the Syrian opposition, accused Muhammad al-Jayousi, a Baathist who supports Syrian president Bashar Assad, of being a “deviant.”

Now that’s how I imagined the Vassar debate.

I think I can speak for Professor Jacobson speaking for Dos XX’s ‘Most Interesting Man in the World” when I say,

But when they do, I’ve had to bloody my own nose on occasion.”

I’m surprised we haven’t seen that on MSNBC.

The religion of peace is at it again.

If this had taken place in Yemen, they would have whipped out their jambiya and started carving each other up so I guess it’s a positive thing that Jordan is a little more civilized.

Our malignant narcissist media covers zero world news of import. Oh if you want funny cat pictures from around the world – they’ll cover that, but real world news? MEOW!

After watching that video I have to admit I’ve been wrong all this time. Seeing those two Muslim media men go at it like that proves Islamophobia is very real and out of control.

Ya mean “Self-Loathing, and In-The-Closet” Islamophobia?

The video cut off just before the one guy screamed at the other,

“Yo Mama never had a clitoridectomy!”

As the historian Sam Huntington put it in his clash of civilizations*, Islam has bloody borders.

But as this tame (as far as Muslim infighting goes) video demonstrates, Muslims are constantly fighting one another (e.g., Sunni v. Shia; the whole thing in Syria, et alia). No surprise they can’t get along with non-Muslims.

*Before civilizations can clash there has to be two civilizations. As Geller expresses it, how can you reason with savages. Islam is from the 7th century, and Muslims are bound and determined not only to keep it and themselves there, but to bring us back there with them. No thanks.

“I have never seen such colorful people packed into a TV studio.”

Is this how you play Words With Friends?